So it's May and Mills on the Air is once again with us. Mills marks the start of the Clubs Special Event season. It presents its own special challenges but gives us an opportunity to ensure that equipment is available and operational, something that was to take us by surprise this year as you will see.

We have a new Special Events Manager this year, Mark M0SKV now handles our Special Events although historically this one has always been the province of one of our members, David G7BYN, who was taking a break having organised this event for more than 10 years, the last 4 years for the Club and prior to that as an independent operation with Don G0NQJ (sk)

David had very kindly allowed us to use the same Special Event callsign GB0SBM that he normally applied for and Andy G7KNA had made the application as Mark had only obtained his full licence allowing NoVs following the May 12 Advanced Exam. 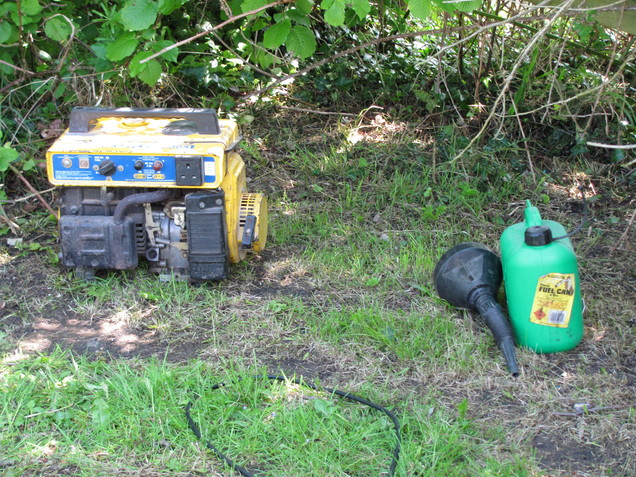 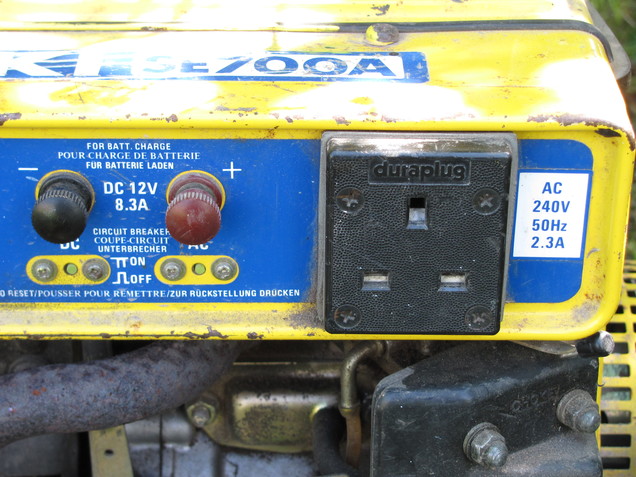 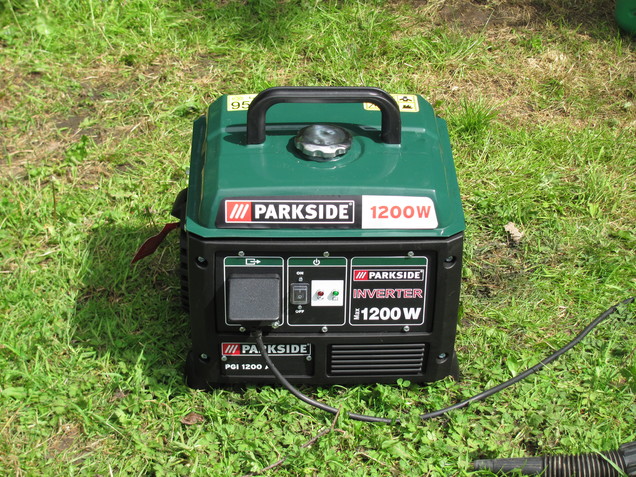 The event started with a bang, quite literally. John M6GTT along with Martin M0JEA, Mark M0SKV and Andy G7KNA were on site somewhere around 10:00 and had set up Johns caravan, the antenna and the generator which had been loaned by another Club member. Everything was ready, the genny was started and the switch mode PSU was turned on. At which point there was a rapid crackling and popping sound as incendiary sparks leapt from the back of the PSU – oops!

Fortunately the IC7000 had not been turned on at the time but the PSU was toast (to use a technical term). Consternation ensued, the genny was checked and to our horror was producing something in the region of 350V.

What now? Clearly we needed a new PSU but more importantly we couldn't plug the new PSU into the genny for fear of the same result. A second PSU was available but no second generator was on site. John M6GTT kindly volunteered to return home and bring his unit as a replacement, in the meantime there was some charge in the caravan, oops shack, leisure battery so that we could get on air in a limited fashion until the replacement genny was sourced. 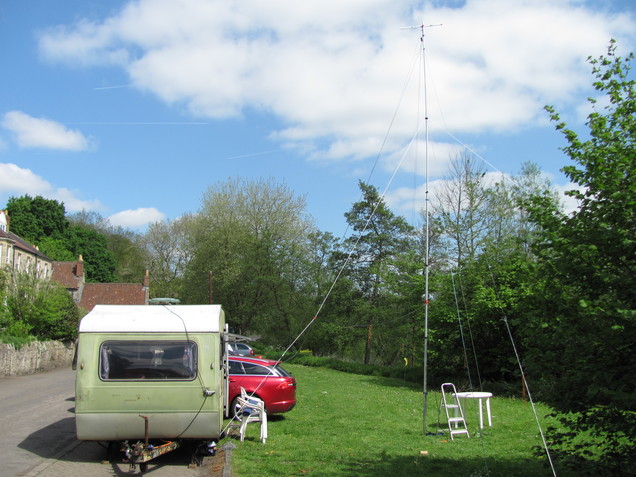 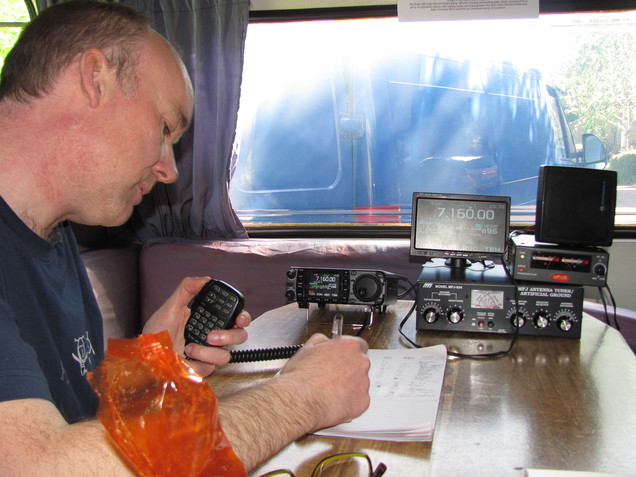 Our station was reasonably simple, if slightly different from previous years:

On the Sunday we swapped out the 2m dipole for a 3 element beam but there was enough HF activity to make this more or less redundant.

Getting back to the Saturday, working on the shacks leisure battery we struggled with propagation for the first couple of hours with little or none inter-G working that we had hoped for. We switched around the bands and worked a number of European stations including Finland on 50MHz which was a first for all of us. Around 12:30 or so the UK started to be workable on 40m. After that it was reasonably good working around 55 stations throughout the afternoon.

During the day we were visited by Cyril G3XED our Club President who gave us lots of encouragement and advice and as the only fluent Morse operator decoded one or two Morse messages we came across. With no key or PC on site we were unable to respond in kind, or more accurately Cyril was unable to reply on our behalf. 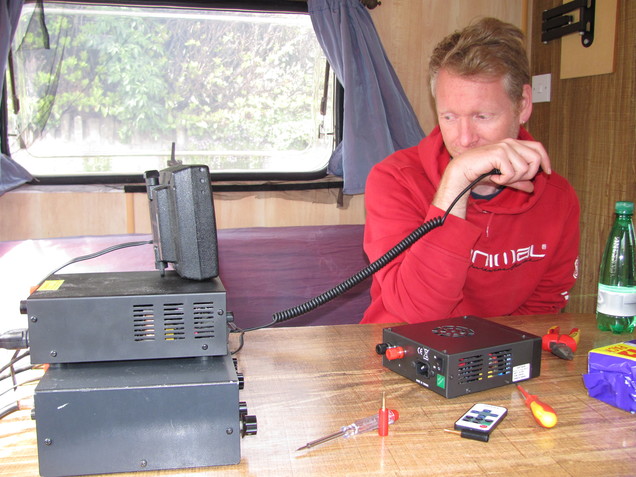 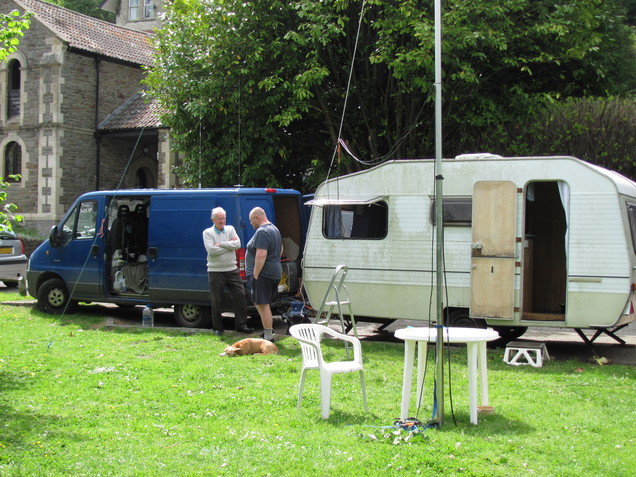 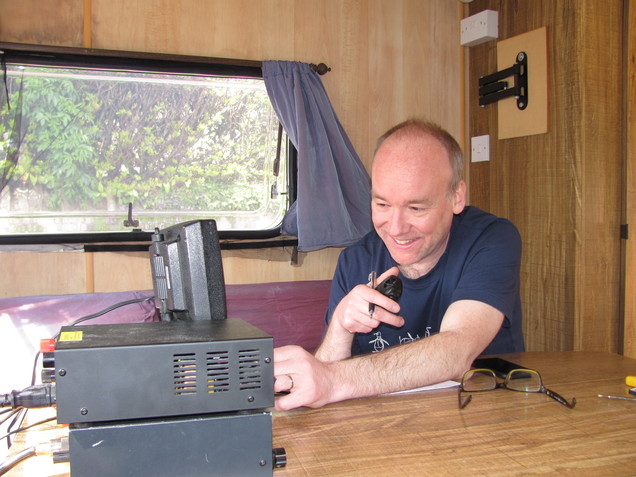 Sunday followed a similar pattern with the early propagation favouring European contacts until around lunchtime when the inter-G came in. By the end of the weekend we had worked 106 stations including 19 GB Special Event Stations.