South Bristol ARC operated the Club Station G4WAW/P from our regular location on Dundry Hill, the site is approximately 210m AOD (Above Ordnance Datum – Mean Sea Level at Newlyn in Cornwall), with a clear take off for signals to all points of the compass.

Great Views and a Superb Take Off in all Directions 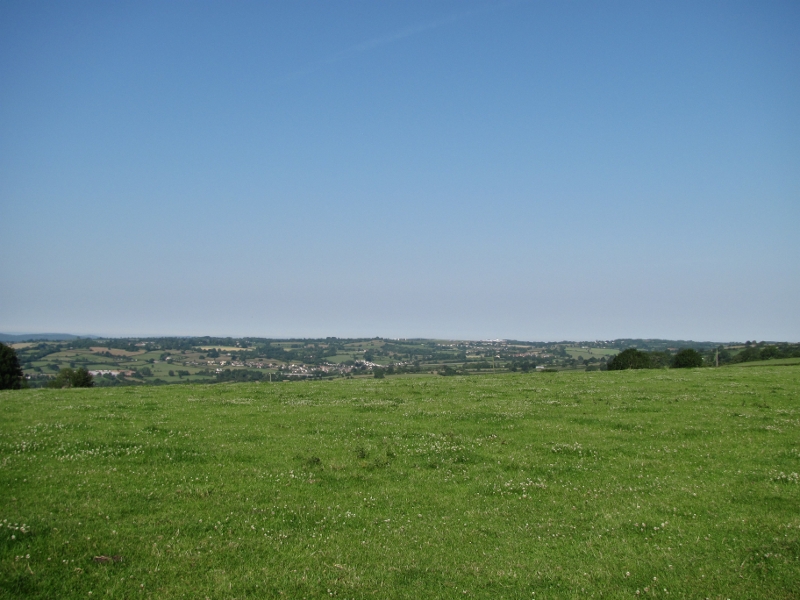 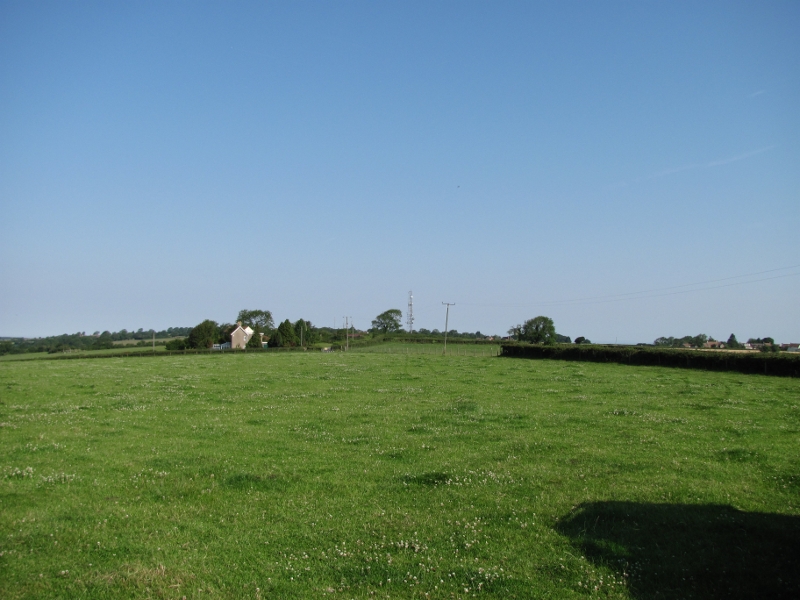 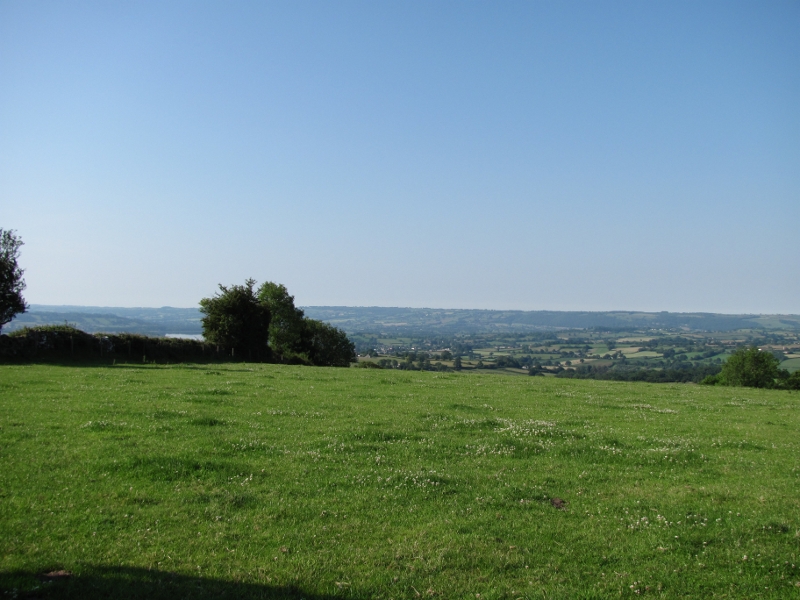 Weather for the weekend was fine, dry and warm with some members reporting cases of sun burn and liberal use of after sun lotion. 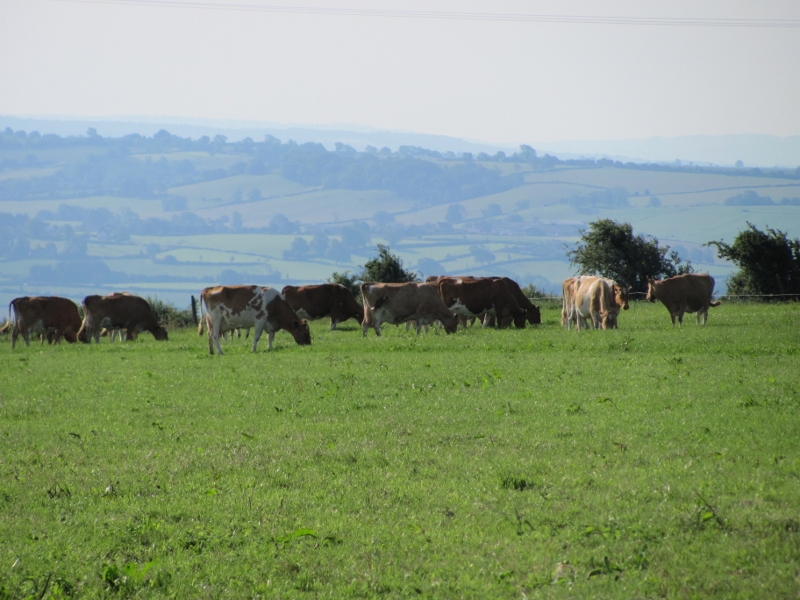 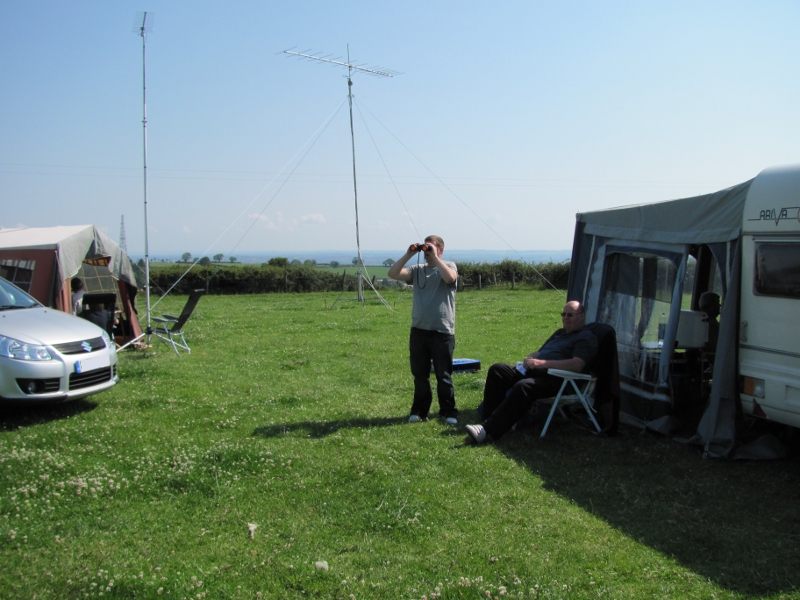 Even the aircraft operating to and from the nearby Bristol Airport weren't as frequent as in previous years although a number did make their presence felt at inopportune times, resulting in the need to ask for a repeat of details despite a 59 signal report both ways!

Final Approach to Bristol Airport – Right Over our Operating Location 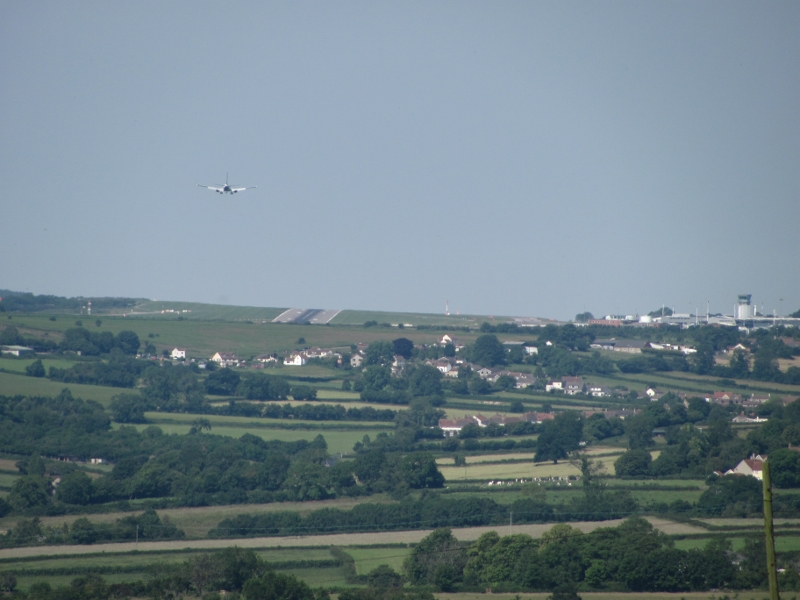 This year saw us mount two stations in the Low Power class, one on 2m and the other on 70cm. 70cms made a welcome return this year with our last outing on that band being in 1998.

Operating Accommodation – 2m in the awning on the left, 70cm in the tent on the right 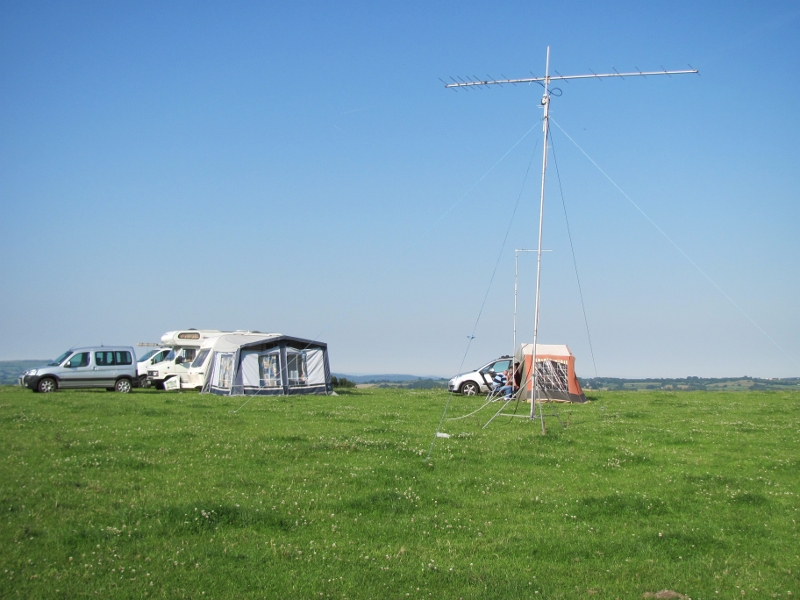 This year we had to assemble our equipment from a variety of sources. For 2m we operated: 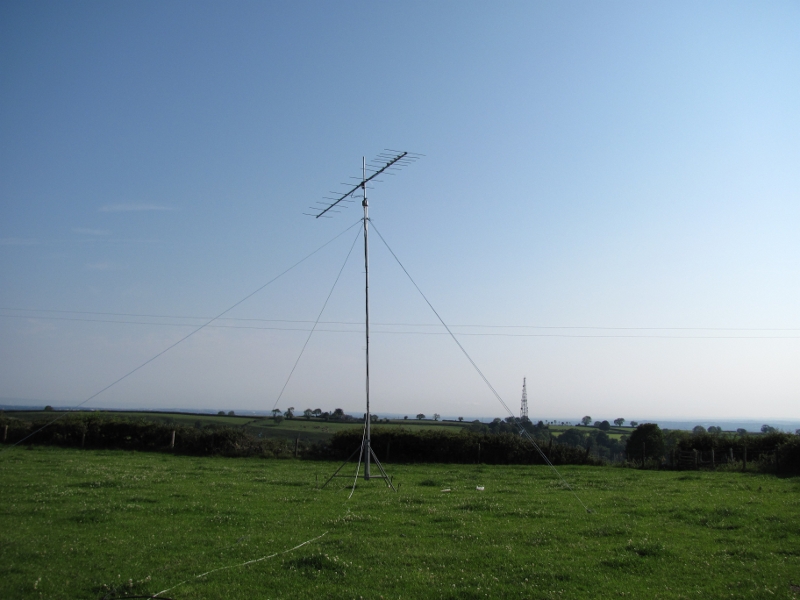 On 70cm a similar set up comprised:

The 70cms Team in Action 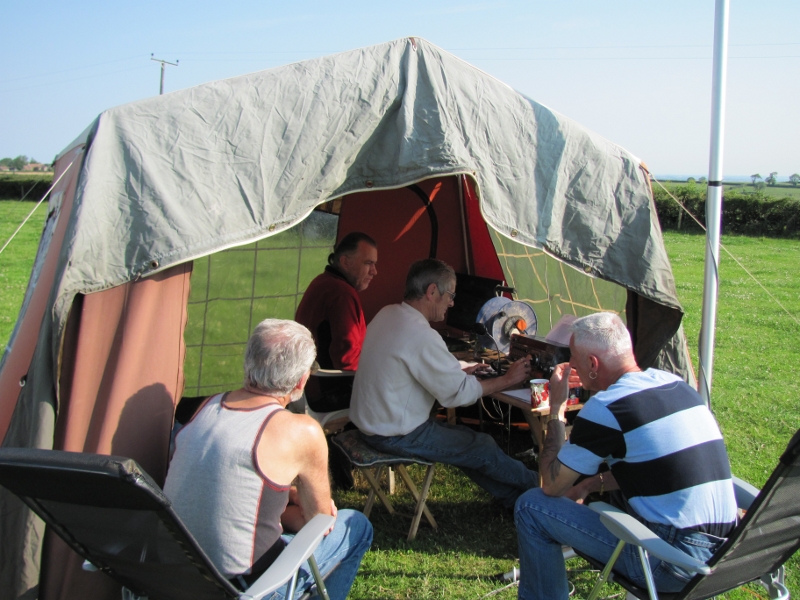 Both stations were powered from a single generator.

All equipment arrived on site by 10:00 BST and was set up with the assistance of several club members in time for the commencement of operations at 15:00 BST.

The operating rules for this class of the contest require that the station is only operated for 16 out of the 24 hours available, and that the shut down periods must total 8 hours and each shut down must not be less than 1 hour. This year we elected to shut the station down from 23:00 UTC to 07:00 UTC.

Against the patterns that we have experienced in previous years the low QSO rate between 21:00 UTC and 22:00 UTC did not continue into the 22:00 UTC – 23:00 UTC hour. In fact we found ourselves almost the centre of a mini pile up during this period, causing us to rethink our plans of going QRT around 22:00 UTC ready for an early start on the following Sunday morning.

Tables 1 and 2 set out the number of contacts made at various times in the contest on 2m and 70cm respectively. Overall 193 contacts were logged on 2m and 23 on 70cm, however it is known that for the 2m QSOs; 2 of these were duplicates and 1 occurred during our shut down period so the number of 2m QSOs claimed by the club is actually 190. This figure of 190 on 2m and 23 on 70cm is subject to adjudication and confirmation through check logs.

In previous years we have lost around 12% of the claimed QSOs through errors in the log either made by ourselves or by the other station in the QSO. These errors lead to the claimed QSO being discounted. If a similar level of error is experienced this year then the actual number of QSOs awarded is likely to be in the region of 170 on 2m and 20 on 70cm. This figure is higher, on 2m, than the number of QSOs awarded last year when we submitted 158 QSOs and were awarded 139. There are no records that permit a comparison on 70cm.

Overall a QSO rate of 11.29 QSO/hour was obtained on 2m, this equates to about 1 QSO every 5 minutes. In the case of the 2m QSO rate this is slightly up on the overall rate achieved in 2010. Although the opening couple of hours saw good QSO rates, the highest occurred late on Saturday evening, breakfast time on Sunday and in the closing hours of the contest, a very different pattern from previous years. The best hour was the last hour of the contest as stations scrambled for those last points. During this time we managed 26 QSO or 1 every 2 minutes although the actual activity was more concentrated than that.

Lowest QSO rates were recorded at 17:00 on Saturday and again at 21:00 on Saturday. In fact the slow down between 21:00 – 22:00 almost had us shut down the station in preparation for an early start the following morning which had paid dividends in previous years. Thankfully we persevered into 22:00 – 23:00 and were rewarded by the busiest hour of the first day.

Tables 3 and 4 below shows the points scoring profile on each band:

On 2m, the best points scoring occurred last thing on Saturday, early on Sunday and in the closing stages of the contest.

Patterns are less easy to discern on 70cm due to the relatively low numbers of contacts. Especially good contacts skew the results and mask underlying trends.

Tables 5 and 6 below shows the breakdown of stations worked by country on each band:

On 2m, the best DX was recorded into Spain at 948km. Sadly this represented our one and only opening this far south. The Spanish station asked if we were QRV on 70cm and attempted to contact our 70cm station after completing our 2m QSO. Sadly although the 70cm team could hear something it was not possible to complete what would have been a truly amazing 70cm QSO.

After Spain the distances dropped sharply, the next crop of distant stations were all in the 600km – 700km bracket and included a Scottish station and three German stations in descending order of distance.

On 70cm, we consider that some really good DX was worked for a band that few of us had any real knowledge of or expectations for. Best DX was 470km into The Netherlands, followed by 3 stations between 300km – 400km in Scotland, North England and Ireland respectively.

On 2m, 89% of all contacts were inter-G, that is within the United Kingdom. Only 11% were with other European countries.

As might be expected on 70cm there was a higher proportion of inter-G contacts, although only marginally. In this case 91% were inter-G and 9% were with other European Countries.

Tables 7 and 8 below show the spread of distances worked on each band:

The bulk of the contacts made (69%) were between 50km and 350km. The number of local contacts (i.e. those less than 10km) were surprisingly low at only 5% of the total QSOs made, very few club members were worked over the weekend which contributes to this low figure.

The bulk of the contacts made (61%) were between 50km and 350km. The number of local contacts (i.e. those less than 10km) were low at only 9% of the total QSOs made, very few club members were worked over the weekend which contributes to this low figure.

The average QSO distance was 158km, which compares well with the 2m average and was something of a surprise to many.

The VHF Contest Committee have published the results of this years NFD. We put in our usual credible performance. Looking first at the overall Low Power class we were placed 6th overall out of 13 stations. This might not, on first inspection, be considered a particularly special result in the light of past years performance. However, it should be considered that the overall position considers the performance on all of the bands entered as one. All of the stations bar one that finished above us submitted a 3 band entry and the only 2 band station to place higher than us used a combination of 6m and 2m as opposed to our 2m and 70cm. To more accurately reflect our performance it is important to examine our scores on the individual bands.

We were awarded 3rd place in the 2m Low Power Section and 9th place on 70cm.

The reduction in points was similar to that occurring over the last two years and the resulting average points per QSO becomes 188.8 compared to our initial estimate of 189.8. The limited change in points per QSO indicates a more or less random distribution of errors throughout the log.

This year the VHF Contest Committee have released the errors from individual station logs to give an indication of where improvements can be made. Looking at our adjudication log for 2m there are 18 errors listed so the bulk of our loss came from our own performance and not from errors at the other end of the QSO.

Many of these errors seem to be random, there is little if any pattern that can be discerned. The locators bear the simplest analysis since in 2 out of the 3 cases we recorded a V when the correct character was U. This is undoubtedly the result of poor handwriting and logging being undertaken from notes rather than by listening to the QSO. To avoid this in future we should always strive to have 2 operators: 1 to operate the rig and 1 to log in real time.

The 4th place entry scored 27,897 so we finished comfortably in 3rd place. The 2 stations above us scored 55,522 and 59,181 points respectively. It is clear that even with no errors we would not have got within striking distance of these operators.

The resulting average points per QSO becomes 143.5 compared to our initial estimate of 157.7. As with the 2m log the limited change in points per QSO indicates a more or less random distribution of errors throughout the log.

Looking at our adjudication log for 70cm there are 10 errors listed so the bulk of our loss came from our own performance and not from errors at the other end of the QSO.

There are some very definite patterns emerging from this error list, as follows:

The callsign errors are the most common. There was perhaps an expectation that all stations would be /p which was not borne out in practice. Beyond that the errors are typical mistakes that happen in the heat of a contest and only additional exposure to the contest environment will allow the individual accuracy to improve.

Our 2m operation continues to be a successful and solid entry. Attention to logging could improve our performance but is unlikely to drastically improve our overall position. On 70cm there is some work required to familiarise operators with the logging program and possibly the addition of something like a mast head pre-amp to assist with weak signals.