We had a number of new participants this year and it is thanks to them that we had a successful operation.

Starting a few weeks before the actual event we were beginning to have concerns over our antenna. 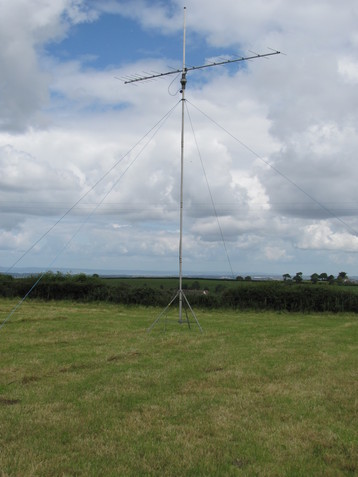 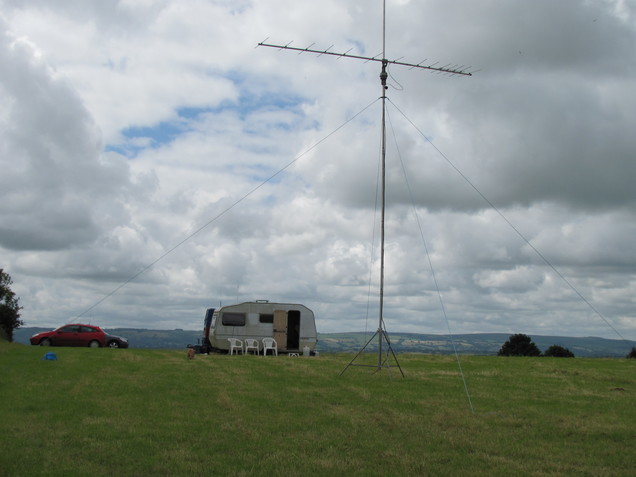 This antenna has served us well for a very long time but 2014 saw the onset of a few problems with SWR. That year, which had a number of problems, we quickly re-made the feedpoint connection on site which was probably the start of the antenna issues. In 2015 we continued with the same setup but noted that we had a higher than expected SWR.

This year we decided a few weeks before the event to get the antenna up at the clubhouse and check it out. A sweep with an antenna analyser showed the SWR to be off with resonance points above and below 144MHz – 146MHz.

The feedpoint system which is a complex arrangement of 4 driven elements of varying lengths similar to a log periodic antenna was stripped down, labelled and cleaned and the fixing screws were replaced by stainless steel fittings.

However this, whilst a worthwhile activity, did not resolve the SWR issue fully. Coax checks showed that the Heliax we had traditionally used was not in the best of health and a number of the connectors on the feeder had also seen better days.

Saturday was dry but on our exposed hilltop there was a lot of wind. Most of the time this wasn't much of a problem but when walking the antenna into the upright position it was a good thing so many of us had turned up to set-up. 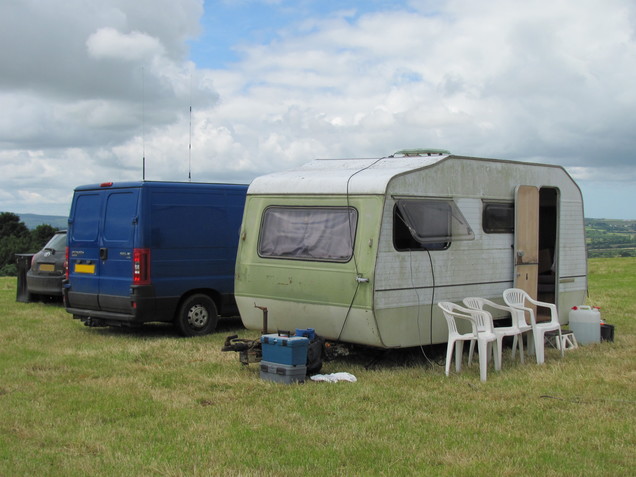 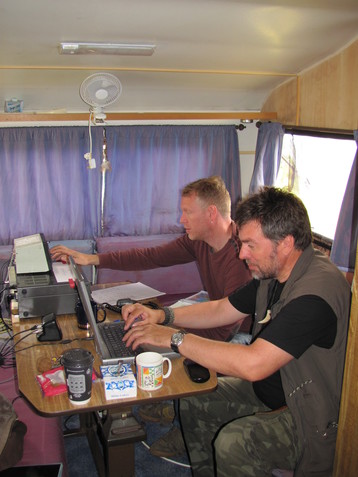 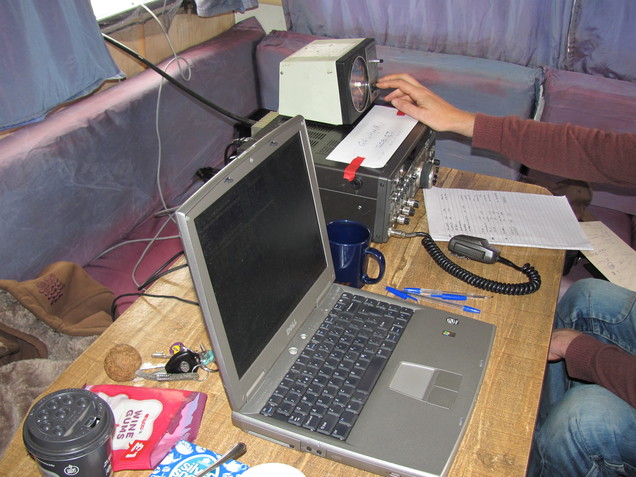 Our operation followed the precepts of previous years, our operating shack this year was kindly provided by John M6GTT and housed our operators, loggers, the Club's venerable Yaesu FT-736, a laptop running SDV for logging and the rotator controller. Outside our repaired and refurbished 14 element beam sat on a rotator at the top of an 8m tilt-over tripod mast. Power came from a 2.4kW 4 stroke petrol generator. 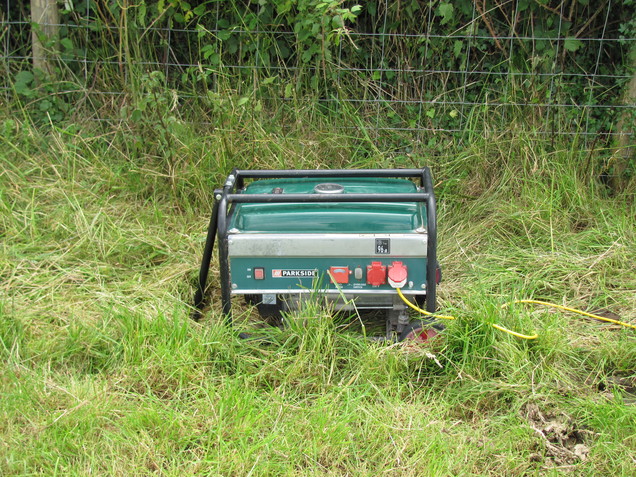 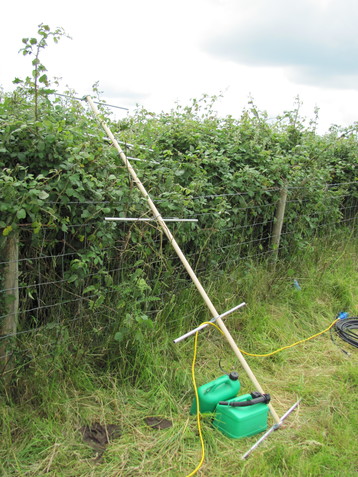 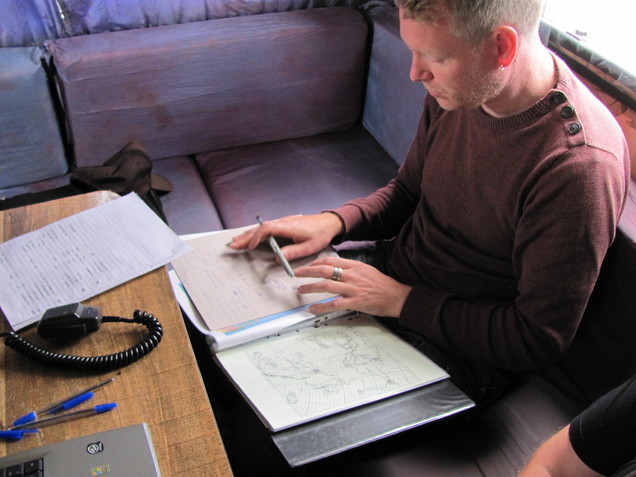 Sunday was similar to Saturday, weather-wise, but with less wind which was a bonus as there were fewer of us to de-rig the station than there was to rig it. Despite the lower numbers we were dismantled within about an hour or an hour and a half from contest end.

Thanks must go, in no particular order, to all of the Club members and friends who took part or assisted in the event: Mark M0SKV as Special Events manager and the builder of the standby 6 element beam, John M6GTT and his XYL for the provision of the operating shack and for working late into the night before the event repairing the 14 element beam and its feeder, Gary 2E0HCC for also working late into the night with John on the beam and feeder, Martin M0JEA for helping with the setup and operation, Fred G7LPP for the loan of the generator, Gary M0RCE for transporting the mast to site and supplying new guy-lines and Henryk M0HTB for helping out with logging on Sunday despite only having returned from Lundy Island where he had been part of the GB2BLE operation the previous evening. 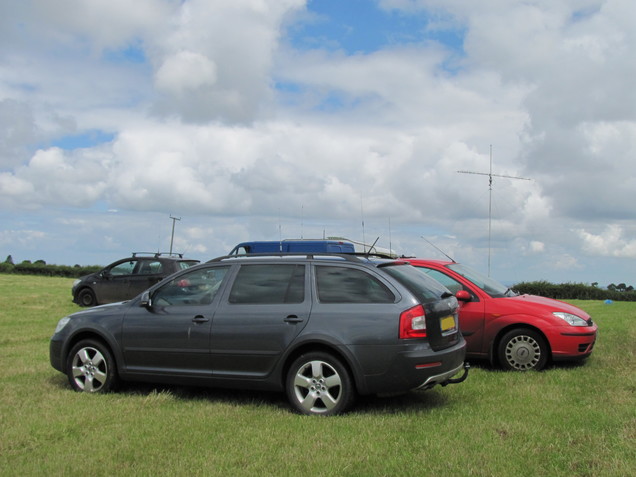 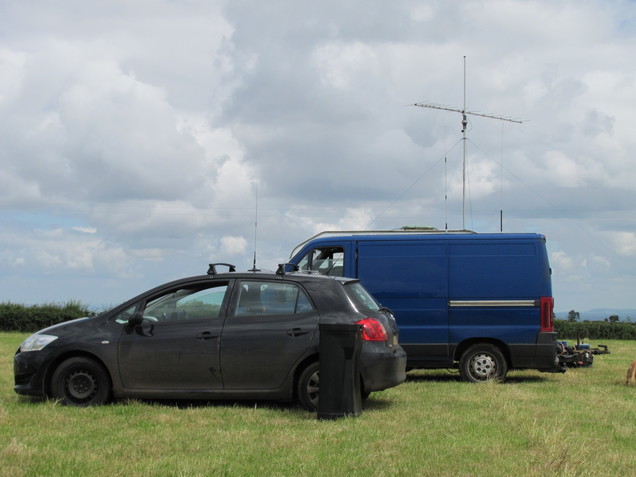 This follows a pattern that we have observed in previous years, over half of the contacts are made in the first 4 hours.

The early rates of 1 station every 3 minutes quickly falls after the first couple of hours and once the third hour is completed the QSO rate doesn't get back into double figures.

There is a secondary peak on Saturday evening but with the exception of that the rest of the operating time was far less productive.

In previous years we have seen a similar tertiary spike in QSOs on Sunday around lunchtime but this failed to materialise this year, although the 11:00 – 12:00 UTC hour on Sunday almost managed the average QSO rate for the contest.

Although the first few hours appear frenetic in terms of numbers of QSO, they are not particularly valuable. Later hours although less productive in terms of numbers of QSOs capture more valuable long distance, even "DX" stations. Notable points in this analysis are hours 10 and 11 on Sunday morning which although only accounting for 5.26% of the number of QSOs are responsible for 11.2% of the points scored.

Tables 3 and 4, below, present a summary of the distances worked. The best DX was F8KID at 681km

Tables 3 and 4, below, present a summary of the distances worked. The best DX was F8KID at 681km 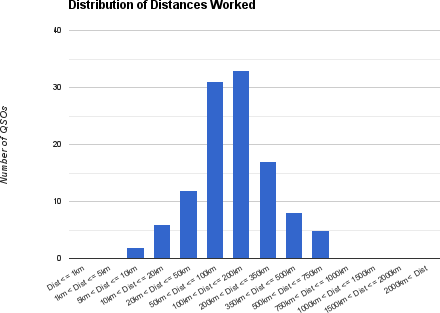 Distances are down on previous years. We did not see any Sporadic E openings into Spain and Portugal that have favoured us before, and German contacts were notably absent from the log this year. The mean is above the median reflecting a slight skew towards longer distance contacts.

Historically European stations normally account for around 10% of the contacts made, so this years result is a little down on previous years. Distances worked were down which precluded contacting any German stations but this is hopefully not an early symptom of BREXIT.

A map showing the geographic distribution of our contacts is shown below. 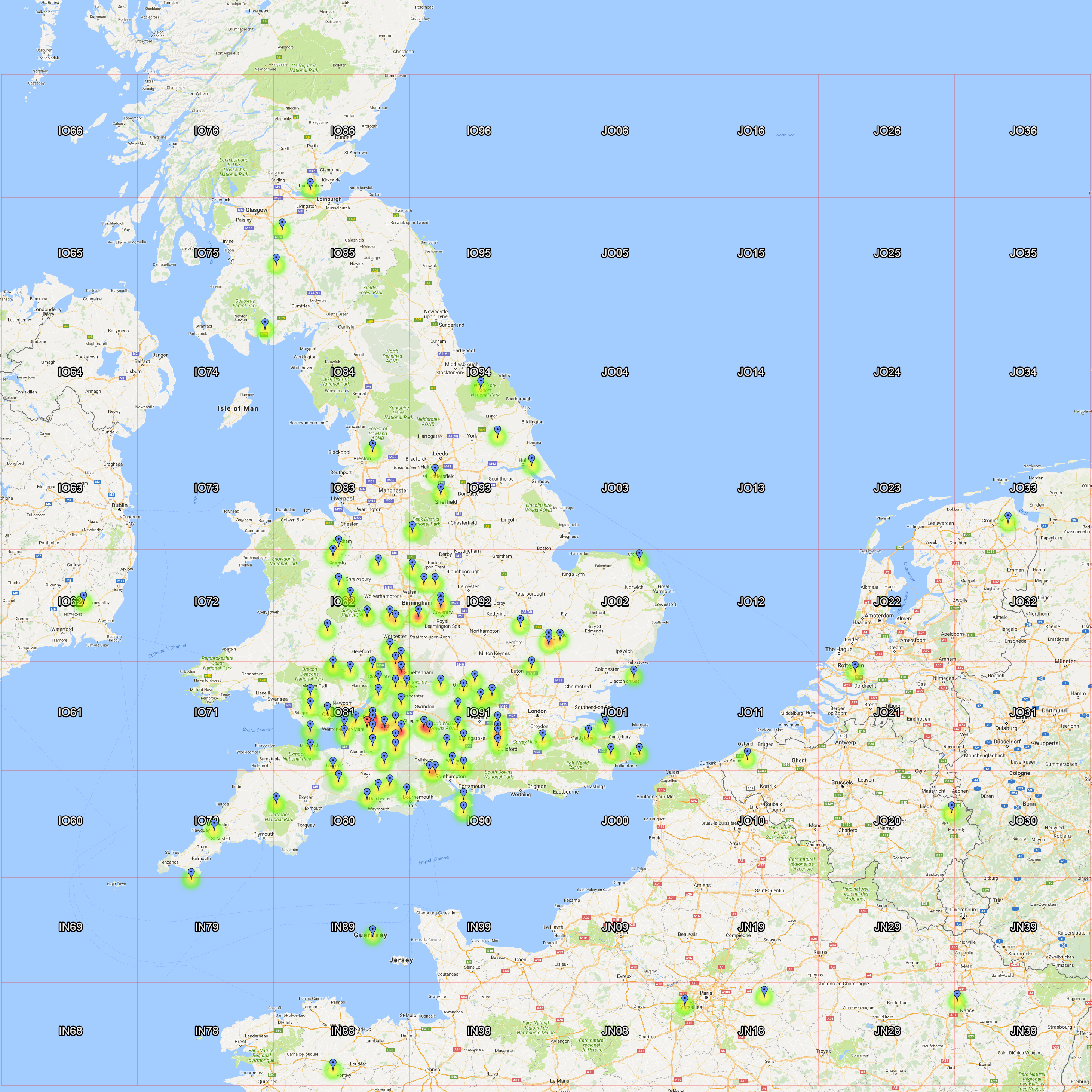 Below is the full log submitted following participation in this years event. If any information is received post submission updates will appear in the "Notes" column.

The closing date for log submission was 10/7/2016. By this time some 104 individuals and organisations had submitted logs in the various classes on 2m. Comparing those who took part with our log reveals:

We worked 5 of these sub 20 QSO operations.

In addition, Fixed Station Sweepers are not permitted to call "CQ", they have to operate in "hunt and pounce" mode responding to CQ or QRZ calls form other participating stations. Our CQ calls struggled to elicit much response and therefore we would have missed out on these stations as a result.

The overall results, being an amalgamation of the performance on all bands, never favour us with our single band entry. We have finished 7th in this table which is a similar performance to last year. Of more interest or note is that we are the second highest single band entry and the margin between us and the highest placed single band entry Fareham and District ARC who finished 6th, 1 place above us, is quite small.

The performance within the single band we entered is more revealing. Here we finished 5th overall

Warrington CGs position at the top of the table is unassailable. 232 confirmed QSOs is over twice the next highest number of contacts (Worksop ARS with 105 QSOs followed by ourselves with 104). On top of that their points score of 59,123 is over twice their nearest competitor (Lagan Valley ARS with 21,354).

Warrington do have a very good setup, reportedly they were operating a 17 element beam on 144MHz 10m above ground on a site that was 465m above sea level.

Loch Fyne Kippers 4th place is impressive, more so as they managed this with only 43 confirmed QSOs giving them an average distance per QSO of just under 400km some 21% better than the next highest average distance per QSO and the best in class. This was achieved with a reasonably modest setup making the achievement even more impressive as they operated a 10 element beam 8m above the ground from a site only 37m above sea level.

Our performance can be summarised as:

Our errors are more or less random both in type and in distribution. A cluster of errors in a short space of time could indicate an individual operator requiring training and development. A repeated error could indicate a systematic fault. As it is it would appear that most of our errors fall into the "oops" category simply mis-heard or mis-typed, although the contact with G5TO at 20:18 on Saturday evening was something of a disaster!

Despite this, the importance of careful and accurate logging cannot be overemphasised. Had we logged F6KRK/P at 11:51 on Sunday and the aforementioned G5TO at 20:18 on the Saturday correctly we would have picked up an additional 686 points, enough to jump us over Loch Fyne Kippers and into 4th place.

If, in addition to F6KRK/P and G5TO, we had also correctly logged G3PJP at 19:22 on the Saturday then we would have picked up a further 203 points giving us an additional 889 points, enough to take us ahead of Fareham and District ARC into third place equalling our best recent result and improving our overall position in the combined table by 1 place as well.