This years VHF Field Day occurred in the midst of one of the most prolonged hot and dry spells the country has seen. We were not, therefore, overly concerned about adverse conditions but should, perhaps, have been a little more cognisant of the suns path through the day!

We had checked that our regular spot would be available to us, however the night before we were due to deploy our host asked us to move into the next door field. This was because the prolonged hot and dry weather had drastically impacted on the availability of good grazing for the cattle and our regular field was one of the few locations that retained some reasonable grazing.

The move into the adjacent field was not a problem, even the access point was the same as we regularly used so everyone (well almost everyone) knew where to find us.

We planned to start the set-up around 11:00 as we were reasonably confident about the equipment, its setup and operation and the location and had pared our operation down to not quite the pure essentials but to something that had little or no excess or superfluous equipment.

Around 09:00 Andy G7KNA met up with the owner of the horsebox that was to be our base of operations for the weekend. This wagon was in better condition than it had been the previous year as the kitchen had been refitted following repairs to address internal water damage that had rotted the floor out before the current owner bought the vehicle.

The wagon was on site by 10:00 and the owner transferred back home allowing Andy G7KNA to get back to site just before the agreed 11:00 rendez-vous and was soon joined by (in no particular order) Mark M0SKV, Stephen (Foundation trainee), Julian M0JCE, Joe 2E0EIC, Paul 2E0GHT and Fred G7LPP although the positioning of the vehicle was to prove to be one of the few significant errors of the weekend. 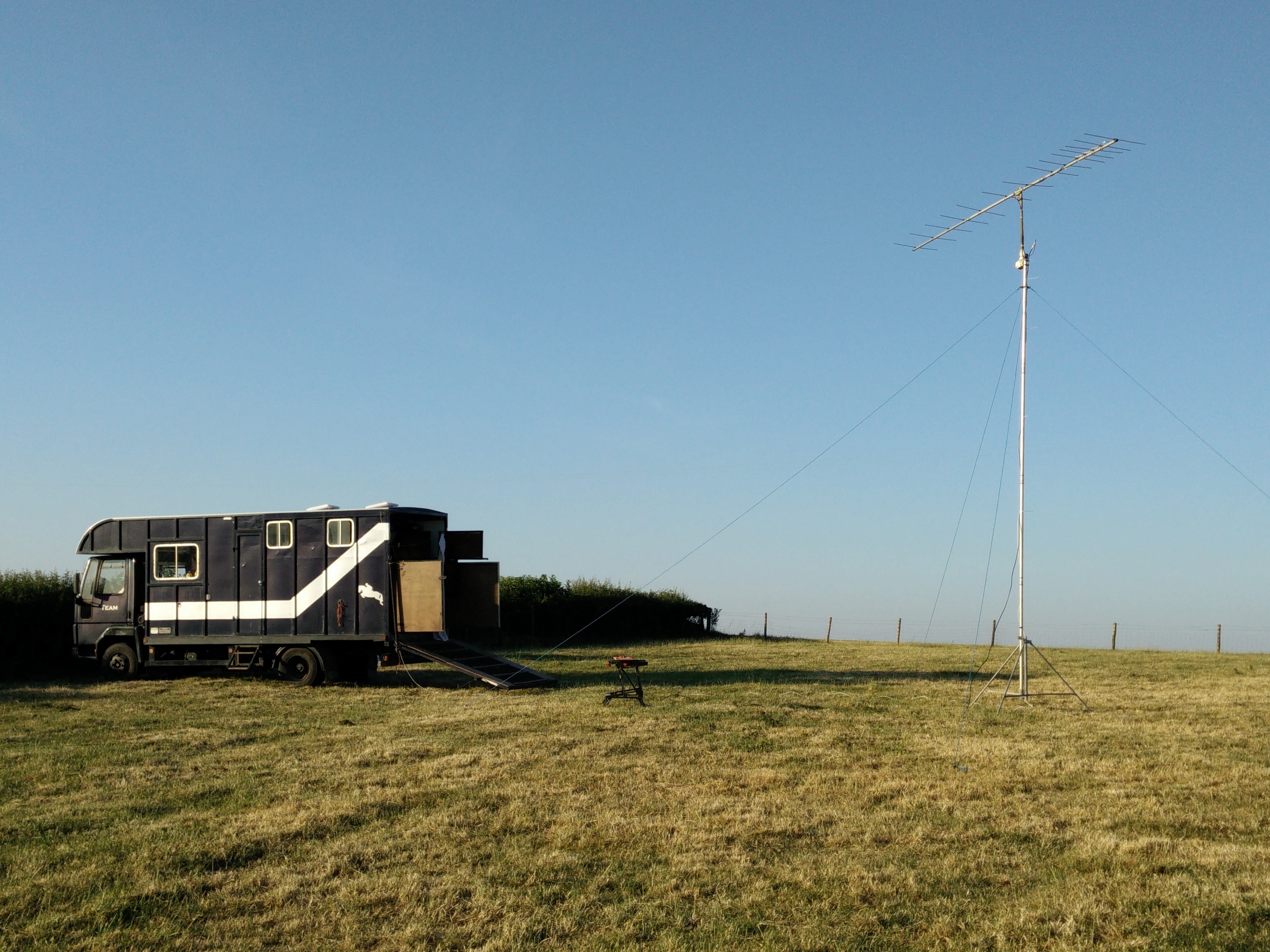 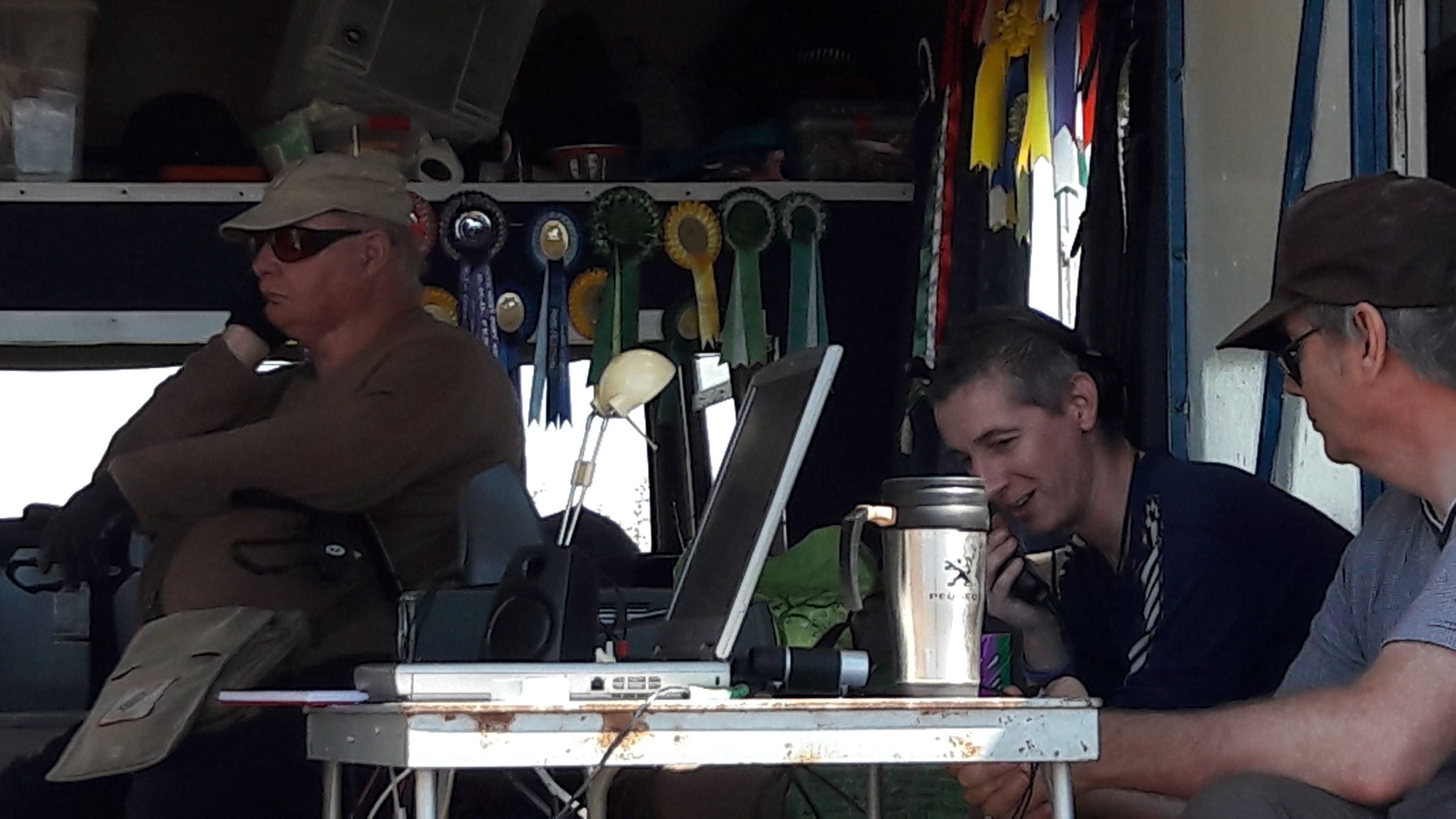 The setup went more or less to plan and we were ready well before the 14:00 UTC start time. The period between setup being completed and the start of the contest was filled with consumption of hot dogs from the newly refurbished kitchen deftly managed by Paul 2E0GHT who put in sterling service over both days as our on site Catering Manager and with some tuning around and informal contact with other stations that were also in the process of setting up and testing their stations. We were surprised how few stations were in operation an hour or so before contest start when CQ call after call went unanswered. In fact we had to resort to holding a QSO with ourselves passing the microphone between two of us to generate some interest and activity but once we made contact other stations quickly came out of the woodwork. 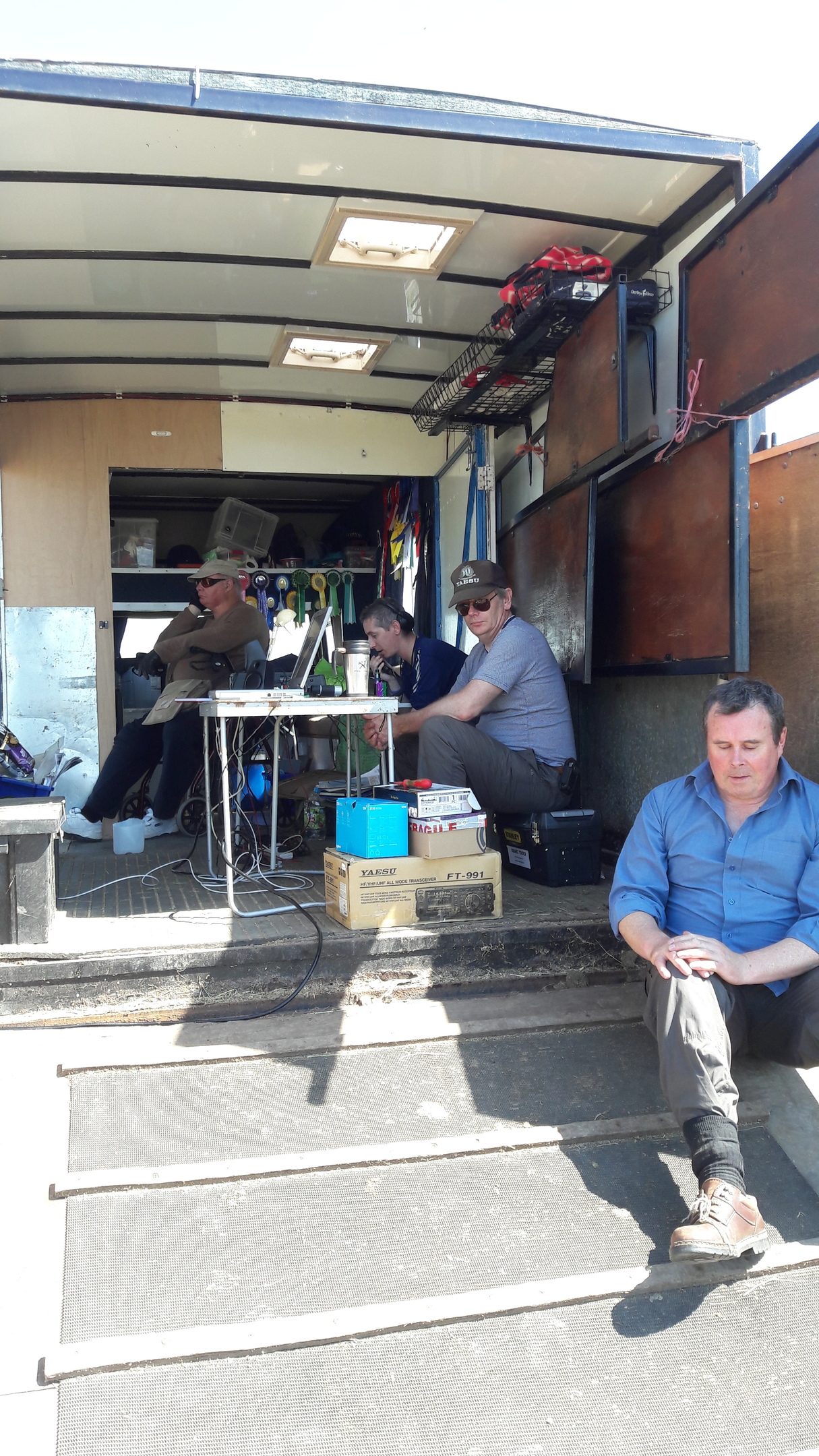 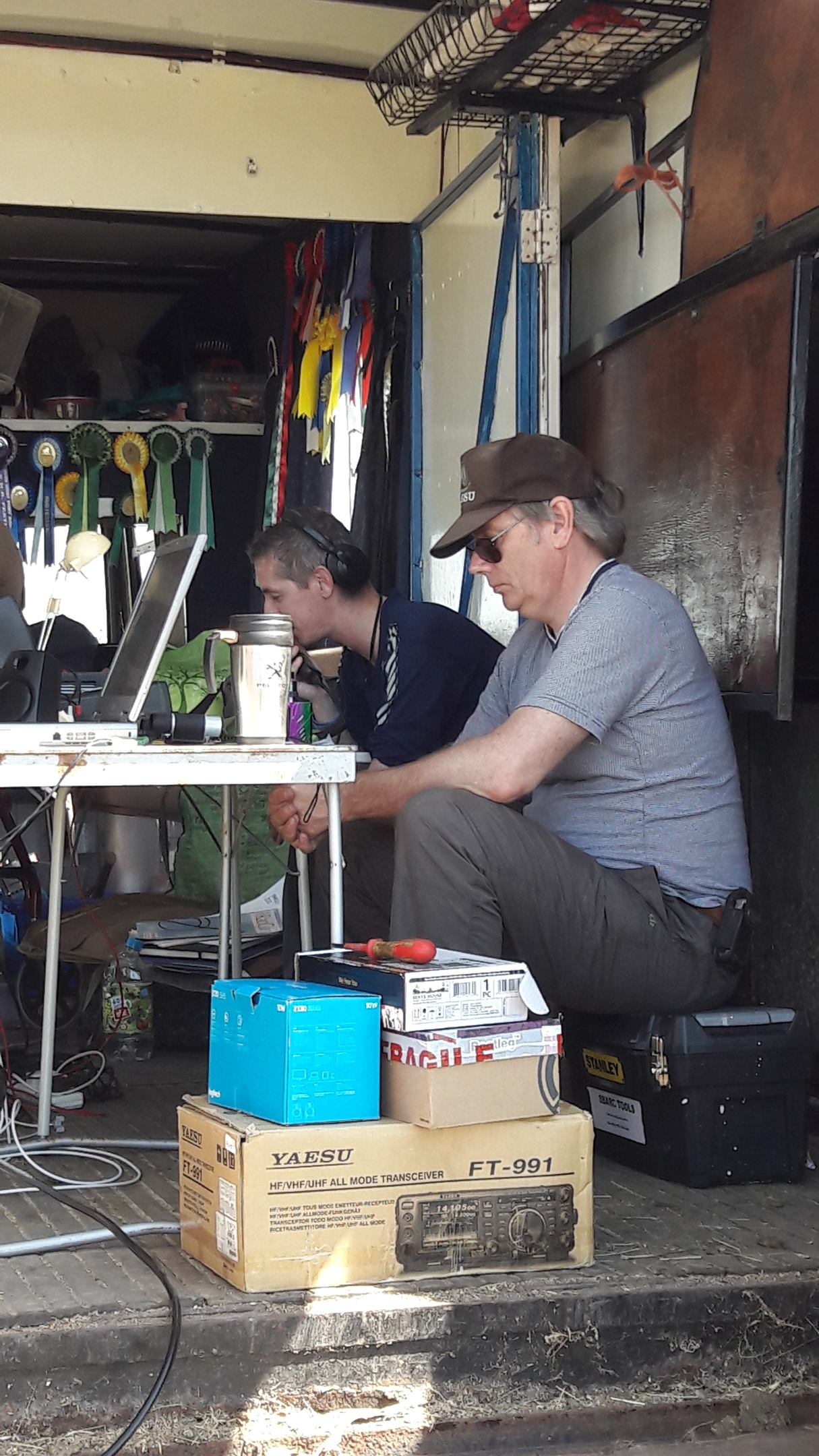 The start of the contest seemed to be a little less frenetic than in previous years. It’s not really a scientific comparison but our QSO rate in the first couple of hours was only around 17 – 18 QSO per hour compared to 25 – 26 QSO per hour last year. We are reliably informed that this year there was a small sporting event taking place at 15:00 when England were playing Sweden in something called the “World Cup” so perhaps those who came late to the contest can be forgiven especially as England won. We knew the result because, we are slightly ashamed to admit, we deployed a small portable TV in the living area of the horsebox to keep us abreast of the score-line. We don’t anticipate this problem recurring for another 4 years! 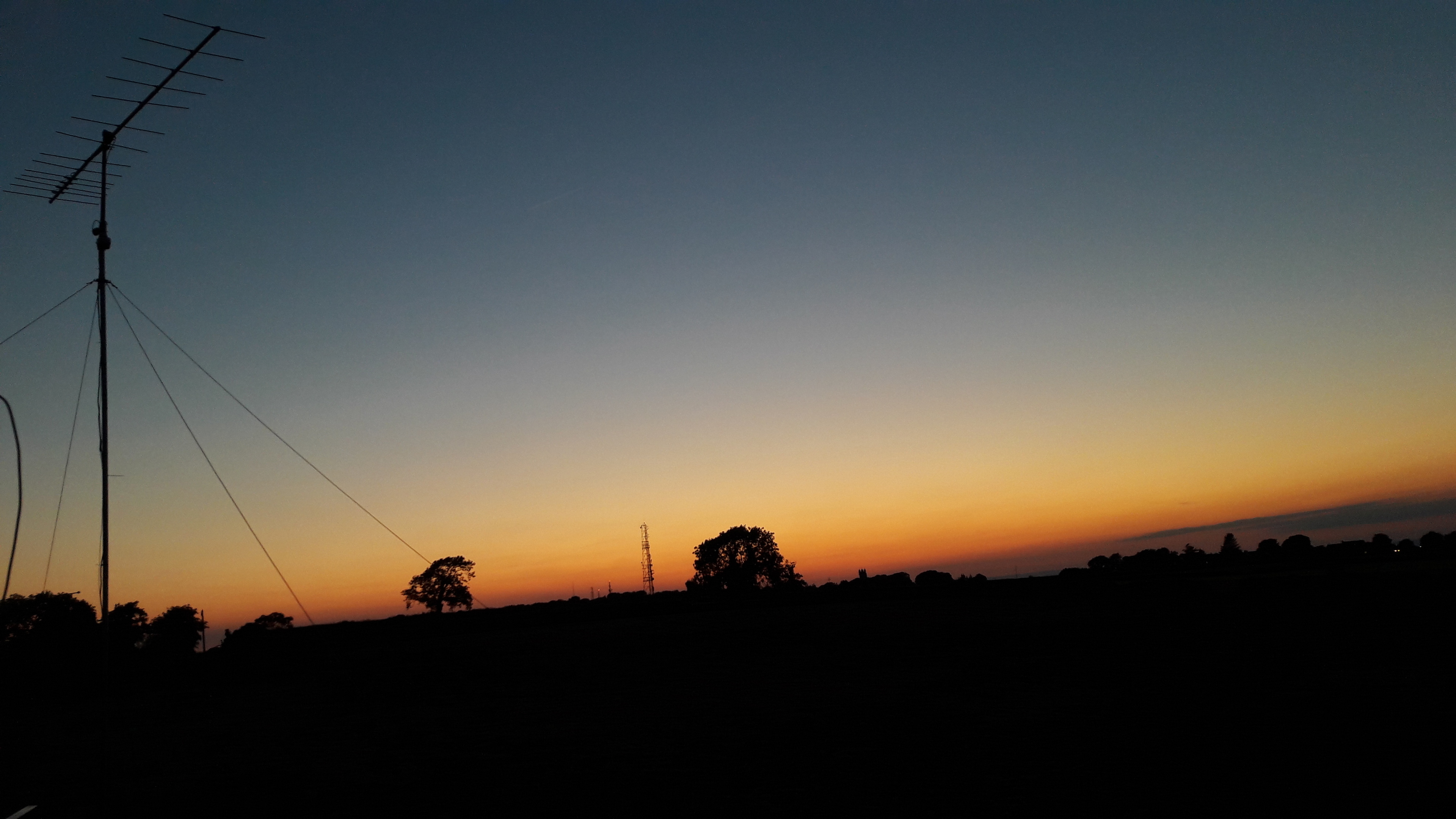 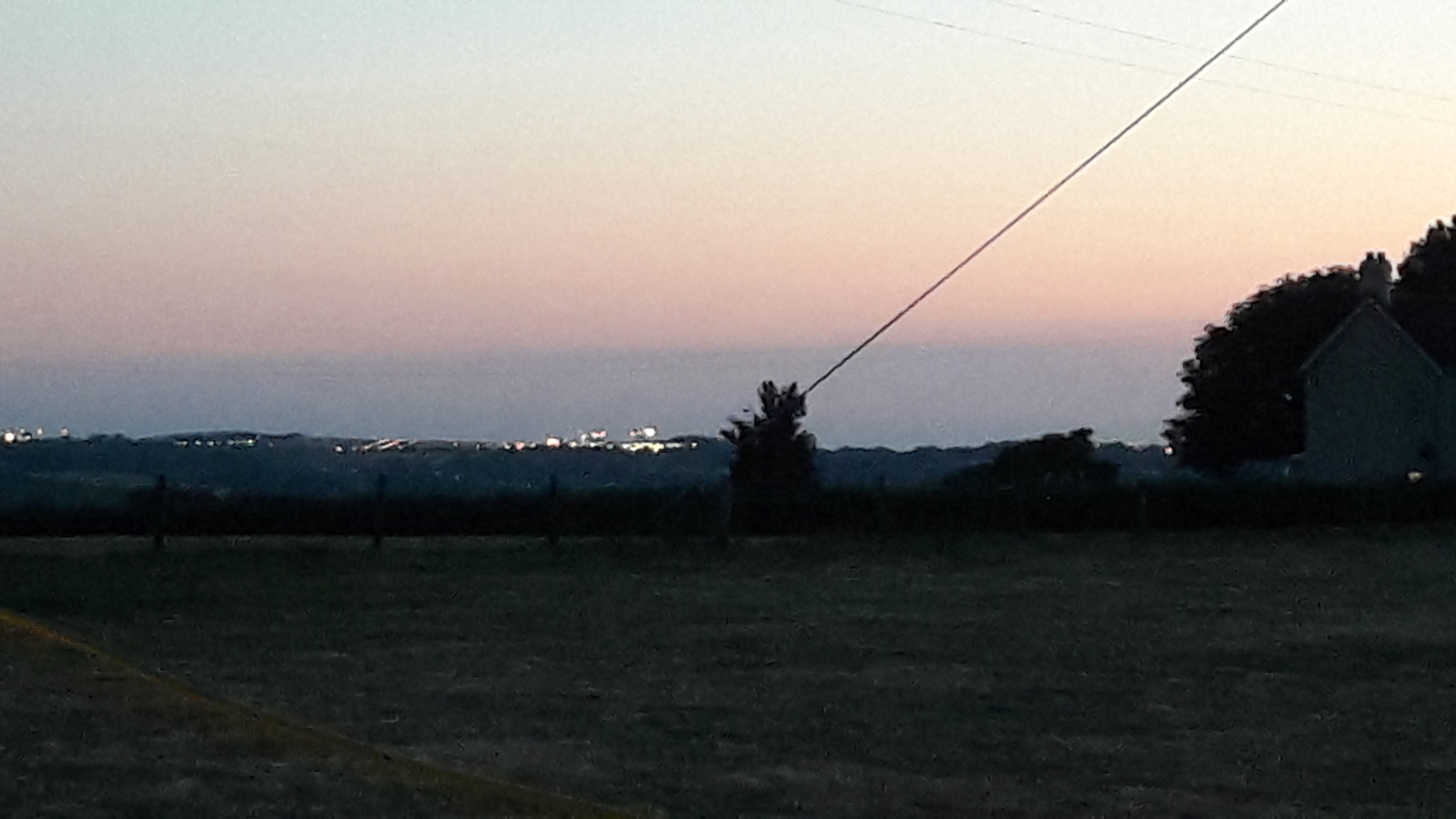 As the day wore on we became aware of a tactical error in our site arrangement. The horsebox was a good vehicle for this operation and despite being a large metal box (with ply lining to the living accommodation) did not get overly hot or bright thanks to the large tailgate that was left open throughout the weekend allowing a good air circulation. However the wagon was parked facing East South-East and as the day wore on the sun moved round and was finally shining directly into the rear of the wagon causing unbalanced sun tans for the operators and loggers reminiscent of scenes from “Close Encounters of the Third Kind” and some less comfortable conditions. The problem was resolved when a makeshift curtain was added to the rear opening but next year we’ll face south which should completely avoid this problem. 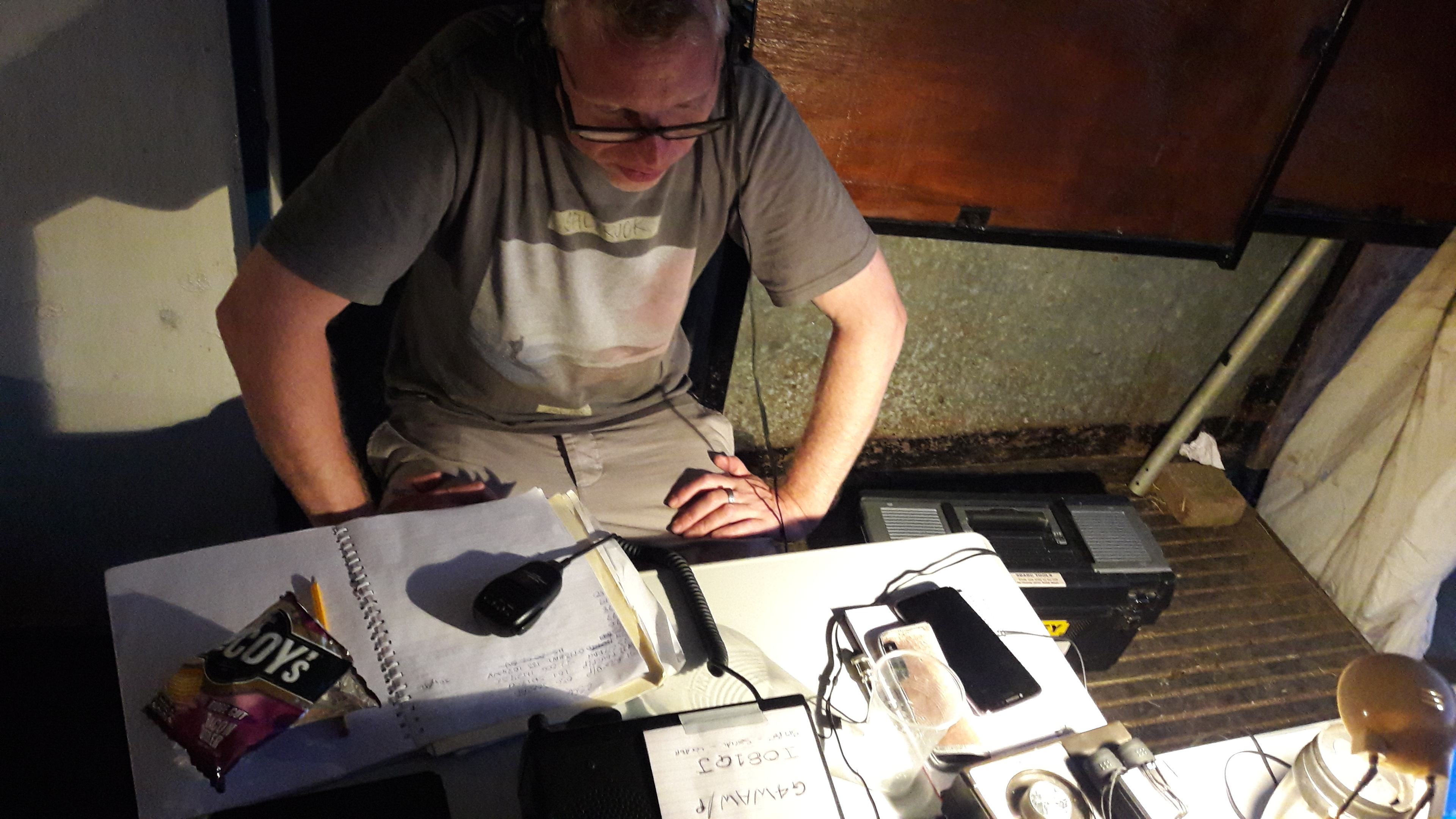 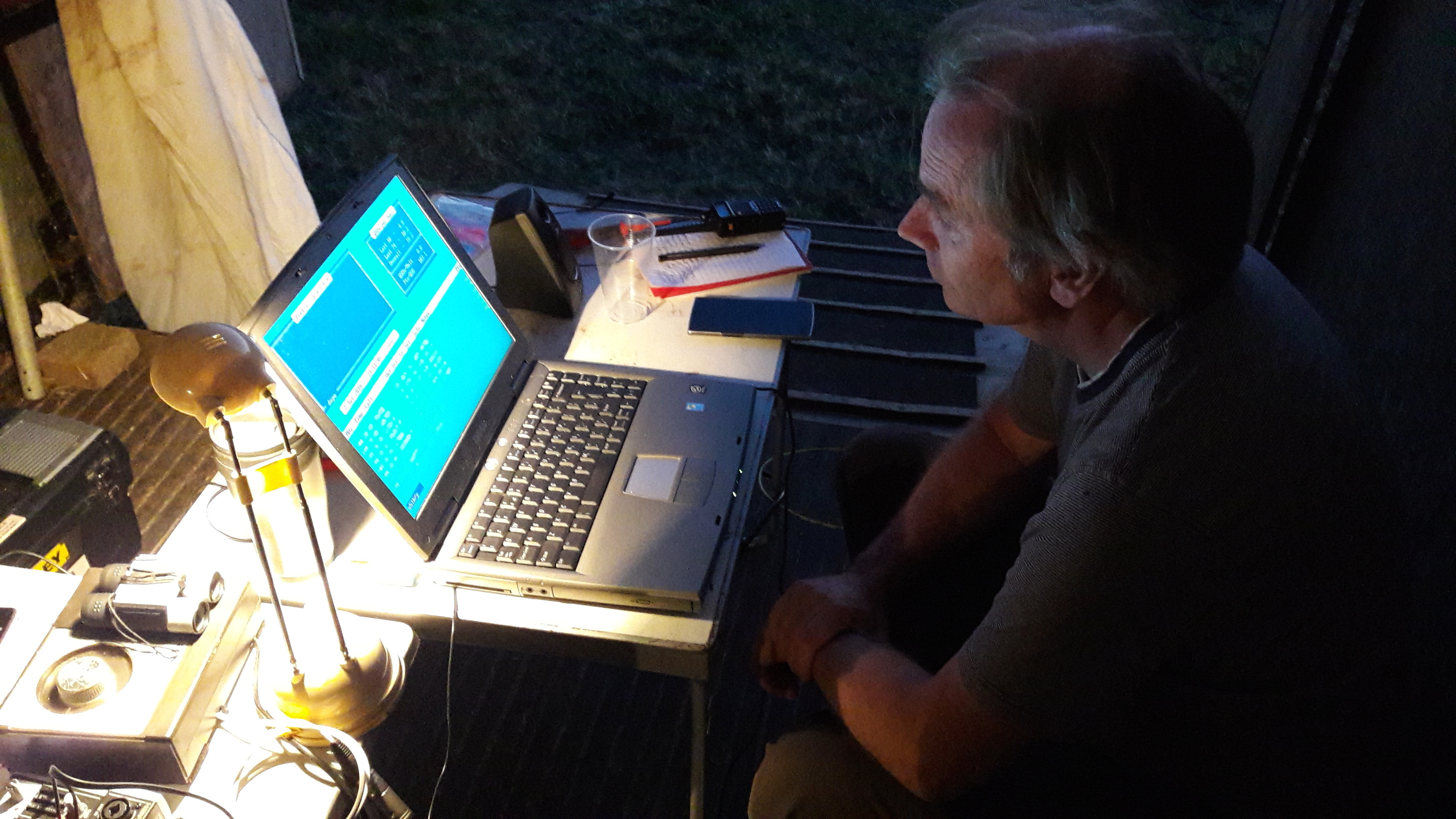 We were quickly off the blocks when the contest started with a short contact into Wales followed by a series of English contacts. We were north of the border inside 30 minutes and also bagged a Channel Island contact in to Guernsey giving us a good start on our recurring ambition of collecting all of the RSLs in a single event. Obviously we needed Northern Ireland, the Isle of Man and Jersey at this point to complete the set but to be half way there at less than 30 minutes into the contest was a very good start. 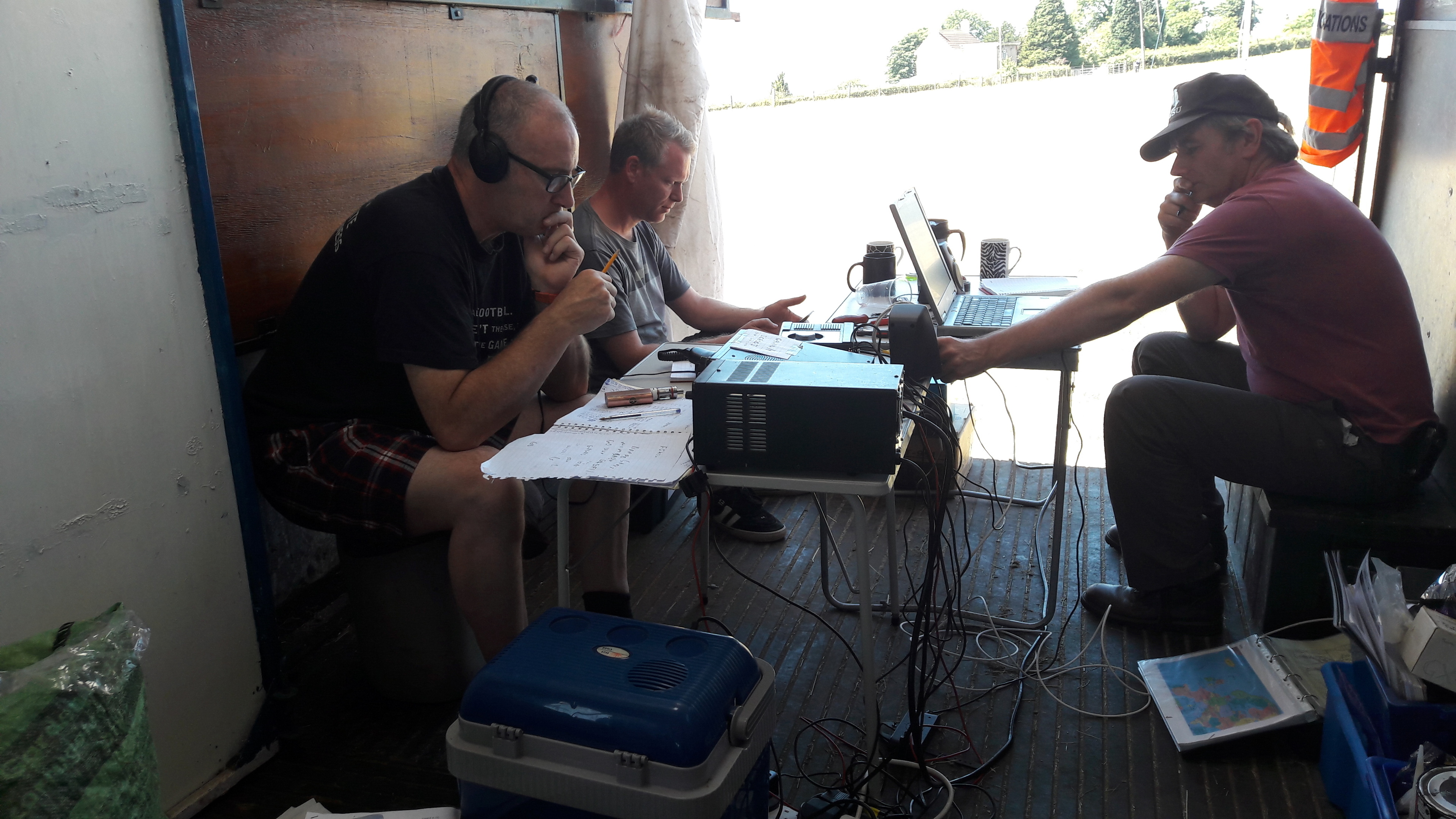 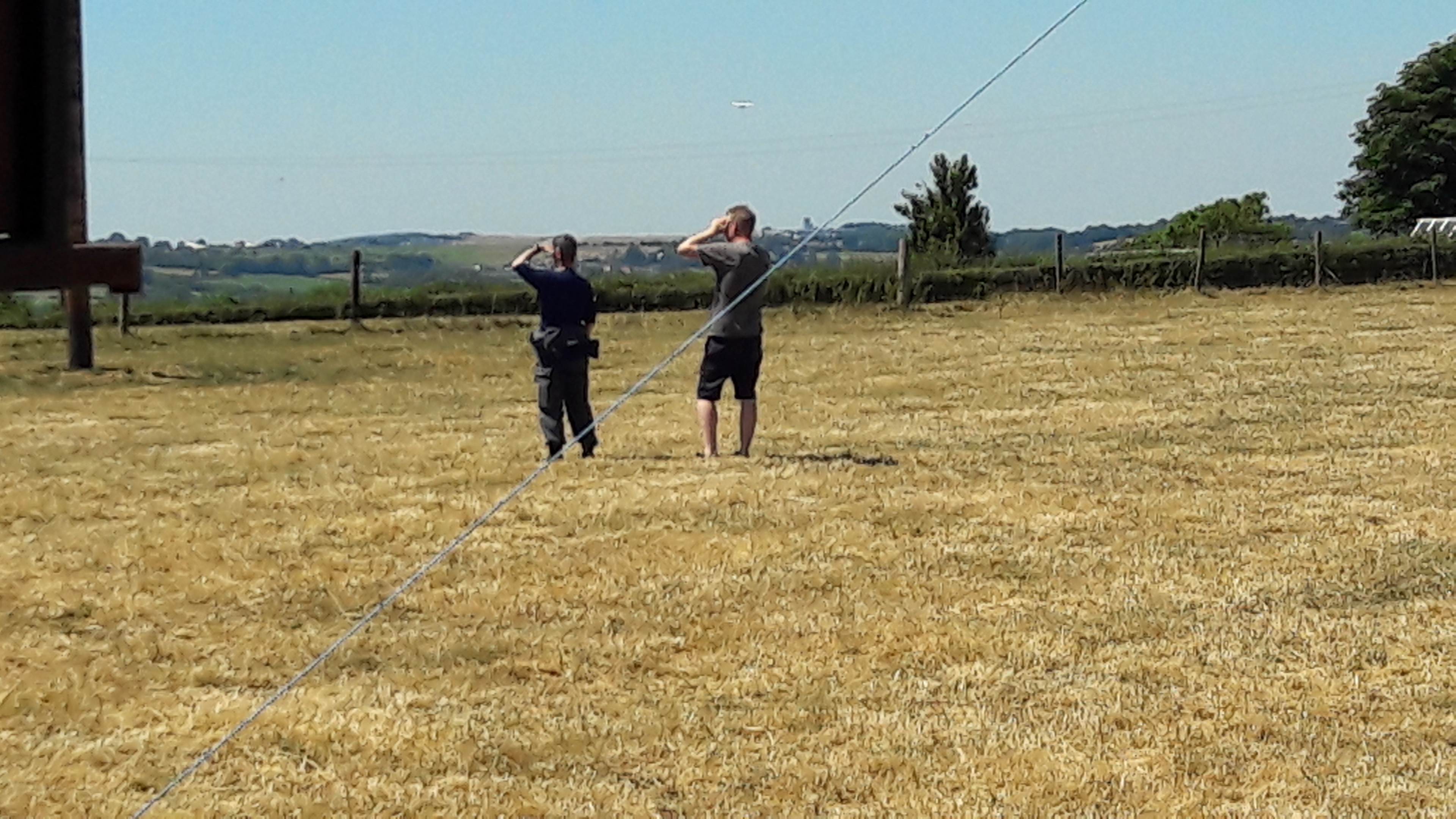 We secured Northern Ireland just before 19:00 UTC but had to wait until the Sunday to work the Isle of Man. Sadly we failed to make any contacts into Jersey so once again we will have to wait for that clean sweep of RSLs. Contacts into the South West seemed to be more readily available than in previous years, when we worked a station on The Lizard a Club member who was on holiday in Cornwall could hear both sides of the QSO but was unable to make a direct contact with us. 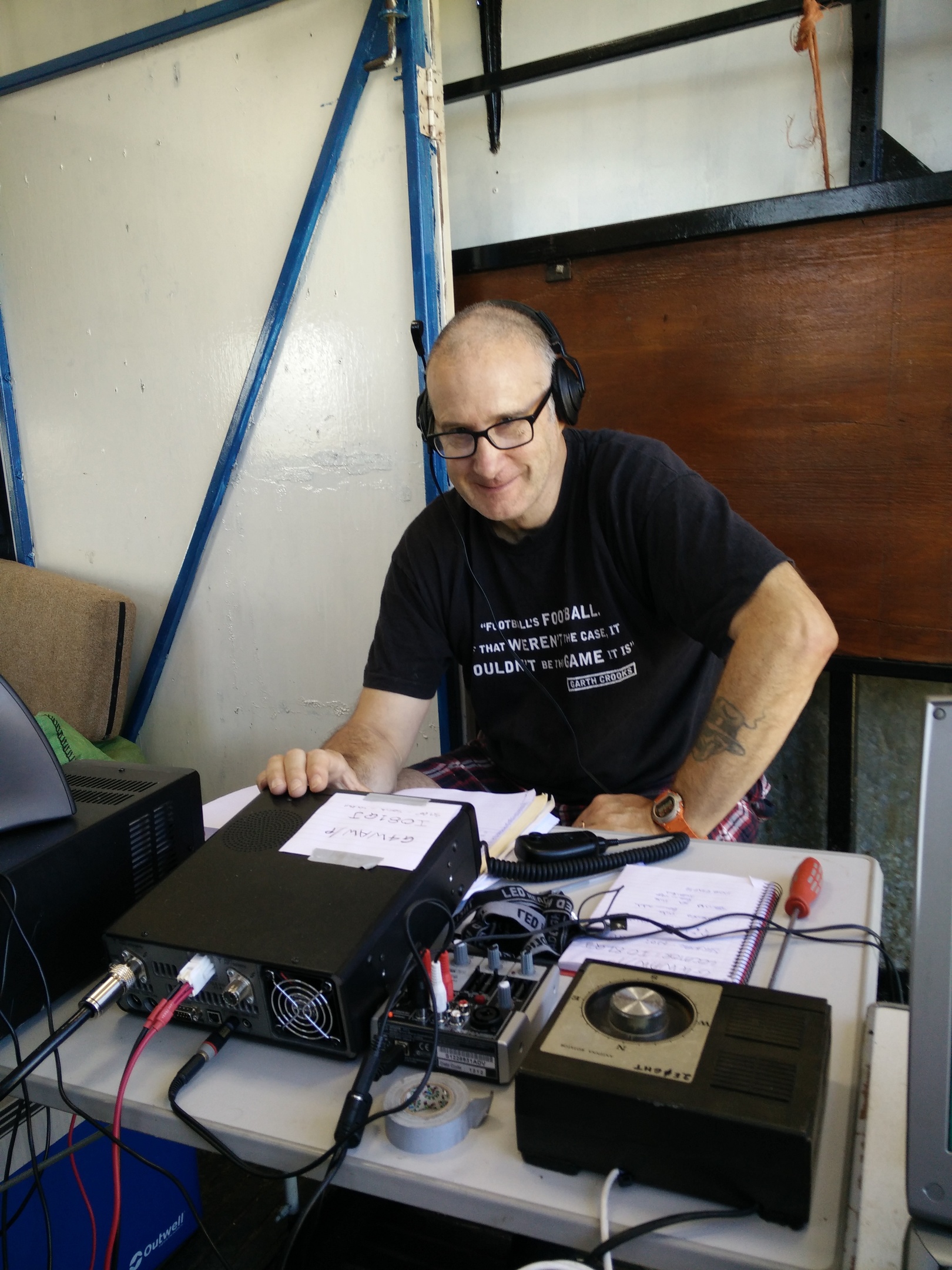 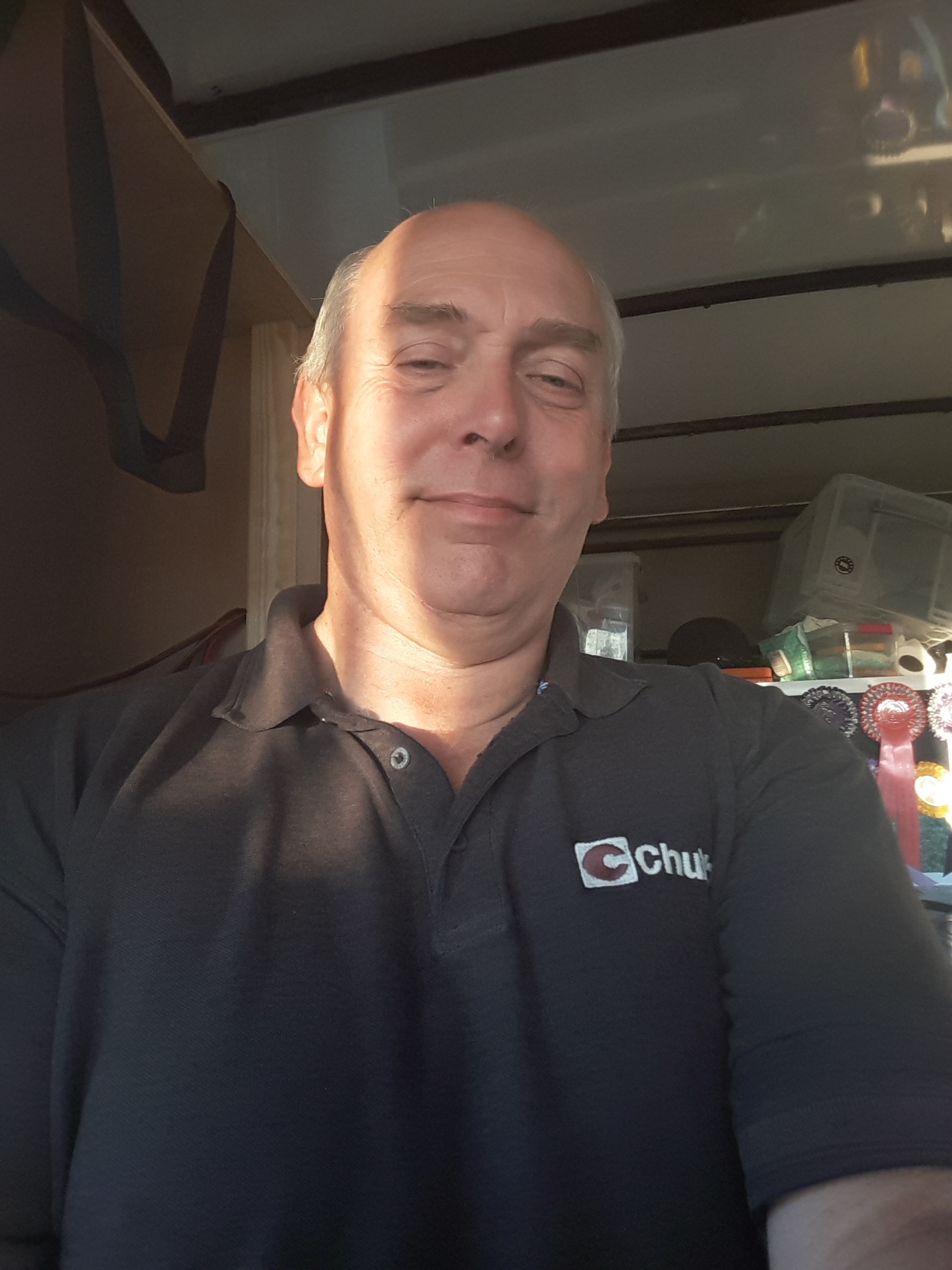 The was a small “blip” in the hit rate on Saturday evening between 18:00 UTC – 19:00 UTC which is not apparent every year but has been observed before.

Sunday started slower than usual although this might be because our rotator had slipped overnight and was not pointing in the direction the controller said it was! There was reasonable activity all through Sunday morning with the usual flurry of contacts in the closing hour of the contest.

The late shift on Saturday had a hard time scaring up some contacts calling CQ although stations on the east coast were reporting significant activity in Europe during these late hours. This clearly demonstrates the benefit of being situated on the east of the country with easy access to continental Europe as well as a reasonable spread of land to the west as well.

Tables 3 and 4, below, present a summary of the distances worked. The best DX was DA0FF at 887km 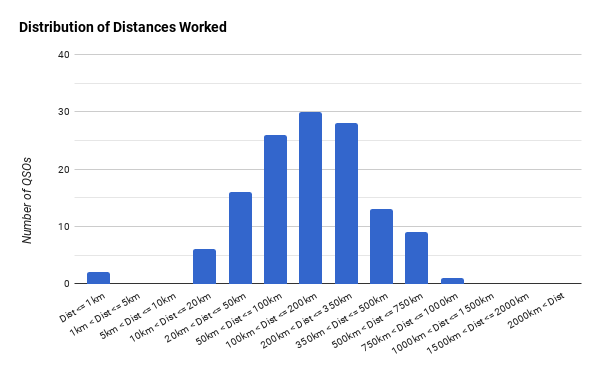 The mean is above the median indicating a bias towards longer distance QSOs which would be expected in a contest where long distances are rewarded. The most common distance worked was 47km which was the result of 3 contacts into the same grid square!

If an effective reliable operating range of 350km is assumed then from our location we could reliably expect to be able to work to the French coast at Calais and Brest, the east coast of Eire and north to the Lake District. There is significant unpopulated areas of ocean off the North Devon, and North Cornish coasts within our effective range reducing the potential number of target stations. By contrast a station on the east coast, and we worked several, is blessed with much more populated land mass within 350km including most of southern England out to mid-Wales and into continental Europe with the Netherlands, parts of Germany, Belgium, Luxembourg and a large tract of France being easily accessible.

We almost managed a clean sweep of the United Kingdom Regional Secondary Locators, something that has not been achieved to date on any contest or Special Event operation that we have participated in. Missing stations in Jersey was the only reason that we failed to collect all RSLs.

16% European contacts is on a par with 2017 and higher than we have achieved in many previous years. 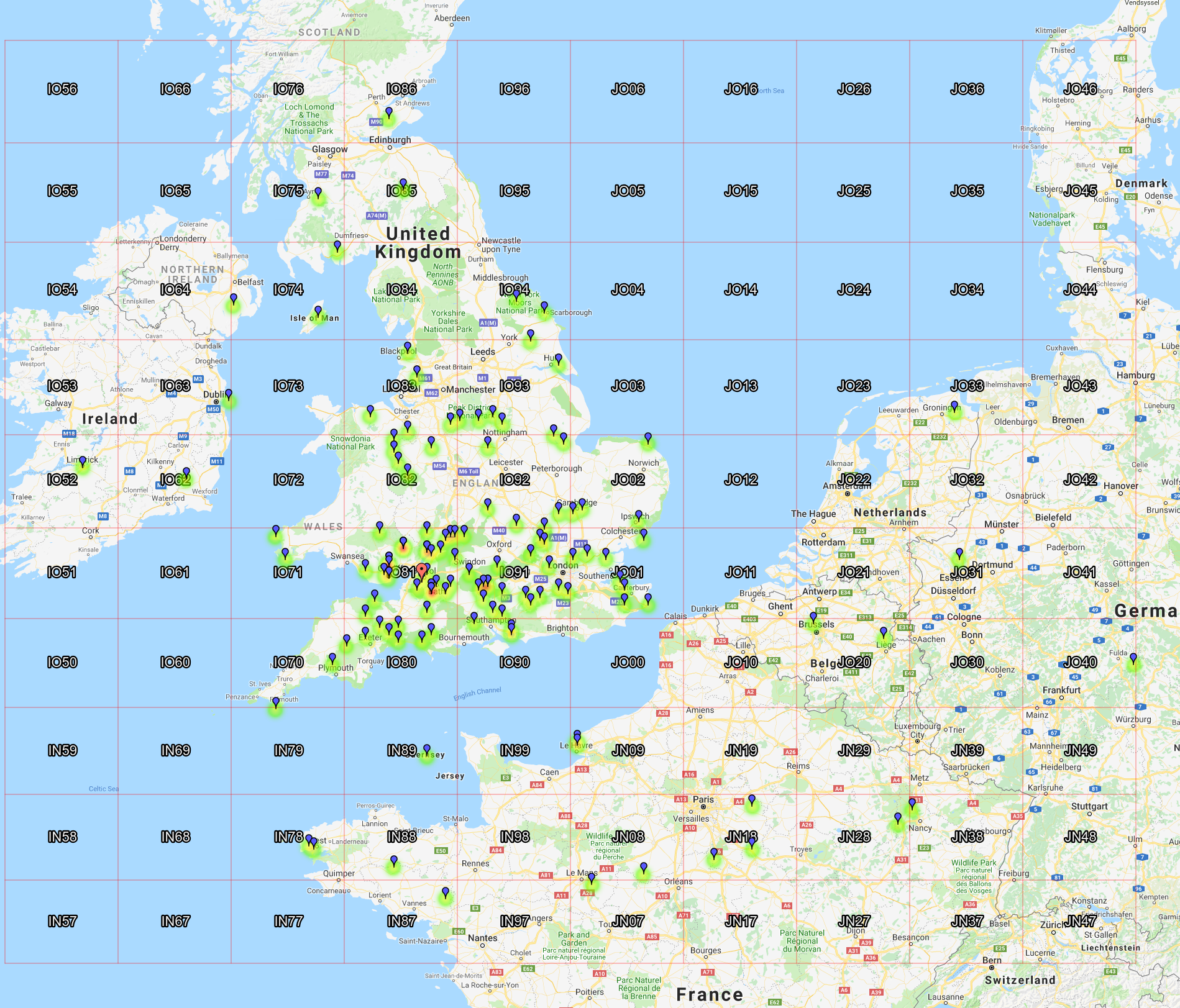 Below is the full log submitted following participation in this years event. If any information is received post submission updates will appear in the “Notes” column.

We made 10 errors according to the adjudication process, an error rate of 7.63% compared to an average error rate for the contest as a whole of 5.72%. Our error rate is higher than 2017, and whilst this is less than desirable the following points should be noted:

The closing date for log submission was 15/07/2018. By this time some 88 individuals and organisations had submitted logs in the various classes on 2m. Comparing those who took part with our log reveals:

We worked 1 of these sub 10 QSO operations.

Of more interest is that there was no Low Power entry in the 4m class. This means that tactically had we mounted a 4m Low Power entry alongside our normal 2m Low power entry we wold automatically have been the highest scoring entry in class and therefore even 1 confirmed QSO would have netted us 1000 normalised points making our total 1335 moving us into second place overall! That’s the madness of normalised scores for you.

Our Best DX (by Mark M0SKV) into Germany is a good result and on a par with Warrington Contest Groups best performance.

In terms of average points per QSO Warrington managed nearly 300km/QSO well above anyone else in the class and part of the reason their position at the top of the table remains secure year on year. The next 5 entries are all in the range 209km – 222km and 3rd – 6th place being covered by a mere 5km.