It had been hoped that this page could be started with the strap line "We're back!". Sadly it is not thought that at this year will be that spectacular in terms of performance. Although the whole event went far more smoothly than last year we struggled to work a significant number of stations and felt that the conditions were fairly flat and that there was not as much activity as there had been in previous years.

We spent a lot of time calling "CQ" but had very few responses. This might have led us to believe that we had an output problem, but when we switched to "search and pounce" anything we could hear we could work even into Europe so there couldn't be that much wrong with our output. 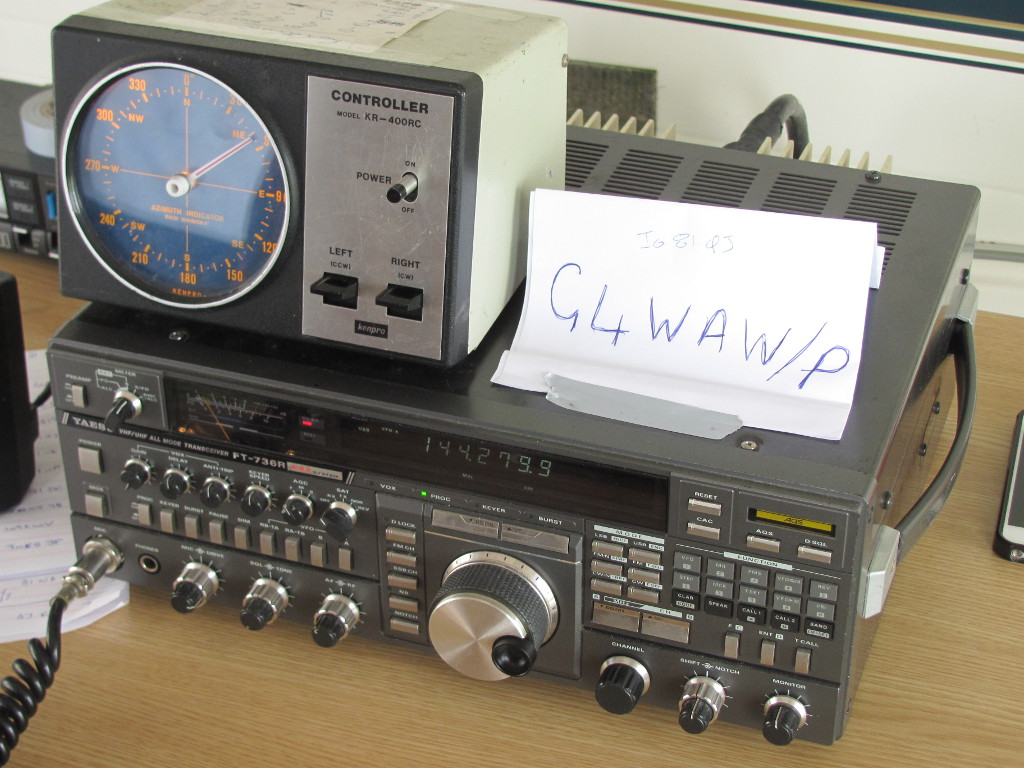 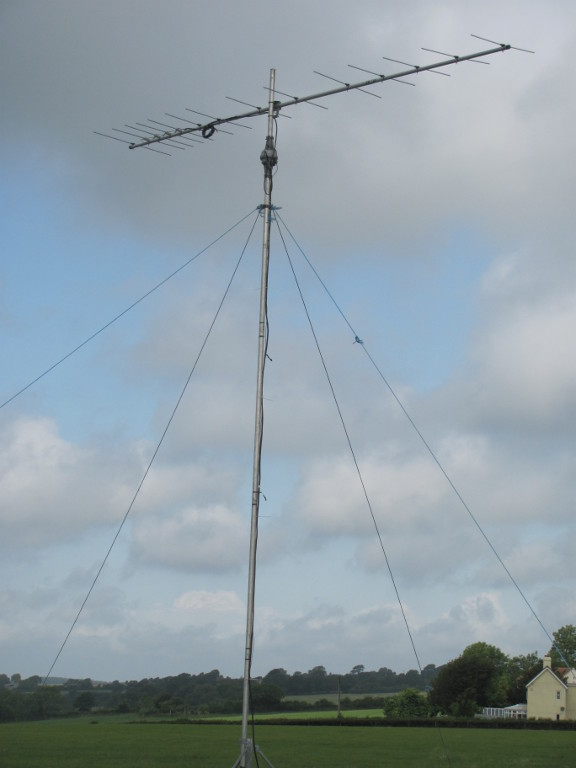 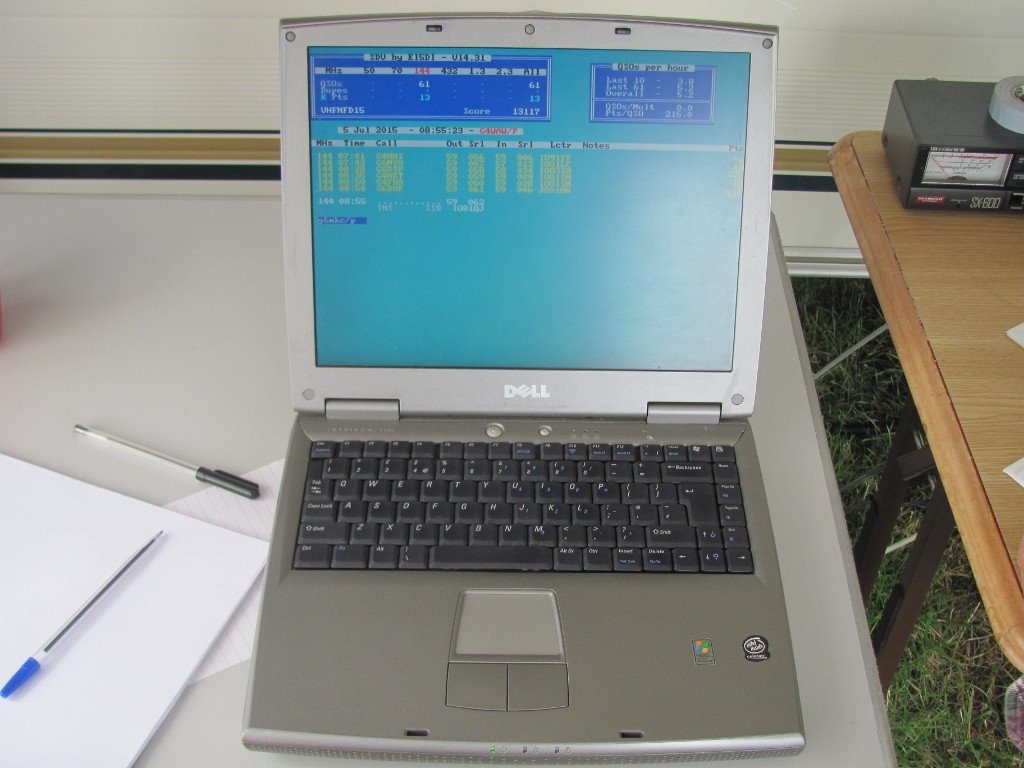 Setting up was a lot smoother than last year. Most of those involved in the Saturday operation were on site as agreed between 10:00 – 10:30 BST. There was a bit of a hold up on the A38 that caused the caravan and awning that would form the base of operations to be a little later than planned. Apparently someone had crashed a Range Rover and caravan on the A38 which blocked the road and forced our own caravan into a detour. Never the less everything arrived on site in good time, and following last years mishaps it was nice to find that all of the equipment had arrived and there were no omissions. 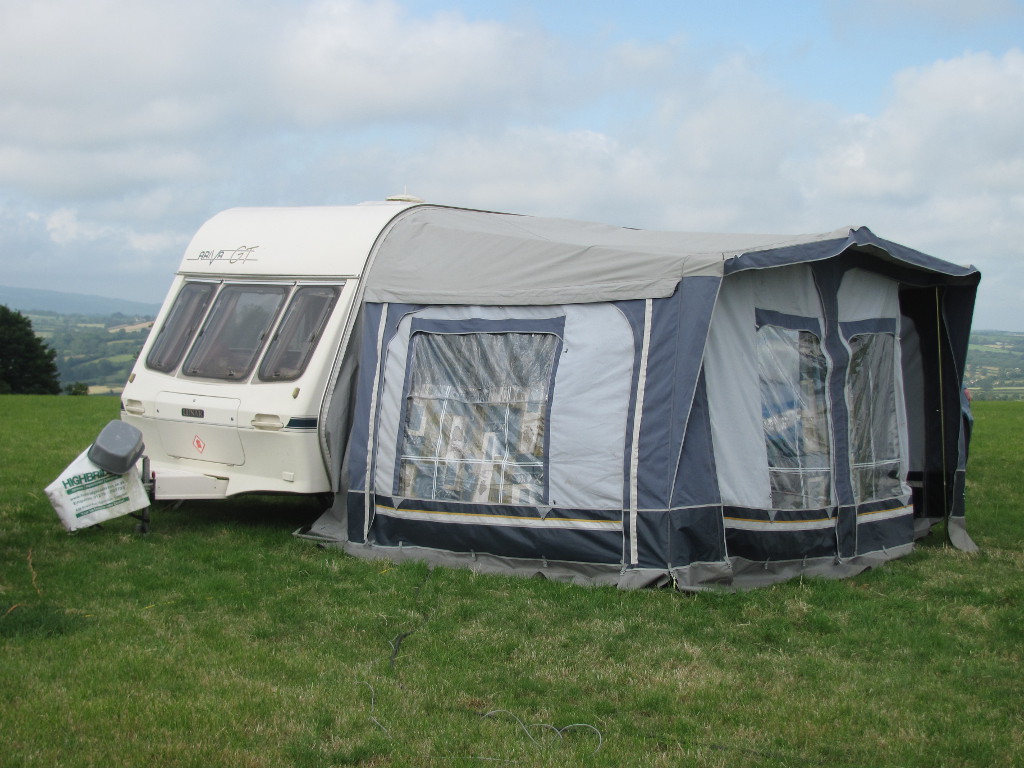 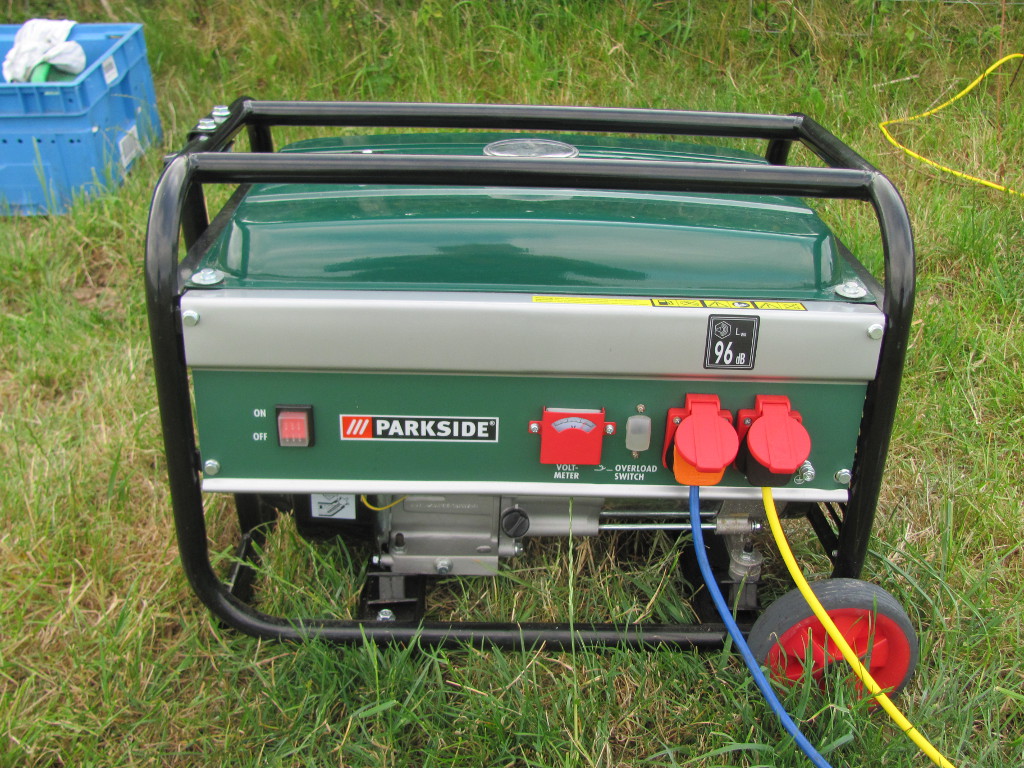 The SWR on the antenna was a little higher than we would have liked or expected but it was certainly operable. It is likely that we will have to do a bit of care and maintenance on the antenna in the coming months. 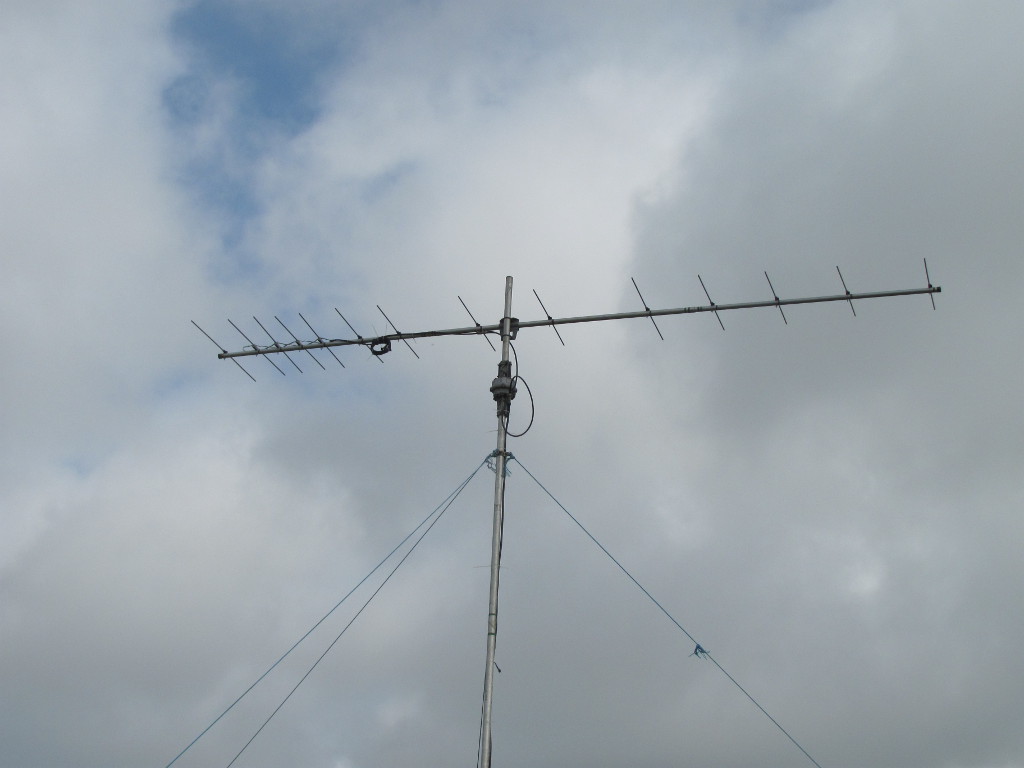 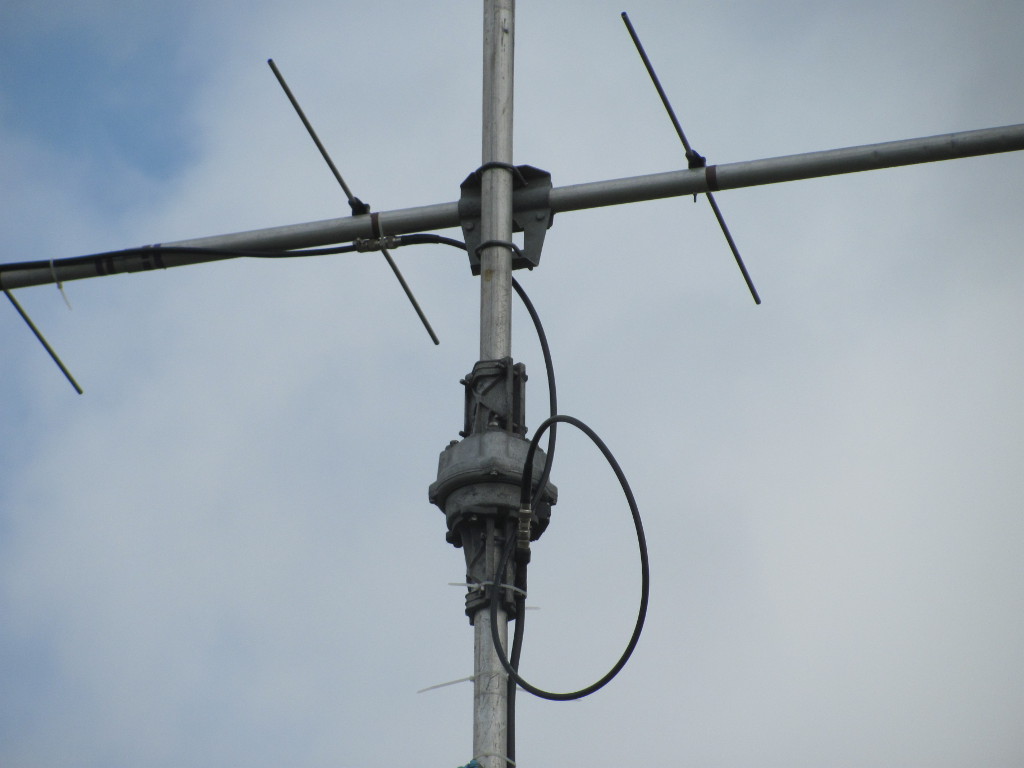 Saturdays weather was good throughout the day although, as always in this location, there was a constant strong breeze that kept effective temperatures down. Sunday was a little less kind as the forecast rain arrived around midday and continued more on than off through the afternoon resulting in a wet dismantling session 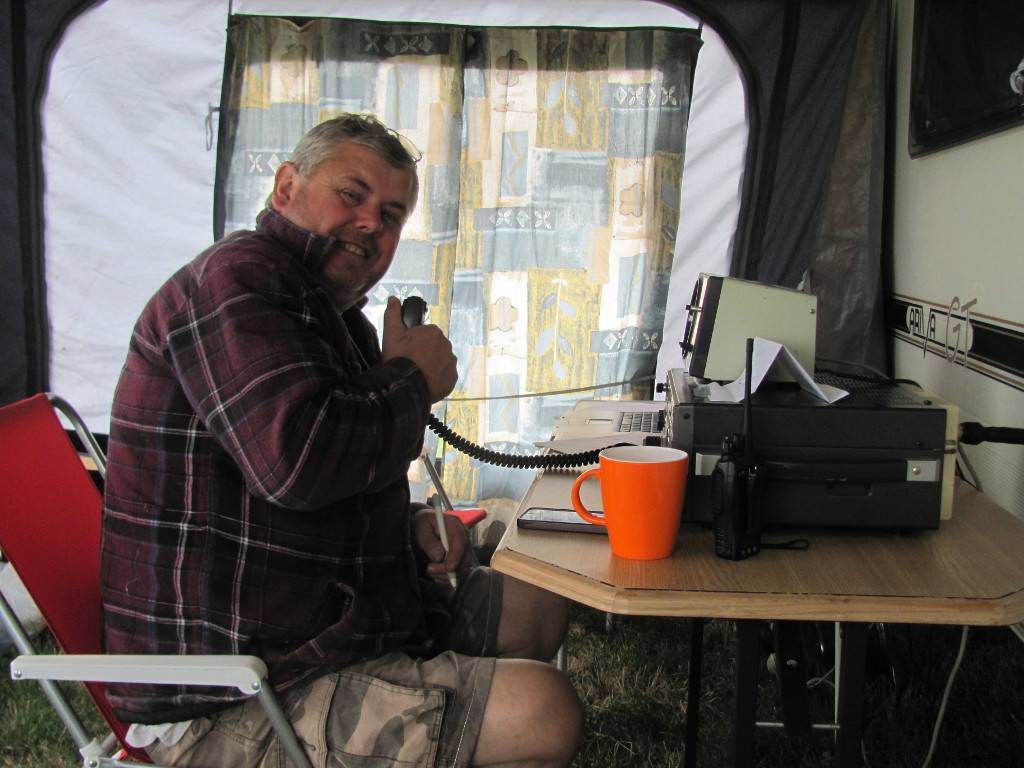 The table demonstrates how slow the event was overall for us. There was the usual flurry of contacts in the first 2 hours which accounted for just under a quarter of all contacts made over the weekend. A brief upsurge during hour 4 and some activity in the first part of Sunday morning were the only times we managed to exceed our average QSO rate. An overall rate of 94 contacts in 16 hours gives less than 6 QSO/hour overall.

Year on year comparisons are not that informative as conditions are rarely equal across the years but 94 QSO is low by our recent standards. You have to go back to 2008 to find a similar total number (if last year which had its own problems is excluded). We finished 3rd in class in that year, so if conditions were as flat as we think they are the number of QSOs might not be such an issue.

Again year on year comparisons are not very instructive, but ignoring last year, which had its own set of problems, you have to go back to 2008 for a similar points haul and 2006 for a similar average points per QSO.

Half our score was achieved in the first 4 hours, indicating the comparative slowdown in QSOs as it became progressively harder to winkle out un-worked stations or elicit a response to a CQ call.

Interesting hours were 2, 3, 6, 7 and 10 where high value stations were worked, particularly in the last 3 of those hours. However, in the case of hours 6 and 7 only a single QSO was recorded in those hours and whilst they were certainly significant in terms of this years performance the statistical importance of a single high value QSO is mis-leading. Hour 10 included 2 QSOs but one of these was our best DX so again a slightly skewed average results.

The early Sunday morning shift was again fruitful all be it not quite as good as we had found in 2010 when we first stumbled on the fact that this time period can be quite lucrative as some UK stations have yet to get back on air and the continent which is generally 1 hour ahead of us is already up and operating.

In fact for most of the contest the logging software was reporting over 200 points per QSO which would have been quite normal based on previous years operations, it was only during the last hours that we worked a flurry of shorter distance stations that reduced our overall score. In fact the final average of 167points/QSO is only 8% down on the average of 2006, 2007, 2008, 2010 and 2011. 2013 was an abnormally good year, 2012 we didn’t operate and 2009 we were in a different class.

It is difficult to try to rationalise what we are finding. Certainly the number of QSOs and the average value of those QSOs is down on many previous years. Did everyone suffer or was our station deficient in some way? As was stated earlier there seemed to be a lower level of activity on the bands, a fact other people we have spoken to since submitting our logs confirm, yet we managed some good DX all be it not at the levels seen in 2013

Tables 3 and 4, below, present a summary of the distances worked. The best DX was PA1T at 986km. 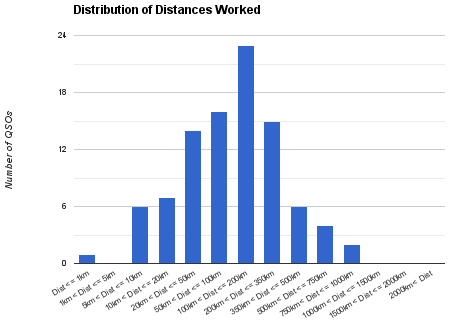 As noted above average distances were a little lower than in previous years, although our best DX would stand comparison with almost every previous year except 2009.

As would be expected, given the mean of 167km, the largest grouping of contacts is in the 100km – 200km band. More or less equal umbers are in the distance bands immediately above (200km – 350km) and below (50km – 100km). The typical bell curve distribution is then skewed by the large cluster of 20km – 50km contacts.

As in previous years about 10% of all contacts were outside the UK. It was noticed that there was a paucity of GI/2I/MI stations as well as EI stations.

Unusually we managed a contact with both Jersey and Guernsey (although it is thought that the GU contact was actually on Alderney) which is quite rare. Once again we missed out on collecting all of the UK RSLs.

Below is the full log submitted following participation in this yeas event. If any information is received post submission updates will appear in the "Notes" column.

We lost 9 contacts to errors in logging which at 9.5% of the contacts is marginally better than previous years. Sadly this included our claimed best DX of PA1T. Points loss was closer to 17% partly as a result of the hit on high scoring stations such as PA1T.

We finished 7th overall in the low power class but were the highest scoring single band entry in the class.

Stations above the Loch Fyne Operation were several thousand points ahead of us, although only one operation managed better than 150 QSO so perhaps the number of participating stations was down on previous years.