Oh the best laid plans of mice and men. This year has been a disaster. This is a natural disaster I would hasten to add; our planning was again up to its usual standard of readiness but this year the elements have conspired against us. I doubt we are alone, initial communications indicate that other operations have had to rapidly relocate to less waterlogged sites. This wasn't an option for us.

Further heavy showers or longer periods of rain are expected today, with large totals in places.

The public should be prepared for the likelihood of surface water flooding and some disruption to travel and outdoor activities, particularly in the amber warning area.

The red warning that was in force for parts of south Devon and west Cornwall has now been removed as the worst of the rain here has eased, although impacts of rain that has fallen continue to be significant locally.

These conditions are on top of prolonged rainfall, the Met Office provisional figures released on 2 July 2012 show that for June 2012 double the average amount of rain has fallen, making it the wettest June since records began in 1910.

This is the second record breaking month of rainfall this year, with April 2012 also topping the rankings. The period from April 2012 to June 2012 is also the wettest recorded for the UK.

Unsettled weather has never been far from the UK during April 2012 to June 2012, with only the latter half of May 2012 seeing a spell of prolonged fine weather.

Movements in the track of the jet stream, a narrow band of fast flowing westerly winds high in the atmosphere, have contributed to the weather we have seen.

June 2012 has seen periods of heavy and prolonged rain, as well as short but exceptionally heavy showers.

Looking at individual countries, June 2012 has been the wettest on record for Wales and Northern Ireland, the second wettest in England, and the eighth wettest in Scotland.

Many areas have seen extremely high rainfall – with 83 (out of 237) observation sites marking their wettest June on record. Some of these aren't significant as they have very short recording histories, just a year in some cases, but others have been operating much longer – Otterbourne in Hampshire, for example, has been operating for 119 years.

One of the key features of June 2012 has been that the far north west of the UK, traditionally the wettest part of the country, has been remarkably dry.

Up until quite late in June 2012, a few stations in this area were below their record lowest rainfall amounts – but they just missed the record books with rain falling in the last few days of the month.

Current or previous wettest years on record are: 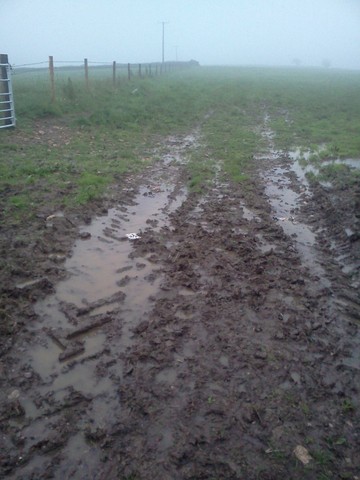 Whatever the figures might or might not reveal the practical upshot is that despite being sited at the top of a hill and with relatively shallow underlying stone the ground was saturated and already badly churned up by both farming plant and the livestock that normally inhabit the field.

Given both the conditions and the forecast which was for further heavy rain on Saturday and showers on Sunday we decided:

Consequently we felt that discretion was the better part of valour and have decided not to challenge this year. Naturally we wish all of those brave hardy souls fortunate enough to have a stable base of operations all the best and we hope to see you in the 2013 contest. Until then 73.