South Bristol ARC operated the Club Station G4WAW/P from our regular location on Dundry Hill, the site is approximately 210m AOD (Above Ordnance Datum – Mean Sea Level at Newlyn in Cornwall), with a clear take off for signals to all points of the compass.

There are a number of communications masts surrounding the site, although there was no evidence of any inter-modulation effects and the noise floor was surprisingly consistent in all directions.

Weather for the weekend was fine, dry and warm. Although the hilltop was more exposed than most places with a significant breeze keeping temperatures down.

Following the successful mix of equipment employed in previous years once again the station was assembled from:

The heavy equipment was brought to site on the Friday evening before Field Day and erected on the Saturday morning.

It is true that with a certain amount of initiative and familiarisation we are now able to comfortably erect the station, antenna and accommodation well before the start time of 14:00 UTC. This year was another example of this with the equipment in place and ready by 13:00 UTC.

As with 2009, Kens patented hinged mast base greatly eased the process of putting up the beam. We even shot a short video to prove how easy it is which you can view below. Additional video footage from the club can be found on our YouTube channel. 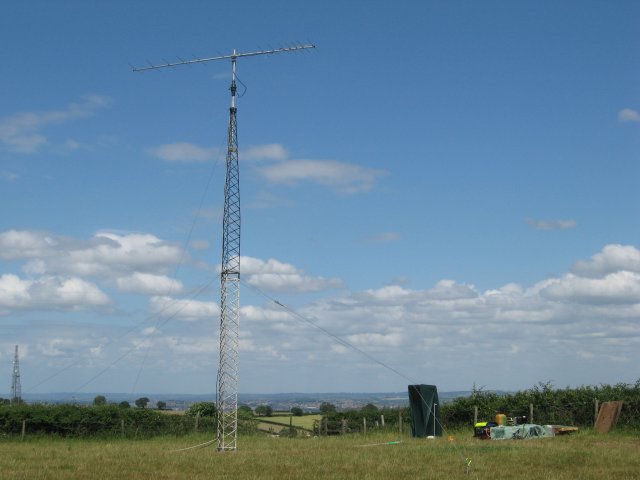 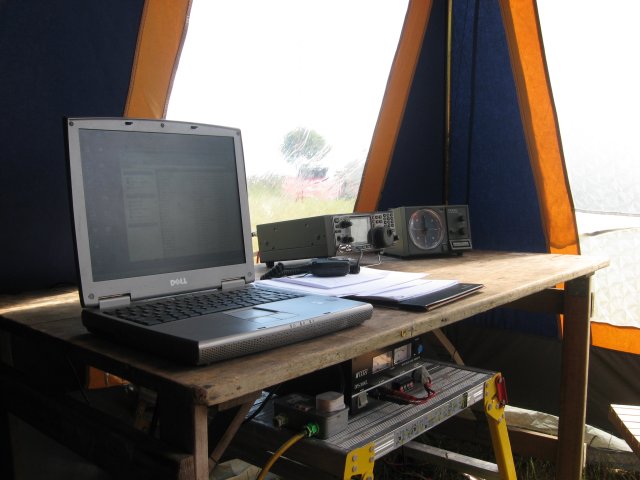 The operating rules for this class of the contest require that the station is only operated for 16 out of the 24 hours available, and that the shut down periods must total 8 hours and each shut down must not be less than 1 hour. We elected to shut the station down from 22:00 UTC to 06:00 UTC.

The decision as to when to shut down was made on the basis of the dwindling QSO rate in the late evening of the Saturday, plus our experiences in 2009 when an early start successfully bagged a number of high scoring contacts into Europe on Sunday morning before the remainder of the contest entrants were back on air.

Table 1 sets out the number of contacts made at various times in the contest. Overall 162 contacts were logged, however it is known that 4 of these were incomplete so the number of QSOs claimed by the club is actually 158. This figure of 158 is subject to adjudication and confirmation through check logs.

In previous years we have lost around 10% – 11% of the claimed QSOs through errors in the log either made by ourselves or by the other station in the QSO. These errors lead to the claimed QSO being discounted. If a similar level of error is experienced this year then the actual number of QSOs awarded is likely to be in the region of 141. This figure is higher than the number of QSOs awarded last year when we submitted 143 QSOs and were awarded 126.

Overall a QSO rate of 10.13 QSO/hour was obtained. This equates to about 1 QSO every 6 minutes and is very similar to the overall rate achieved in 2009. Predictably the highest rates were achieved at the start of the contest when the number of new stations was at its highest. The rate of 18 QSO/hour is about 1 QSO every 3.3 minutes.

Lowest QSO rates were recorded at 18:00 on Saturday and again at 07:00 and 08:00 on Sunday. In the case of Sunday this low QSO rate corresponds to a failure in the PSU and the need to go off site and return with a replacement item. The Saturday occurrence was surprising, last year saw an upsurge in QSOs about 18:00 rather than a downturn.

Overall we have claimed a score of 31,145 points. Based on 162 QSOs this represents an average score of 192points/QSO. For comparison purposes in 2009 an average of 230points/QSO was achieved although the claimed total then was only 32,852. Overall the total points scored compare well with 2009 although propagation conditions were very different.

In 2009 there were a number of short Sporadic E openings allowing very long distance contacts into Spain and Portugal which were not replicated this year.

Best points scoring occurred on Sunday morning when a number of European stations were worked taking advantage of the limited number of UK stations on air at that time coupled with the continent being one hour further ahead of British Summer Time.

The failure of the PSU in the second hour of Sunday represented bad timing. There was every possibility that the success of the 06:00 hour would have continued had the PSU not forced us off air for part of both this and the following hour.

Table 3 below shows the breakdown of stations worked by country:

The best DX was recorded into France at 942km closely followed by Spain at 920km and a second French station at 871km. After this the distances dropped to the upper 600km distances, with a German, Scottish, French, second German and second Scottish station making up those over 600km from Dundry.

90% of all contacts were inter-G, that is within the United Kingdom. Only 10% were with other European countries.

Table 4 below shows the spread of distances worked:

The bulk of the contacts made (71%) were between 50km and 350km. The number of local contacts (i.e. those less than 10km) were surprisingly low at only 5% of the total QSOs made, very few club members were worked over the weekend which contributes to this low figure.

The average QSO distance was 197km. The graph below approximates a normal distribution centred on a mean of just under 200km. 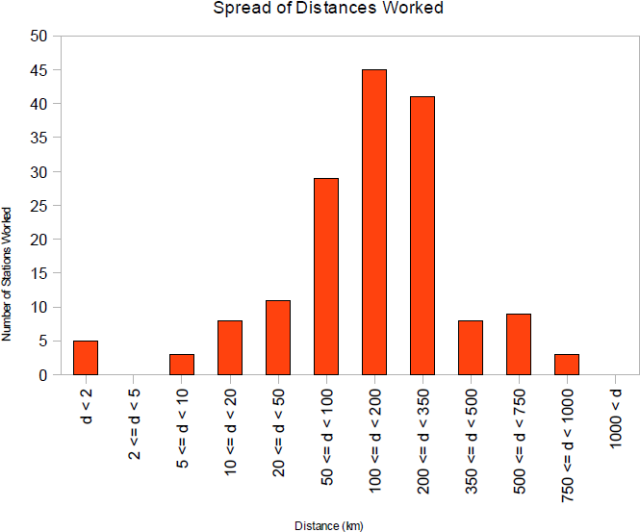 The results of the VHF Contest Committee were published on the 13 September 2010. General comments confirmed some of our own findings, specifically that the area worked was down on 2009. Many stations reported high winds during the weekend which did not seem to plague us particularly. There is always some wind given the exposed hill top location but nothing that was likely to remove the tent as occurred to some entrants.

After looking very strong during the scoring period as logs were submitted we ultimately ended up 4th in class compared to 3rd in previous years.

The adjudicated score was 24,916 compared to our claim of 31,145, a reduction of 6,229 points or 20%. Some of this loss may be attributable to the re-scoring that occurs as the VHF Contest Committee use the G0GJV algorithm for scoring contacts which may not be implemented in the SD logging software we employ.

However much of the loss must once again be ascribed to poor logging by us. We claimed a total of 162 stations but knew that 4 were incomplete. However our adjudicated log only awarded us 139 QSO (compared to an estimated 141 QSO based on last years losses) a loss of 19 QSOs representing 12% of our total claimed haul. Last years loss was a similar 10% – 11% so we remain consistent.

If we could have improved our logging accuracy by 50%, that is spotting and correcting half of our errors, then then we could have picked up an additional 10 QSO adding 1,793 points to our adjudicated score. This would have raised our adjudicated score to 26,709 which would have allowed us to overhaul G3TCR/P, who scored 26,172, and maintain our record of third places from 2007 and 2008.

Our confirmed best DX of 943km with F9KA/P was the best DX we claimed.

First and second placed stations in the Low Power category both scored highly with 53,804 points and 41,329 points respectively. This showing would not have been considered poor in the higher power Restricted Section that we entered last year where only the top 4 stations exceeded 50,000 points.