As the club has decided to try some DF "fox" hunts next year it will be necessary for club members to construct a portable directional antenna. There are a number of designs available but the primary requirements for the design here was as follows:

After some research a common design based around the use of steel tape measure elements to construct a 3 element Yagi antenna was settled on.

It was important that the basic materials were both low cost and readily available, what is required is:

The feedpoint includes a short "hairpin" match. Although the design incorporates a thick enamelled copper wire, reports of variations on this design suggest that just about anything seems to work. 14 gauge house wire works well, so does a length of 22 gauge hookup wire. It does not seem to matter if it is stranded or solid.

Although a Yagi antenna is typically designed to maximise gain, in the case of a DF antenna gain is secondary to a good front to back ratio. Modelling undertaken by the original designer suggests that this particular geometry should have a deep null to the rear. Figure 3 indicates the original modelling. 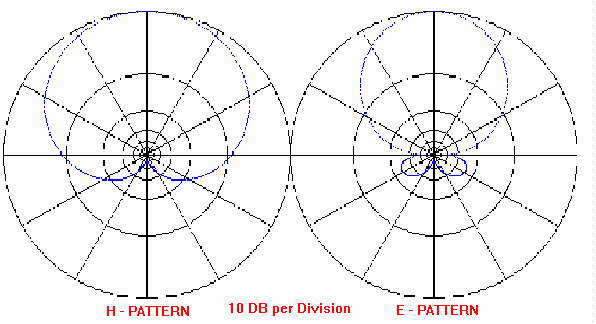 The version constructed here was subjected to an antenna analyser which produced the following results shown in figure 4.

The graph above shows that the SWR is:

Clearly the antenna is slightly high as the best SWR occurs at the top end of 2m, this is in part a function of the fact that as an American design it offers its best SWR in the middle of the USA band which is 144MHz – 148MHz. Clearly lengthening the driven element would address this providing there were suitable adjustments to the directing and reflecting elements.

One of the primary requirements was that the antenna had to be cheap to build, this particular version was constructed from the following materials:

The total price is quite reasonable, but if you remove the price of the enamelled wire since reports indicate that almost any wire form will work then the price is reduced to £18.00. If you have spare coax, plug and insulation tape which let's be honest most of us do have then the component price comes down to £11.74. If you've got enough cable ties to hold it all together then it's less than £10.00.

Cut the Boom to Length

The overall centre to centre dimension for the antenna is 205mm + 320mm giving 525mm. However:

Drill for the Mounting Points of the 3 Elements

Drill 3no. 6mm diameter holes through the boom at the positions of the reflector, driven element and director. When building this antenna initially 4mm dia holes were tried but it was not possible to comfortably pass 4 no. small cable ties through a 4mm dia hole so they were drilled out to 6mm.

Drill a corresponding 6mm dia hole in centrally in the 3 no. saddle brackets. The components used in this build had a slot in the base of the bracket which made it unnecessary to drill out the flat part of the bracket.

Cut the Elements to length

The design is based on 25mm wide steel tape but the observant will have noticed that the build utilised 20mm wide tape. This does not have an effect on the performance of the antenna, it was a conscious decision based on the cheap availability of 20mm wide tape measures in Wicks compared to 25mm tape measures. The difference is a mechanical one, when constructed from 20mm wide steel tape the driven elements are a bit flimsy around the mounting point and it might be necessary in the future to consider stiffening the driven element. 25mm wide steel tape would probably be naturally stiffer and hence more durable in the long term.

Extend the tape measure to its full extent and un-clip the tape from the spring recoil mechanism. This usually entails removing a metal tongue from a slot cut in the end of the tape.

It is straight forward to cut the steel tape using scissors or snips. Cut off the zero hook and then cut each element to the stated length:

Once cut the ends of the steel tape are very sharp, please handle the cut elements with care.

Although the length should be sufficient to identify the 3 different elements it may assist to quickly mark the element name in pencil on the rear of the elements.

Drill and Fit the Reflector

Drill a 6mm dia hole through the centre of the reflector element.

Drill and Fit the Director

Drill a 6mm dia hole through the centre of the director element.

With wire wool or a Dremel, at one end of both half length sections remove all traces of paint from the first 30mm of the tape to expose the steel material. This is essential if any sort of contact with the feeder and the hairpin match is to be made.

Drill a 4mm dia hole 10mm from the end of the tape elements ensuring this is drilled at the end where the paint has been removed.

Strip the outer sheath from the coax and separate the screen from the core.

Crimp a ring terminal onto each of the screen and core conductors. Insulate any exposed conductor with tape or heat shrink.

Cut about 120mm of enamelled copper wire and remove the enamelling from 10mm or so at either end. Fold the wire around the boom to create a hairpin shape with an 11mm radius (22mm dia) curve at one end and equal length legs.

Attach crimp ring terminals to each of the legs of the hairpin and splay these to suit the hole spacing in the saddle bracket.

Remove the screws from the saddle bracket and drill through the holes with a 4mm dia bit.

Using 4mm dia x 12 (min) bolts assemble the driven element onto the boom as a sandwich with the following order:

Once bolted up, slide the driven element to the correct position on the boom and fix in place with cable ties in the same way as the Reflector and Director.

Some versions of this antenna incorporate a choke next to the feedpoint. There appears to be some disagreement as to whether or not this is required but if you wish to include one then 7 tuns of coax around the boom is usually sufficient.

Once you have got this far all that remains is to fit a plug of your choosing, probably a BNC but this depends to a great extent on what rig you intend to use the antenna with and check the SWR.

Of course in its present form the elements continue to have sharp ends which will at some point in the future either cut the operator, observer or will snag on the upholstery of the car when being taken out or returned during a "fox hunt".

To overcome this and to provide a smaller package to carry around when not operating use self adhesive velcro, covering the ends of the elements with the softer half and attaching the other half to the flat underside of the saddle brackets.

In this way the sharp ends of the cut tape are protected by the soft velcro and it is now possible to fold the flexible elements back to the middle of the antenna and attach them to the boom whilst the antenna is not in use.