Whoever organised the weather for this years VHF National Field Day should be congratulated, and allowed to repeat the task next year. This year saw good weather across the entire weekend, not too hot on our exposed hilltop location, but generally very pleasant 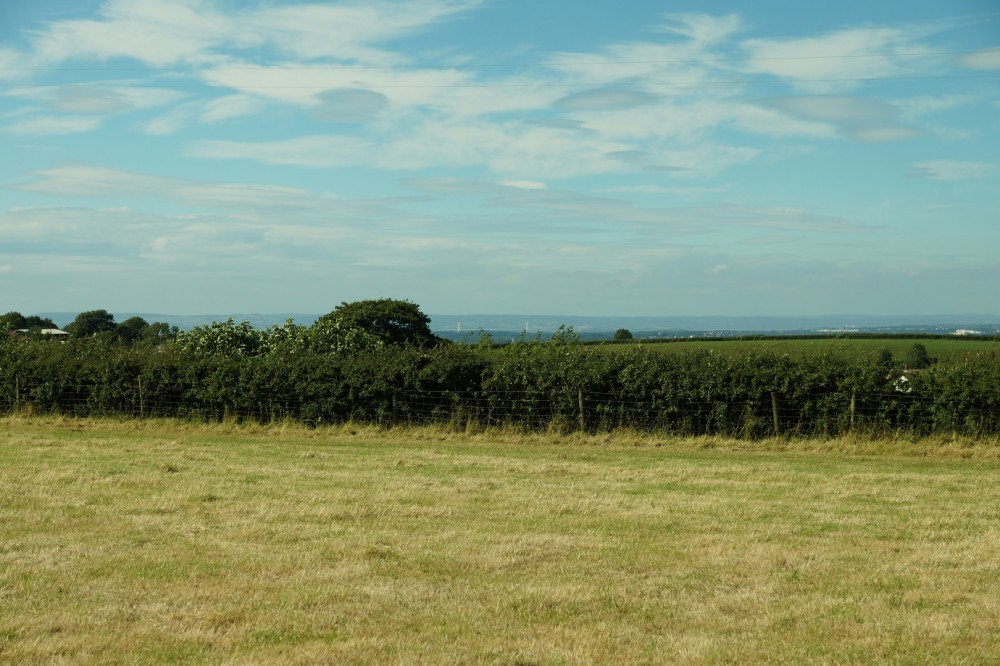 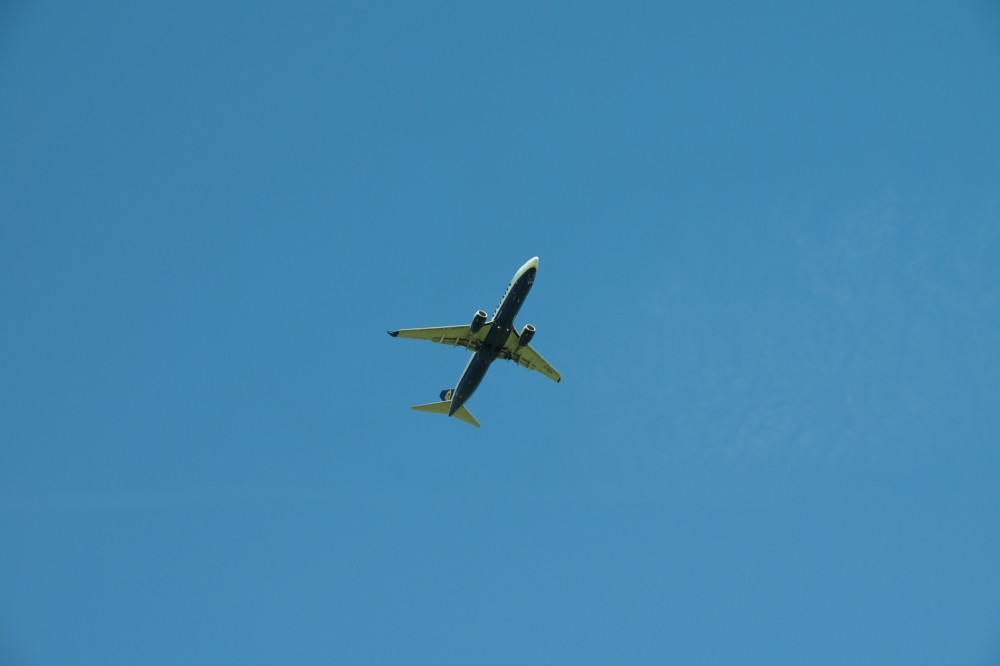 We were quietly confident of our ability to get set up in good time for the start of the event and so we went for what is possibly our latest planned start to date with members of the Club arriving in our chosen field around 11:00. Our accommodation this year was something of a departure from the norm. Historically we have operated from a tent which ultimately succumbed to the canvas equivalent of rust, the back of a builders van, a caravan awning, a caravan and this year a horsebox! 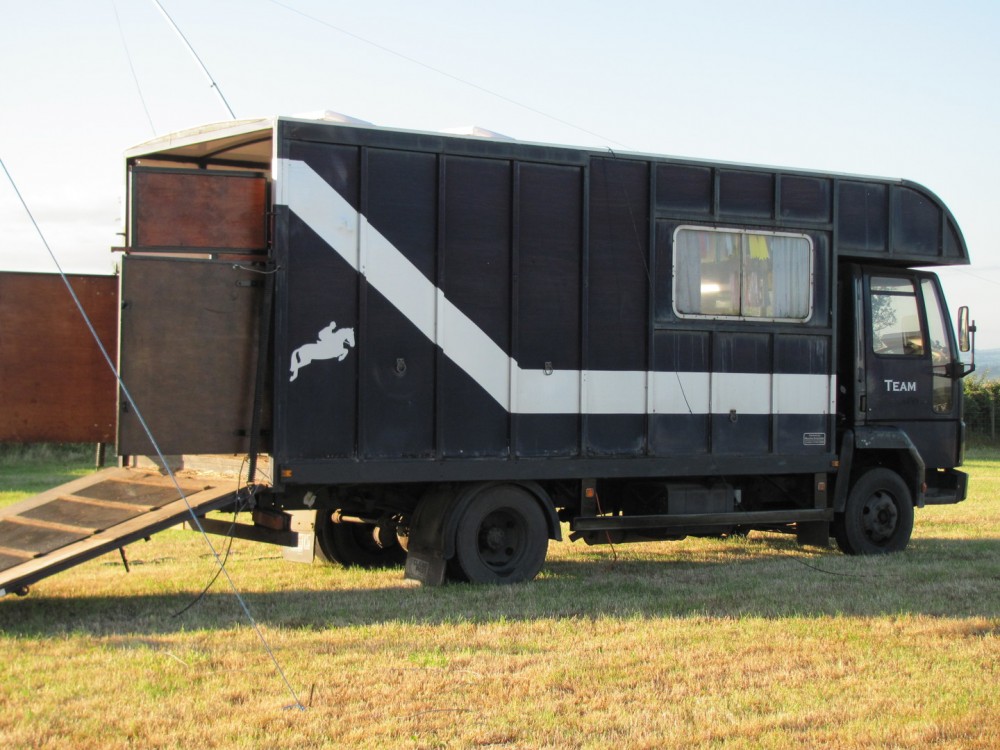 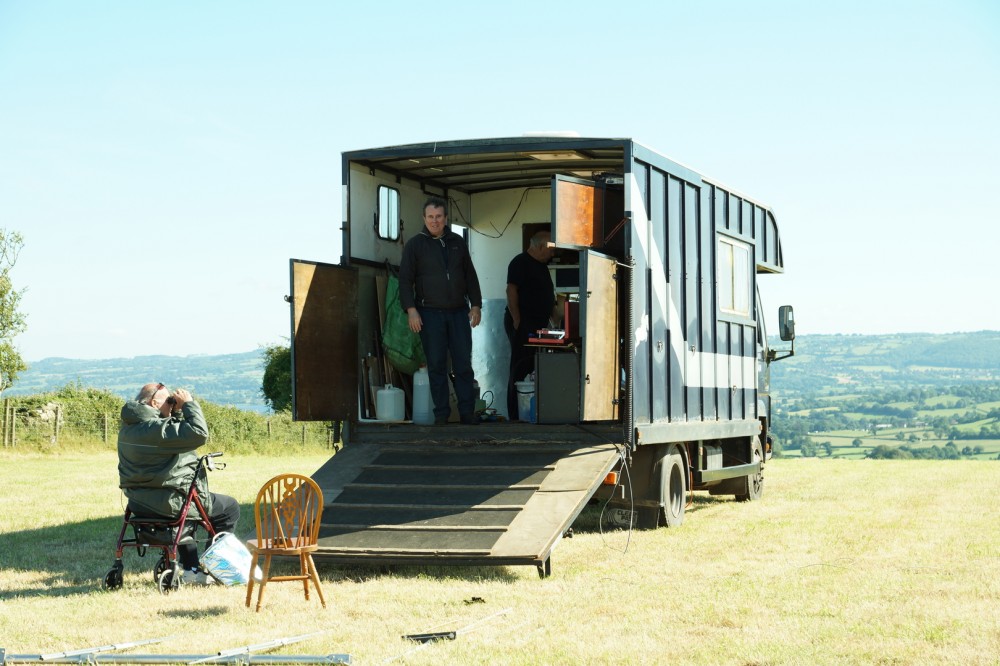 Although this was slightly unorthodox and viewed with scepticism by some taking part when they were told of the proposals it nevertheless proved to be a good solution. Despite being in the middle of some significant repair work following a prolonged water leak before coming into the current owners possession the horsebox provided operating space, catering space and overnight accommodation. And being wired for mains hookup it was a simple job to connect the generator and operate equipment. 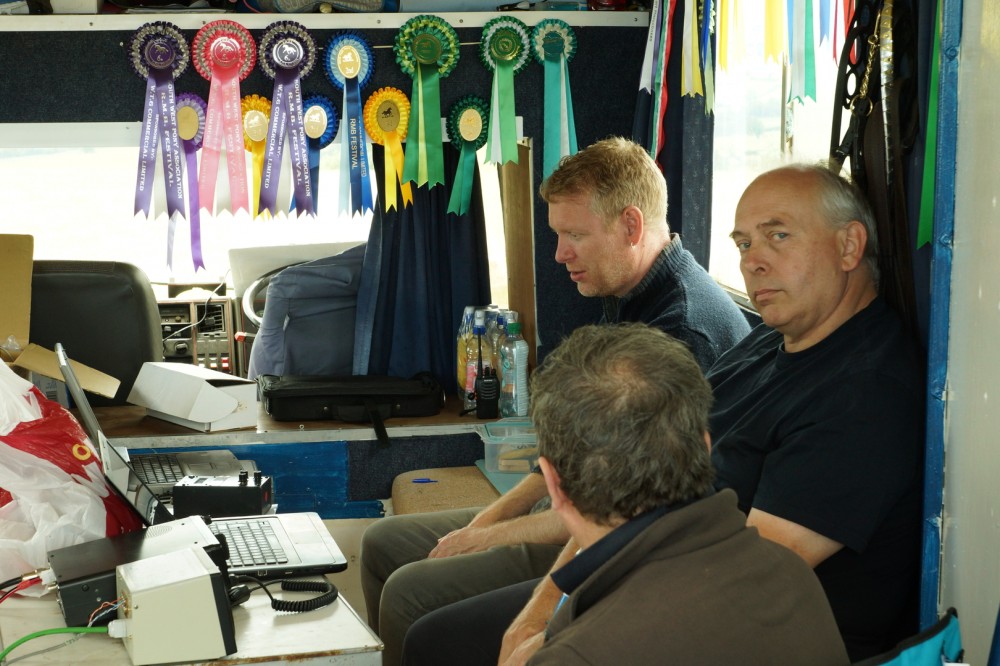 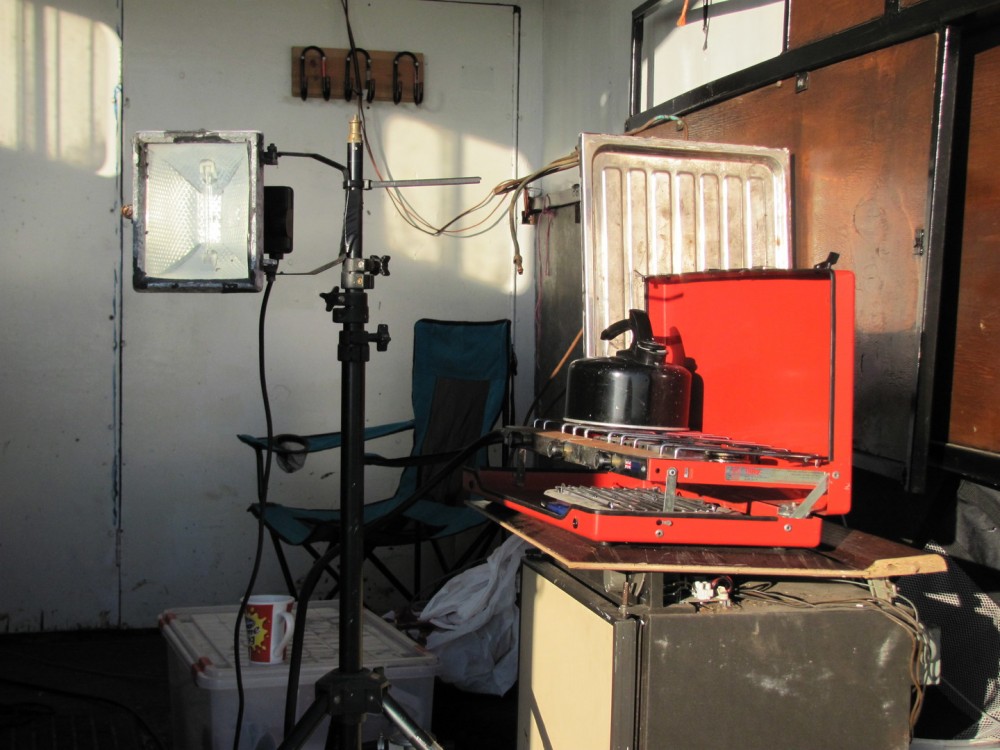 It is hoped that this vehicle will be available again next year and that by then its repairs will have been completed giving a far more usable combination of operating and catering space. Despite the rather basic nature of the fittings however the vehicle proved its worth although the winds that we were exposed to on the Saturday did certainly test the stability of the arrangement, we could do with some Star Trek inertial dampers!

As we were set up and ready over an hour before the start of the contest we elected to contact our colleagues billeted near Abergavenny who had taken a 2m beam and at least one transceiver capable of 2m SSB amongst their activation equipment. This gave them a chance to do some fault finding ahead of the contest although it has to be said that their accommodation and catering arrangements were a cut above ours! 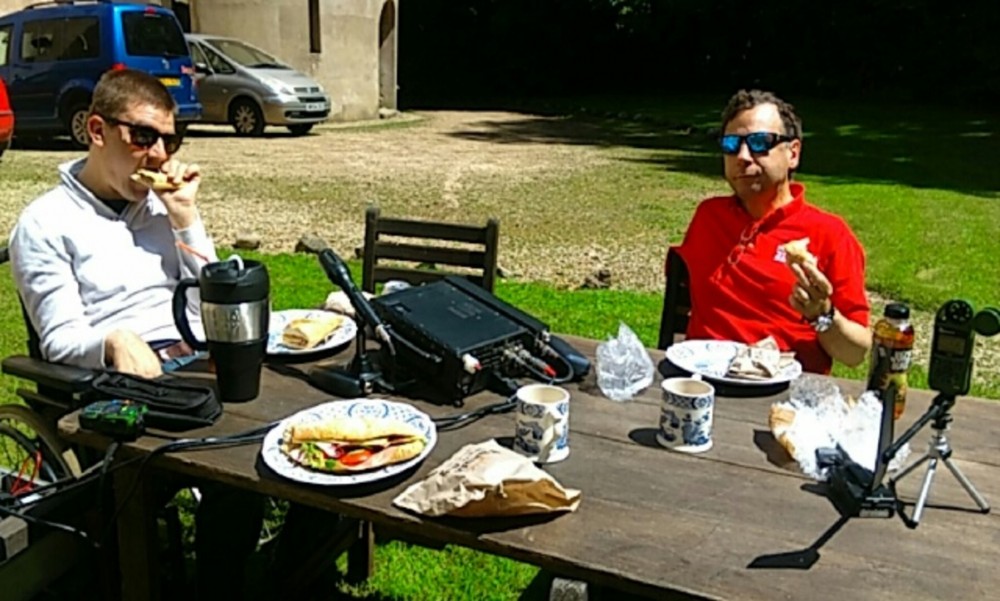 Our antenna arrangements were similar to most of the recent previous years and we seem to have restored the antenna to its full health and operating efficiency although some of the mast arrangements were a little on the strange side! 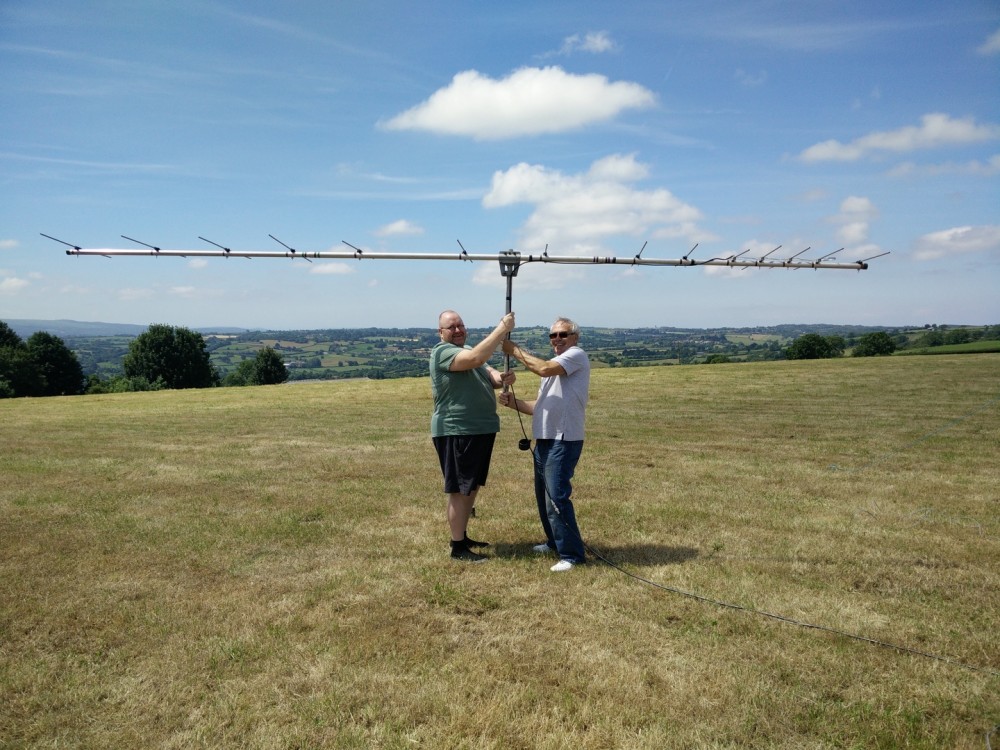 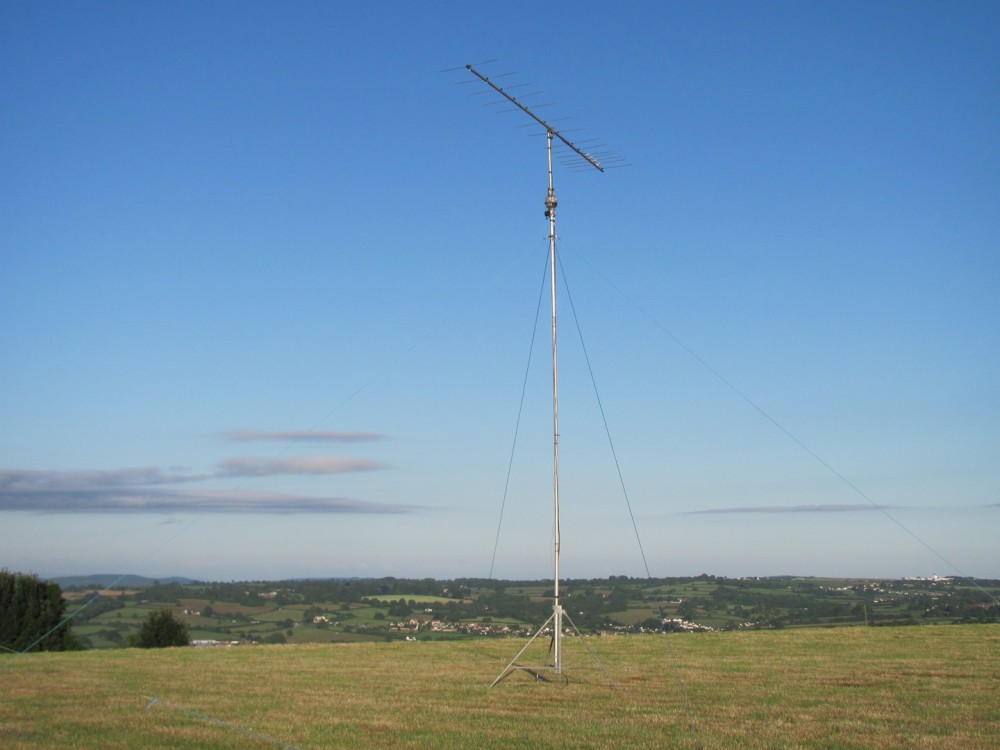 This years operation saw the first outing for our FT991 which certainly proved its worth, as did the various small upgrades we had performed to simplify cabling and connections for peripheral devices such as the rotator controller. 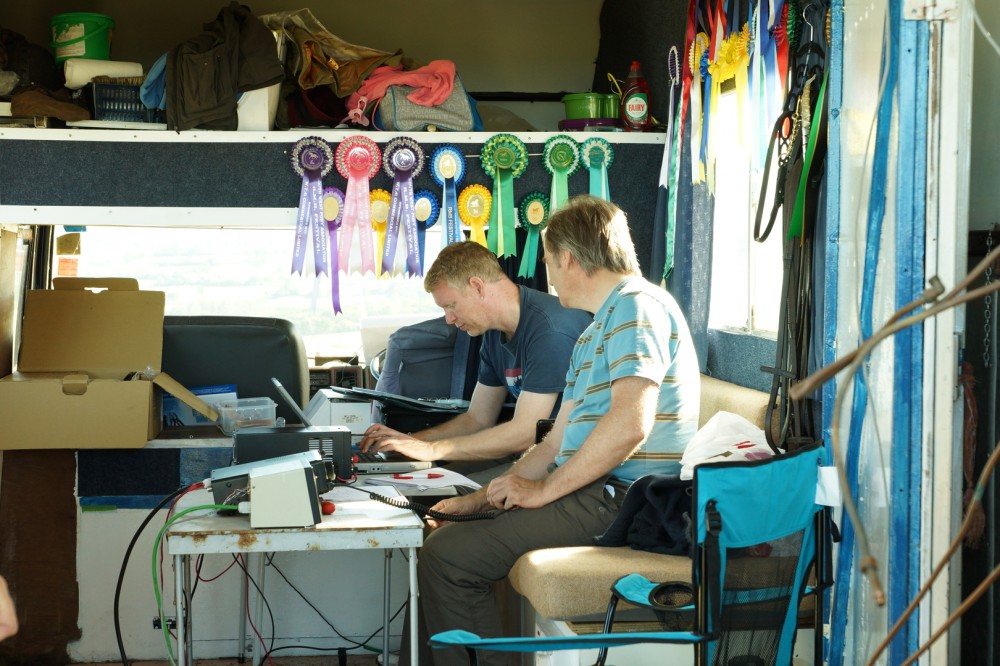 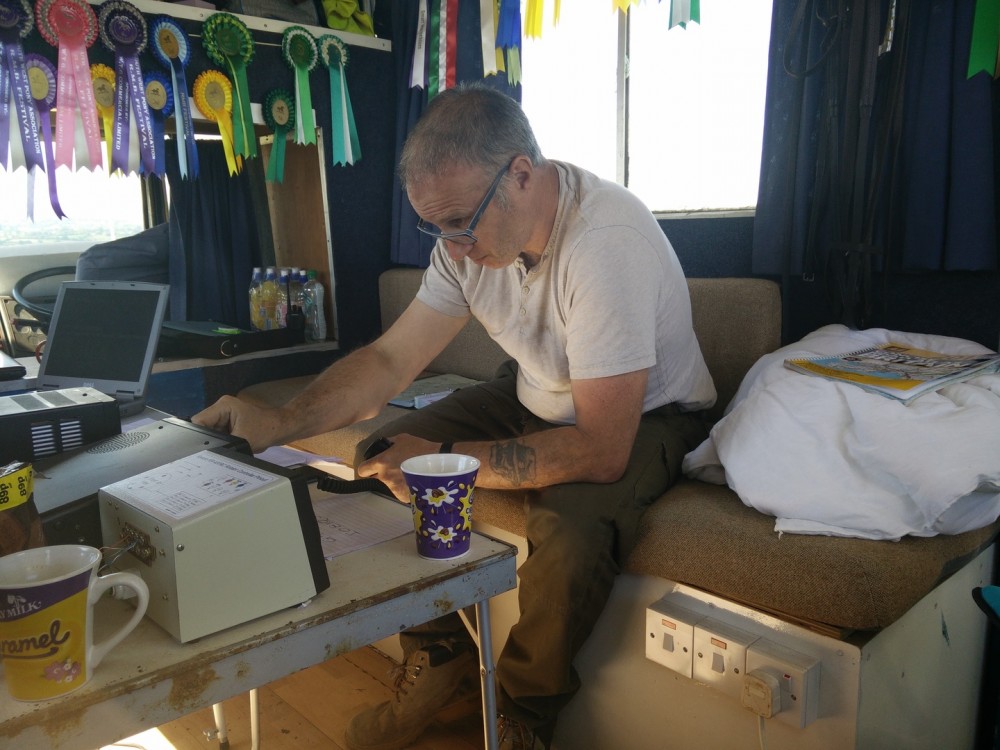 And finally, as all news bulletins like to say, a couple of observations from the field. The photo on the left is a lovely landscape shot taken from our operating location looking more or less south east, marked are the Pensford Viaduct about 8 kilometres away and just visible, although the original full definition image is much better in this respect is the Westbury White Horse some 37kilometres away. The picture on the right was taken at about 06:00 on the Sunday morning, the owner of the legs shall remain nameless to protect his dignity but he was less than impressed with the time at which operations resumed! 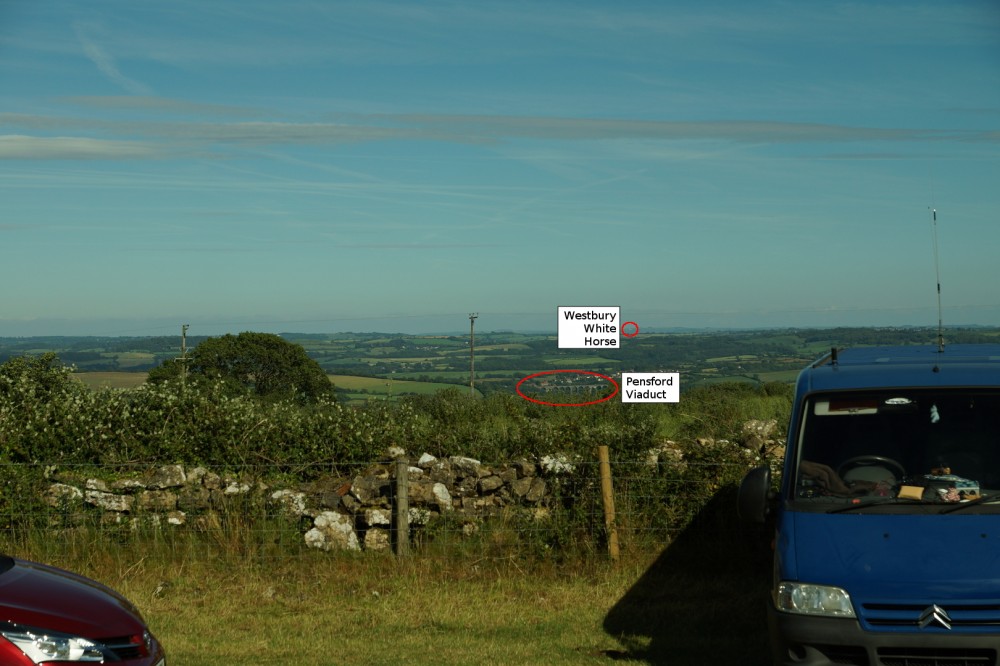 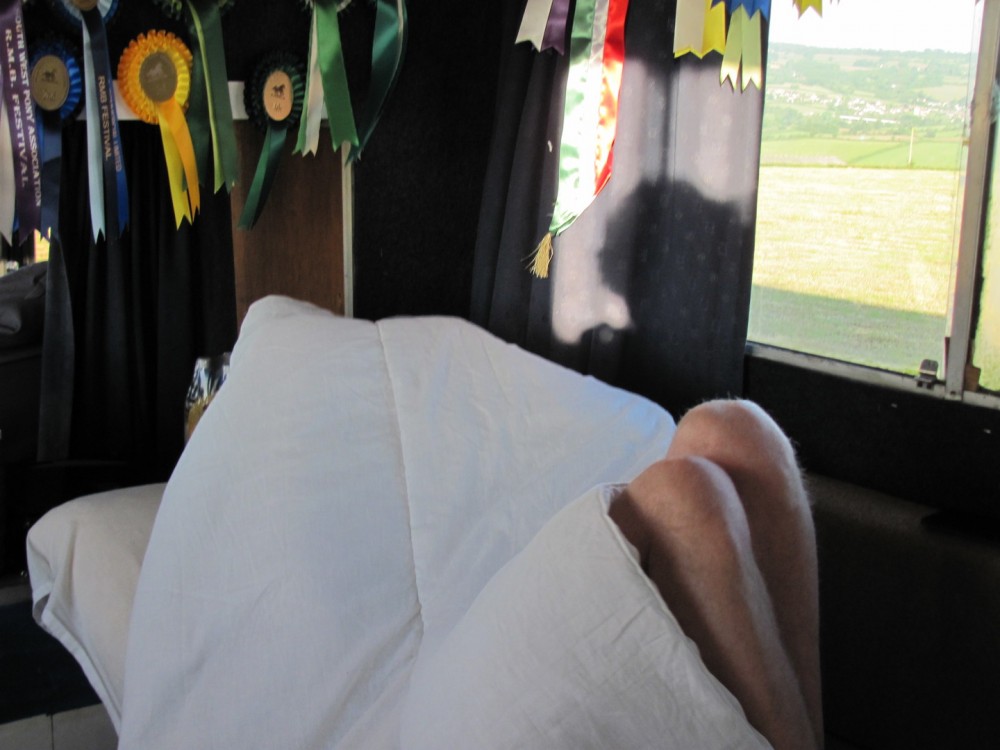 There are some recurring patterns, compared to 2016 it took longer to reach half distance this year than last. When operating we were predicting around 120 – 130 QSOs over the weekend based on the first 3 hours which was exceeded.

As in all previous years there is the usual flurry of QSOs in the first 2 or 3 hours after which the number of un-worked stations dwindles. We switched between calling and "hunt and pounce" throughout the operation.

Once the first 3 hours were passed the QSO rate in the following hours of Saturday was below the average for the contest which is a trend that recurs from previous years. Sunday morning was again kind to us, once again we were able to pick up useful contacts in the early hours of Sunday.

Tables 3 and 4, below, present a summary of the distances worked. The best DX was DR9A at 840km 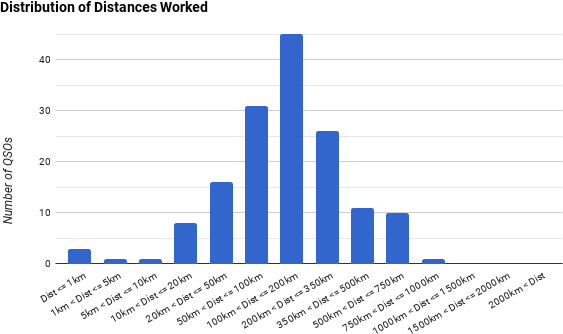 Although the distances worked are good, there is still a feeling that locations in the centre of the Country or on the east coast are better served in the contest than those of us on the west side of the country. If you consider that the effective working radius of any station is probably in the region of 200 – 300km then in the Midlands it is possible to work 300km in all directions. Similarly on the east coast the distance allows a full 360 degrees of operation into the continent. For us we found that with the exception of EI9E, the Wexford Contest Group, there was nothing of particular note for us to the west, in fact we spent most of our time working from North to South East.

There were a good proportion of European stations, typically 10% non-UK is the norm so managing over 15% this time shows that the bands were definitely with us this year. The average is well up on last year, although year on year comparisons are not that revealing since the condition are not directly comparable. Looking back over a number of previous years results although we have scored higher averages this years score is an above average performance, especially when it is remembered that in some previous years we have operated in the Restricted rather than Low Power class.

This year, although we had a good number of continental stations, our UK distribution was unusual. We worked a large number of English stations, a handful of Welsh stations and that was it, nothing in Scotland which is unusual, nothing in northern Ireland, the Isle of Man or the Channel Islands. 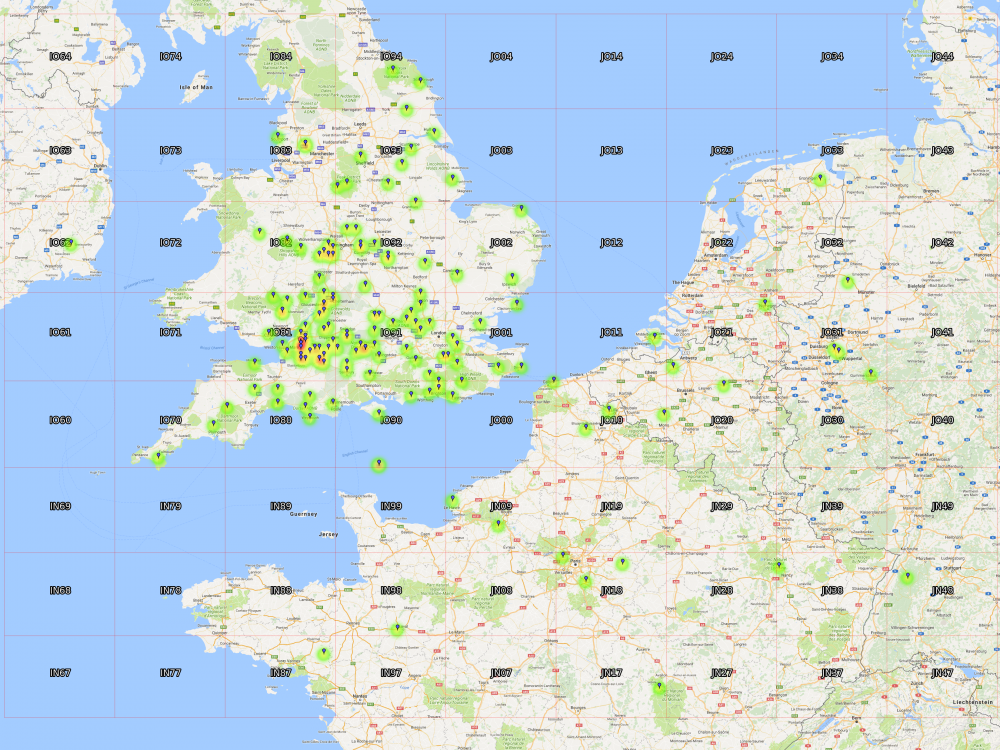 Below is the full log submitted following participation in this years event. If any information is received post submission updates will appear in the "Notes" column.

The closing date for log submission was 9/7/2017. By this time some 105 individuals and organisations had submitted logs in the various classes on 2m. Comparing those who took part with our log reveals:

We worked 3 of these sub 12 QSO operations.

Finishing second in class is our best ever result so well done to everyone who took part. Our score of 27011 is clearly ahead of the third place entry and the few errors that we did make would not have allowed us to overtake Warrington Contest Group.

A quick look at the average points per QSO is informative:

When looked at in this light our performance is a little less impressive, our lower average score being offset by a greater number of contacts. Interestingly Warrington Contest Group have a similar if less obvious condition; despite topping the table their average score is not the highest and once again the sheer volume of contacts has helped their position.

However, hats off to Loch Fyne Kippers who have managed a truly outstanding average points per QSO some 1.6 times greater than the next highest average and over twice the average for the class.