Former TRINITY LIGHT VESSEL 55, the ‘John Sebastian’, is moored in Bathurst Basin in the centre of Bristol and has her own postal address, namely: ‘The John Sebastian, Bathurst Basin, Bristol BS1 4RL’. However, there are some specific details that will be of interest to radio hams:

Just before this years event we were on the verge of cancelling operations. Our hosts, the Cabot Cruising Club, received an official communication from the powers that be at Bristol City Council who had decided that along with closing most of the City Centre to traffic over the weekend to facilitate the Bristol Grand Prix cycle race on the Saturday and the HSBC sponsored “Let’s Ride” on the Sunday that they would also close Cumberland Road, Commercial Road and Wapping Road to traffic and pedestrians to allow a new bridge, which is presumably something to do with ever ongoing Metro Bus roadworks, to be lowered into place along side the existing Old Wapping Bridge.

Of course the official communication gave no indication of the works simply that these roads would be closed and that as a direct result vehicular access to the John Sebastian would not be possible at all over the entire weekend of the Lighthouses and Lightships weekend. Naturally our hosts were apologetic but as the matter was out of their hands and there was unlikely to be any Club members in Bathurst Basin they felt unable to accommodate us this year, a situation we sympathised with but which none the less was the likely results of the Councils actions.

The Council did promise that there would be alternative pedestrian access to the John Sebastian, although the Main Contractor working on the bridge works did their damnedest to make this as difficult as possible.

Fortunately the Cabot Cruising Club are nothing if not resilient and Vice-Commodore Ben offered to walk into the John Sebastian at the start and end of both the Saturday and the Sunday to open up and let us on board and to close up and secure the ship when we packed up for the day. Our thanks go to The Cabot Cruising Club and Ben in particular for being prepared to put themselves out to this extent to allow our operation to continue.

So on the morning of the Saturday we assembled at a staging area off Gas Ferry Road near the SS Great Britain and transferred all of our equipment and as many people as possible to one car which was driven round to a loading/unloading point some 160m from the John Sebastian from where the equipment was manhandled to the ship itself. We expected this to be straightforward since the City Council had provided a written assurance that there would be alternative pedestrian access to the John Sebastian. The only route to the John Sebastian from Guinea Street or Commercial Road involved walking through the Contractors compound on the site of the public pay and display car park adjacent to the former General Hospital Site. 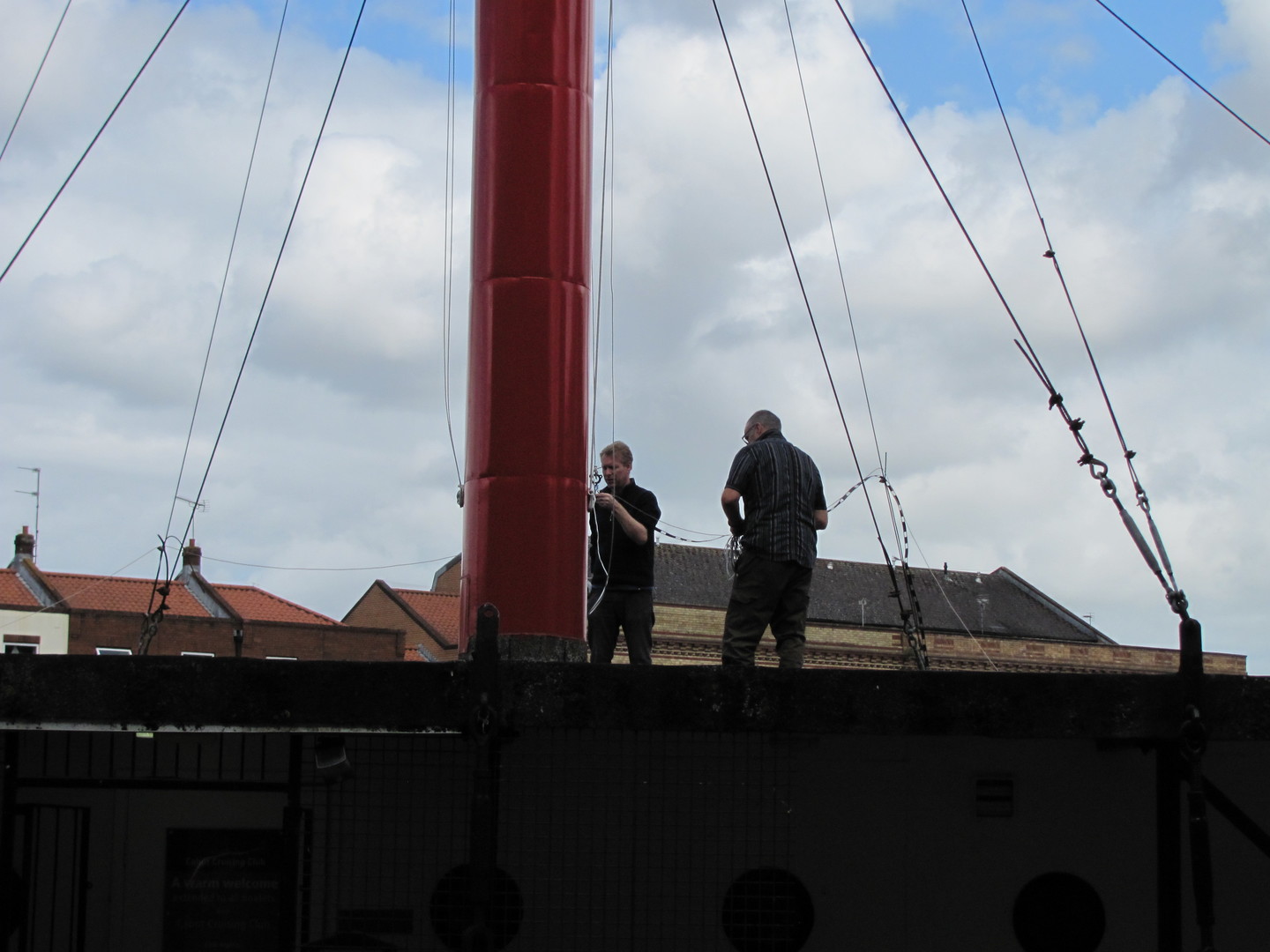 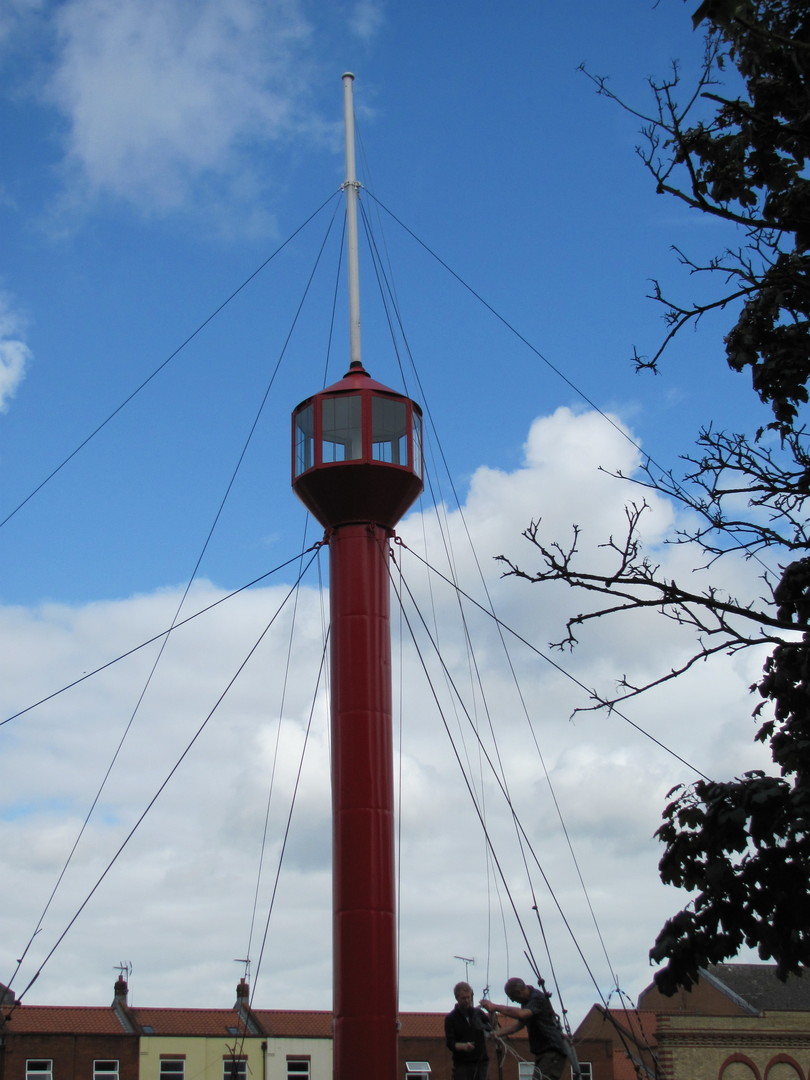 With the equipment on site Mark M0SKV and Joe 2E0EIC made a start on setting up whilst Andy G7KNA returned the car to the staging area and walked back to Bathurst Basin along the dock front which continued to be open to pedestrians. These three were joined by Eddie M0LJT and Julian M0JCE. 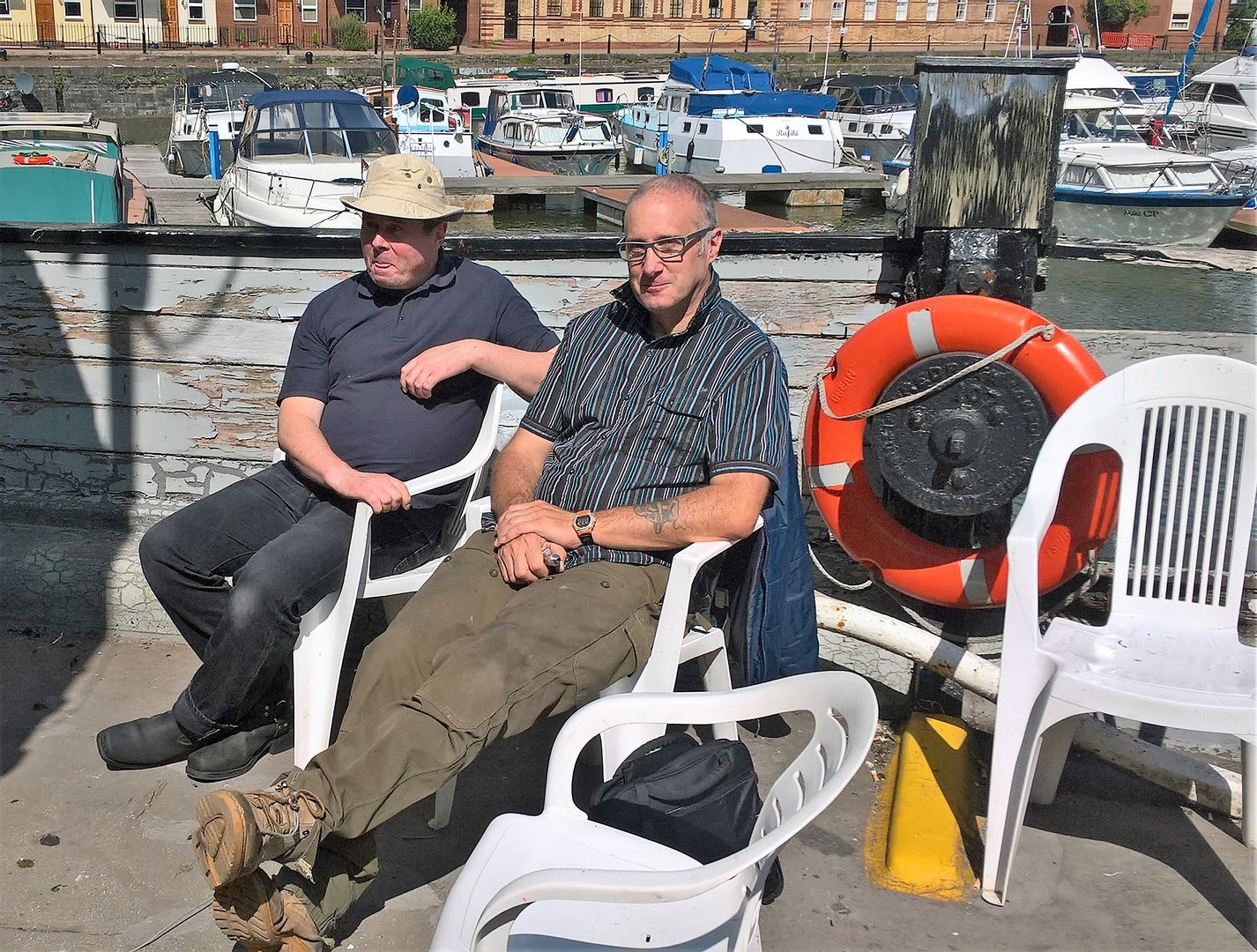 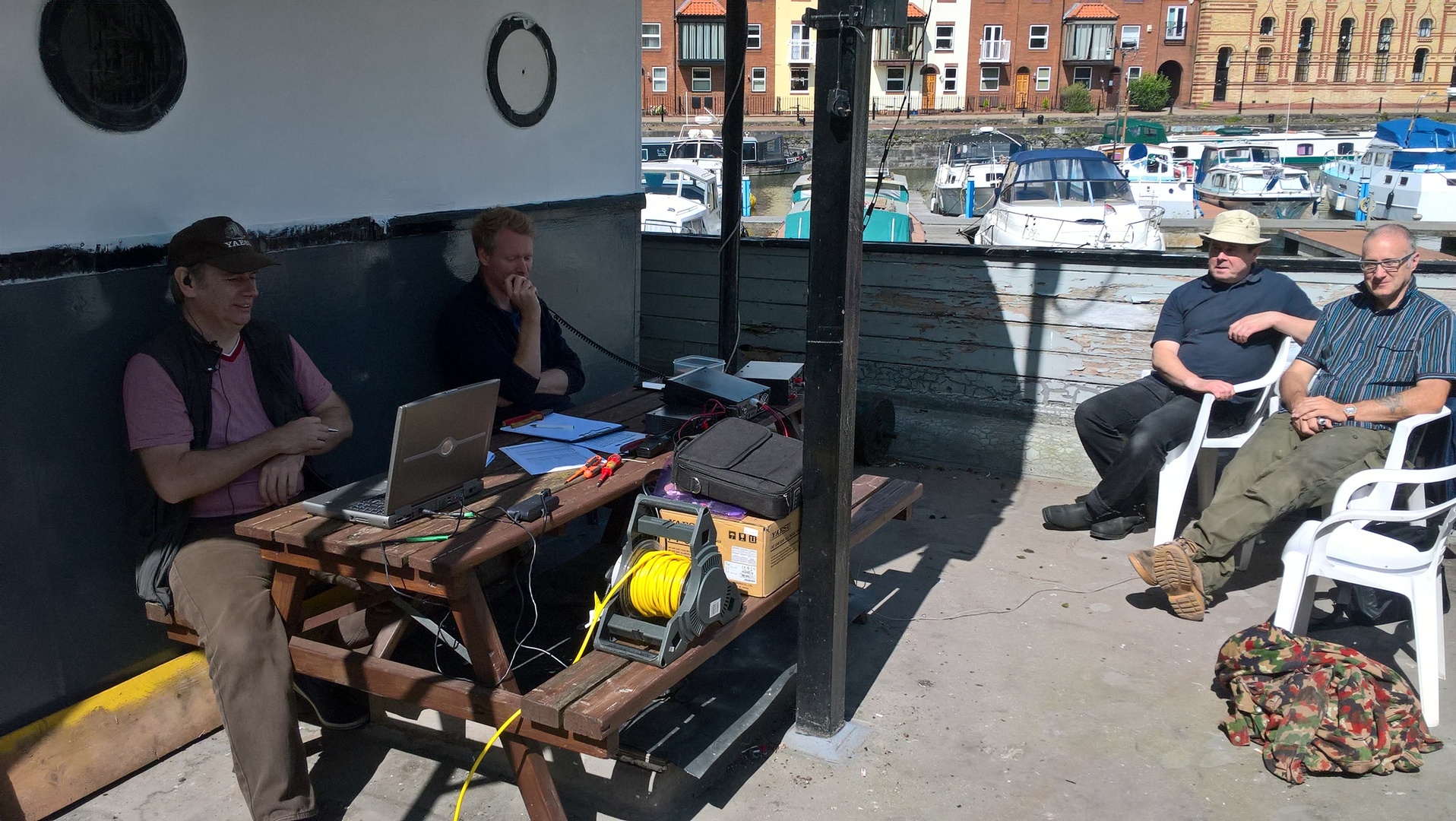 The operation followed the principles of previous years, an 80m doublet was suspended from the top of the flagpole atop the lantern tower thanks to a convenient lanyard giving the feedpoint an elevation of some 20m above the water level. The ends of the doublet were brought back to the bow and stern of the vessel probably some 6m – 7m above the water level. For good measure an earth wire was slung over the side of the ship. The remaining equipment comprised:

Not a particularly complex or high powered station we think you’ll agree, but quite practical when you consider the logistics of the weekend. 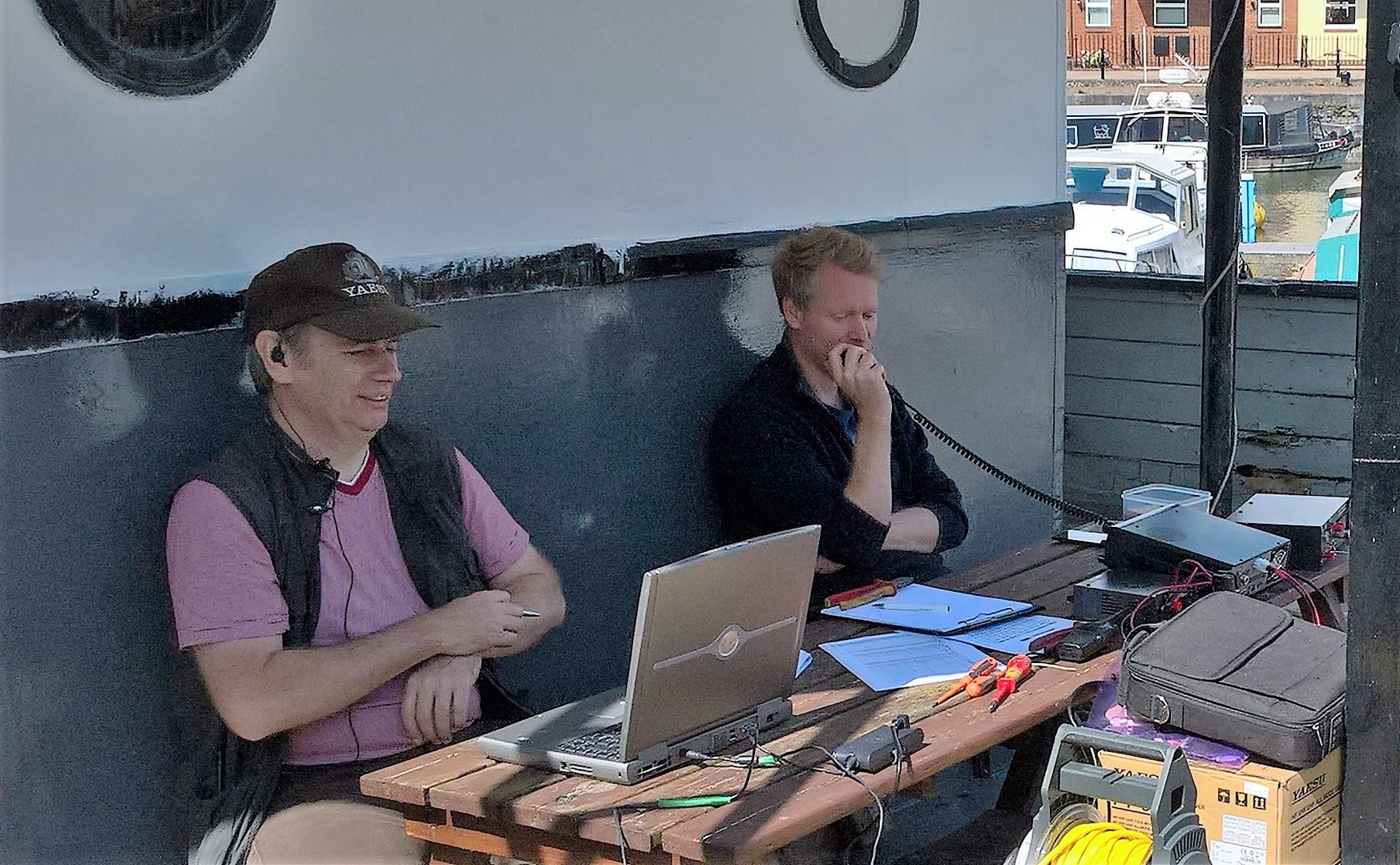 The bands were particularly problematic over the weekend, we lost count of the number of contacts who would be S9 on the first over and then disappear into the noise on the second over. This wasn’t helped by a high noise floor that we hadn’t experienced at this location in previous years. We don’t know if the increase in noise level is a permanent thing we will have to deal with or something unique to this year. The differences between this and previous years can be summarised as follows:

The first three items will be permanent so if these are the cause of the increased noise floor it is reasonable to assume that the situation will be permanent, however if the other items are the root cause or simply contributing to the problem then with a bit of luck next year will be better. Club members who were situated in quieter locations reported that on Sunday we were being called by a number of stateside stations that were audible on the outskirts of the City but inaudible to us. 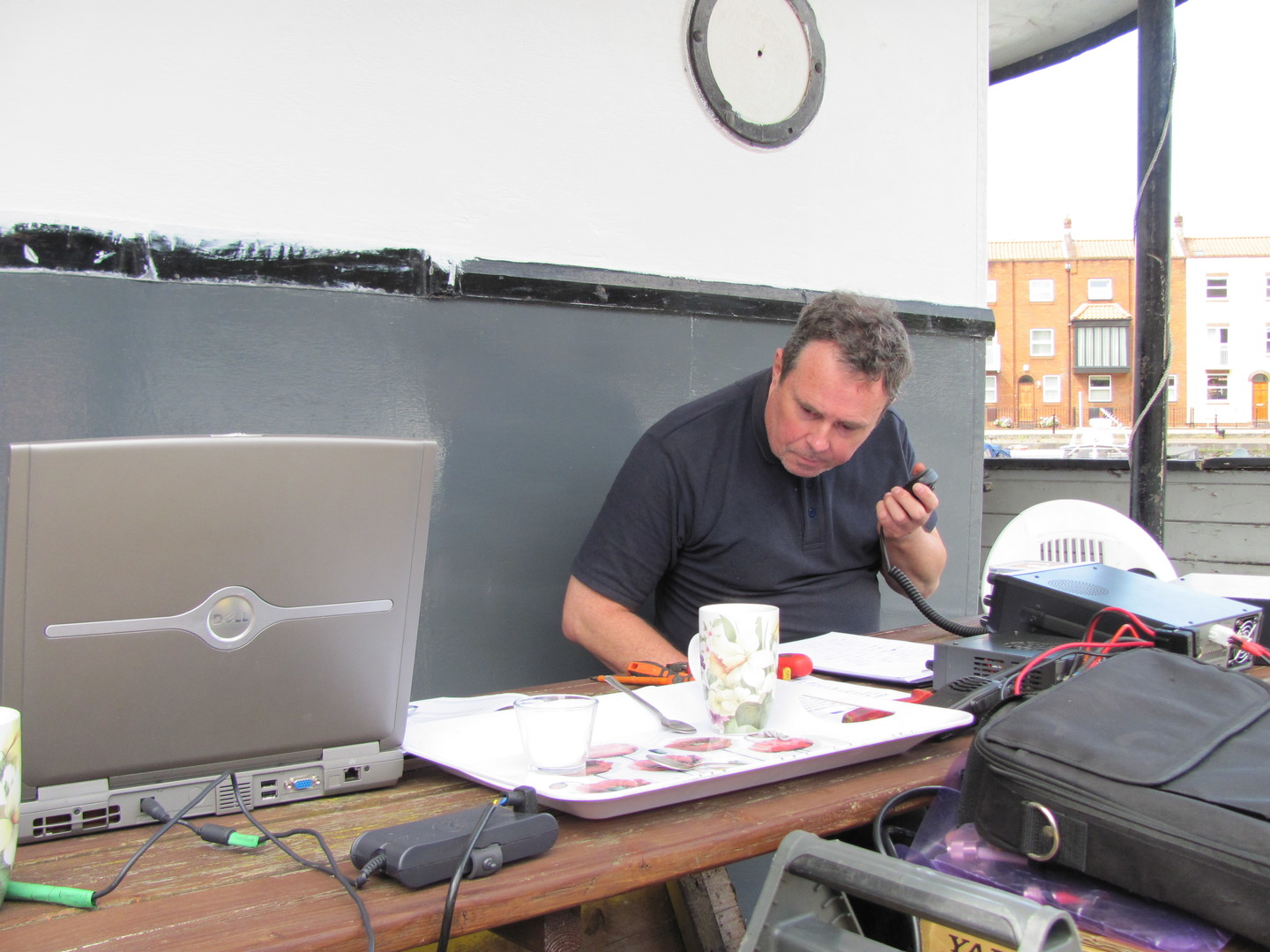 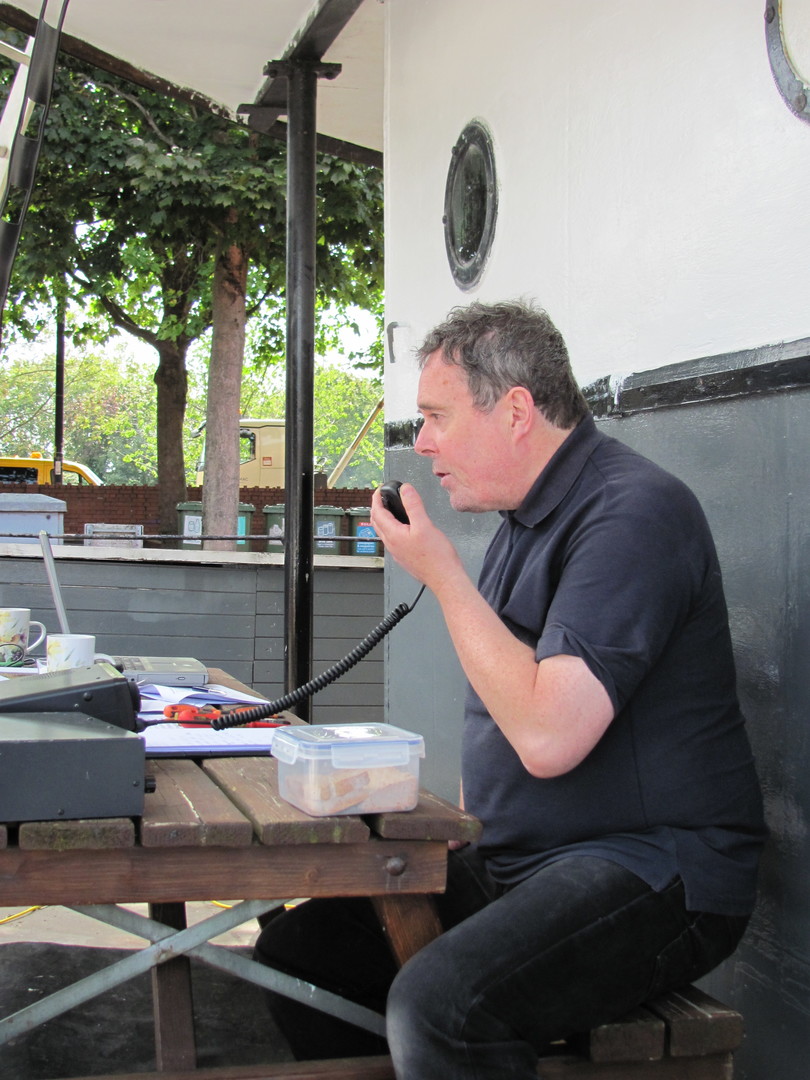 We had another issue on the Sunday, sometime around 14:00 a gas canister on board a boat just outside Bathurst Basin exploded sinking the pleasure cruiser. More details on the story can be found on the BBC and other, websites. We were unaware of what the cause was but the Police helicopter spent some time low overhead which meant that practically we couldn’t operate as a result of the rotor noise.

Best DX of the weekend was probably Malta which is some 2,150km.