After 2 years of COVID restrictions it was good to get back to Special Events and to reacquaint ourselves with the volunteers at the Saltford Brass Mill. There had clearly been some work within the site but as this was the first opening to the public for some time there was much work within the grounds to prune and otherwise tend to the garden area.

Location of the Operating Position

We were billeted within the grounds of the Mill on the island between the two mill leats as shown above, our hosts kindly erected a gazebo to provide shelter from what turned out to be a lovely warm and sunny weekend and mains power was taken from inside the Mill building.

Mills on the Air marks the start of the Special Event season for the South Bristol ARC, a chance to get the equipment out of the cupboard connect it all up, test it and brush up on those pile-up handling skills. We managed to connect with 16 of the 36 registered Mills on the Air stations giving us about 44% of the participating operations. The map below indicates where we worked another participating Mill.

The operation started with Mark and Andy arriving on site almost exactly 20 minutes later than planned, those who are familiar with our Special Event operations will know that this is business as usual! There have been a number of changes around the mill following lockdown and the redevelopment of some of the houses opposite the Mill site which has led to a change of parking restrictions, or more accurately the imposition of parking regulations where none have existed before. As a result, having unloaded the equipment from the car it was necessary to move out of the residents parking area and use the free public car park some 200m to the north of the Mill site, this car park is popular with the water sports enthusiasts who park here whilst: kayaking, canoeing and paddle boarding on the River Avon. The moral of this is that if you want to get parked in this small car park you should consider getting there earlier than Mark and Andy! 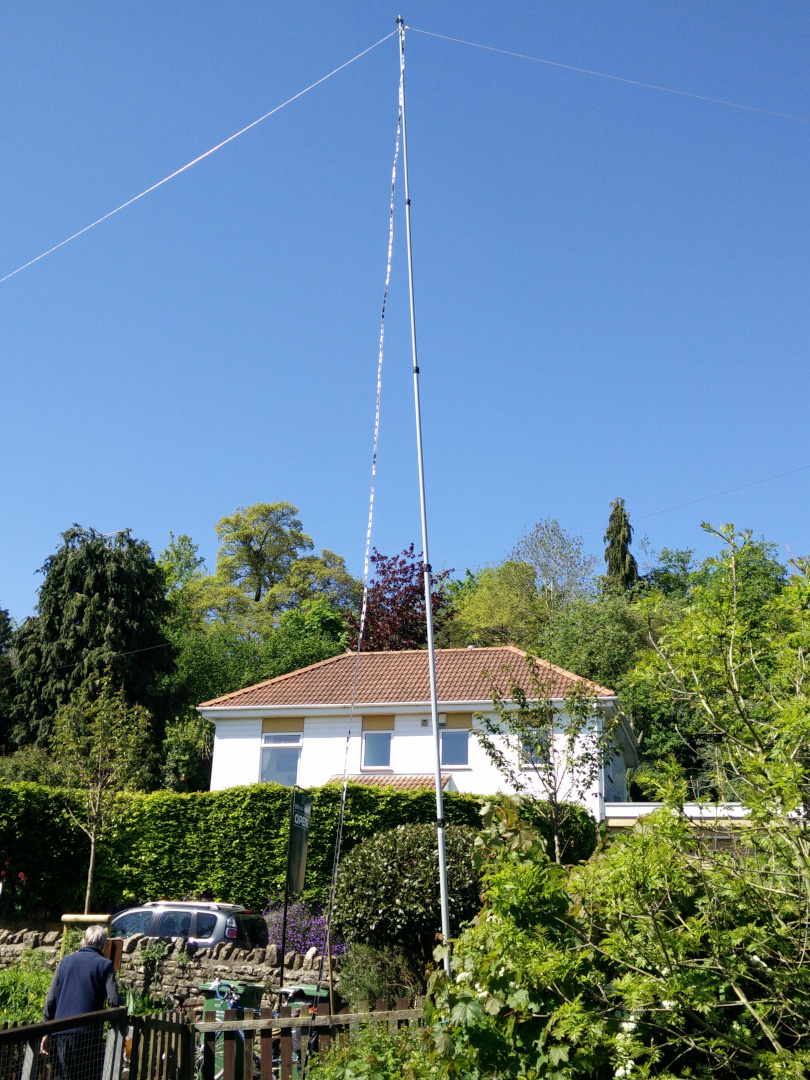 Setup went more or less to plan. Erecting the antenna was a little tricky with just two people, a third person would have been a great asset and of course as both people present were busy setting things up then there are no video, audio or photographic records of the setup process, although given that both Mark and Andy were a little rusty after two years of lockdown this might be for the best anyway.

Our TWEET history suggests that we had the station pretty much assembled by 10:37 when just the doublet remained to be erected, by 11:16 everything was in place and connected. These timings may be a little off as there was poor network coverage at the Brass Mill site which might have delayed postings. According to our log the first station worked was GB2CW, Chesterton Windmill operated by Stratford and District Radio Society. Our log has this at 10:28 UTC (11:28 BST) although Twitter suggests 11:39 BST which might give you an indication of the lag on social media.

Greg MW7BUF and Robin G3TKF turned up later in the day. Greg, who had not visited the site before, used the “What3Words” identifier which brought him to the front gate of the Mill, however as parking was some distance from here and the characteristics of the local road were almost as medieval as the Mill itself he had to scurry off and turn around before actually getting himself into the site to take on some logging. 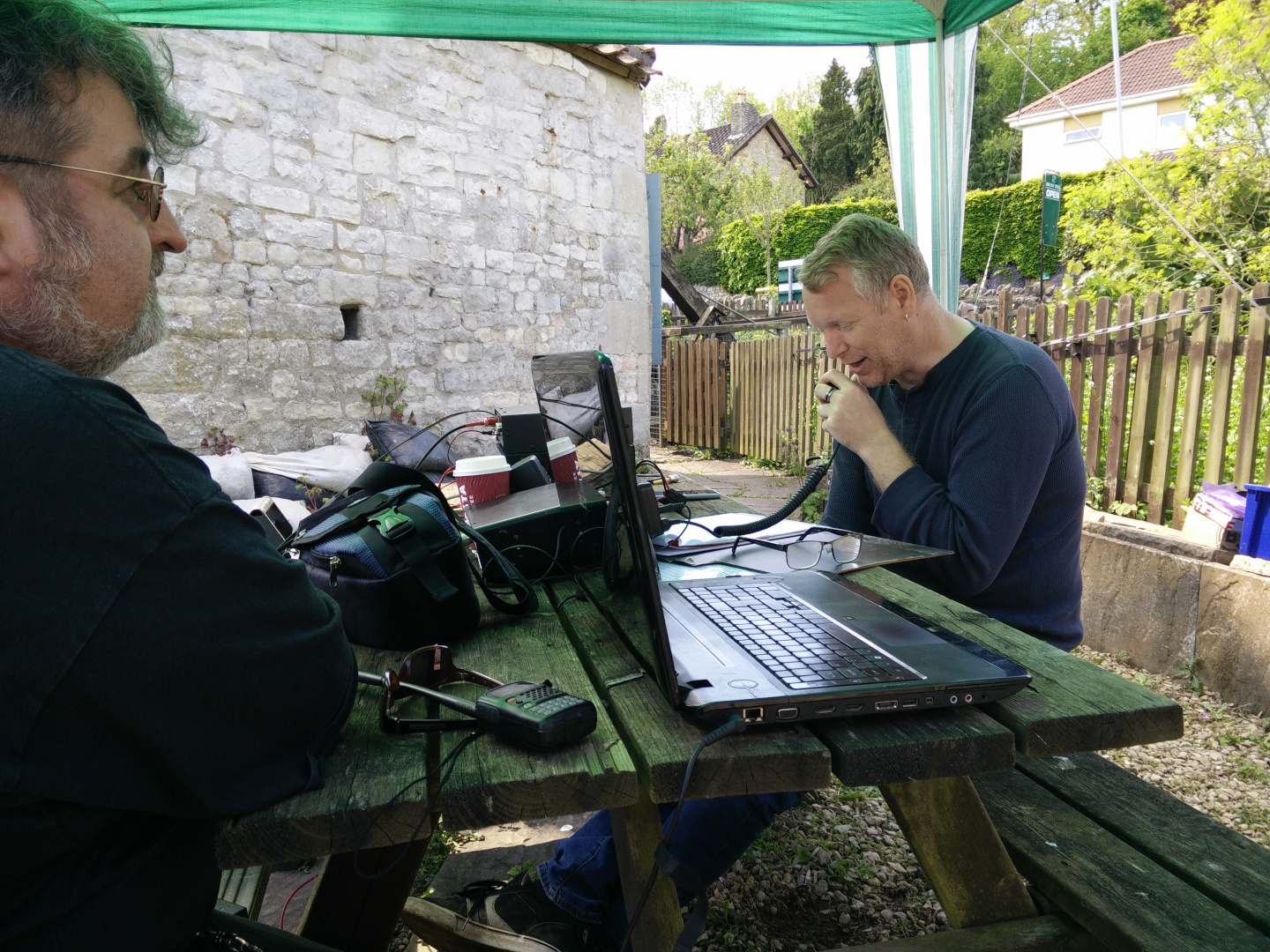 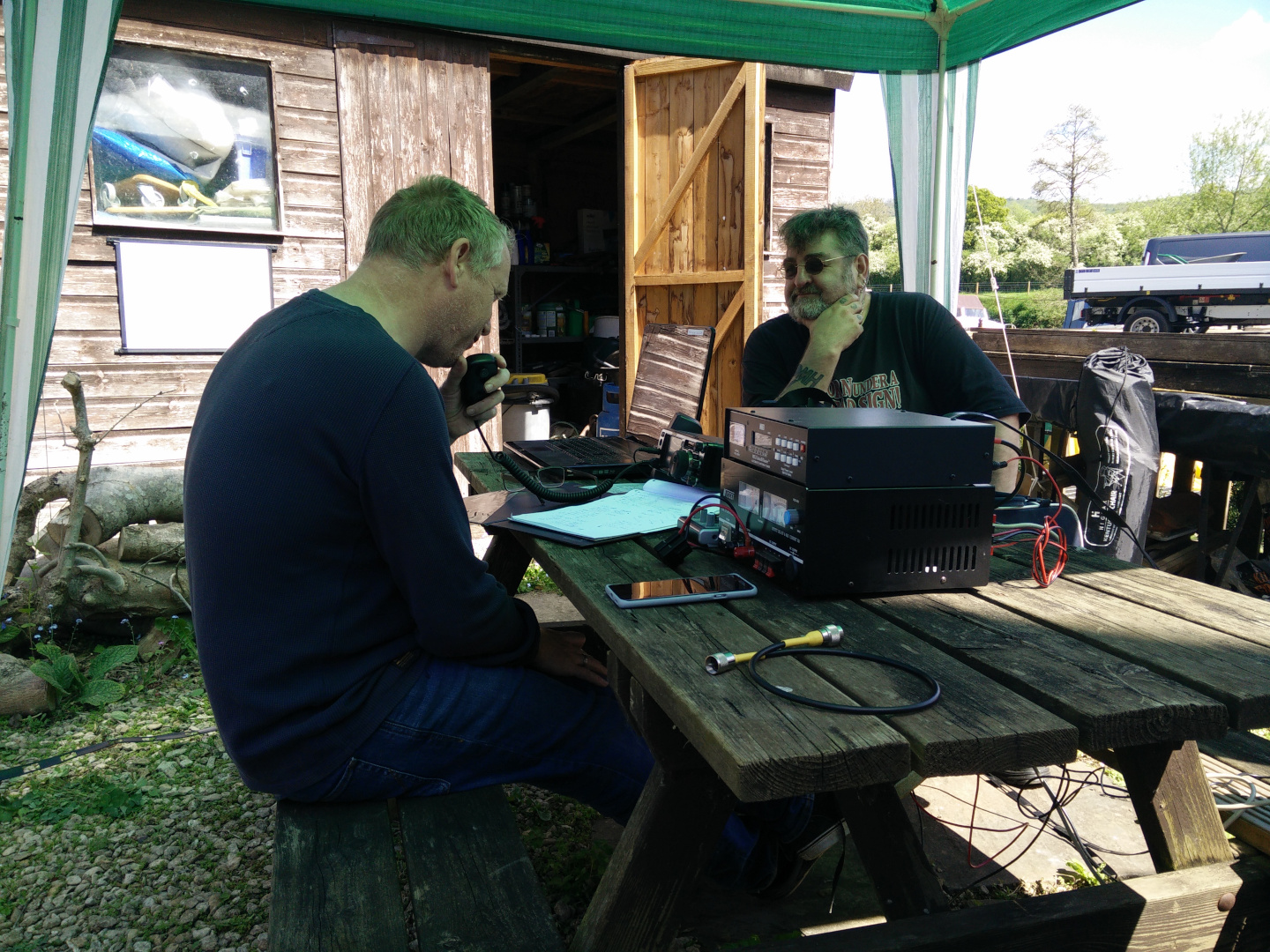 We remained on 40m more or less throughout the day, there was a brief foray onto 20m where there was a contest taking place and we looked at 80m but found this to be much nosier than we remembered at this location. By the end of the day we had made 54 contacts including 11 special event stations registered as participating in Mills on the Air.

The team on Sunday comprised (in no particular order): Mark M0SKV, Robin G3TKF, and Andy G7KNA.

Having bagged Mark 2D0MUP/QRP on the Saturday we were hopeful to try to collect all of the valid Regional Secondary locators. This is something we have always had a mind to do in each of our Special Events and there is some debate which is worthy of a separate assessment and analysis as to whether or not we have ever achieved this. The usual “problem” RSLs are those associated with the Bailiwicks of Jersey and Guernsey (the latter including Alderney and Sark) and the Isle of Man. Having managed to secure the Isle of Man on the Saturday we were keen to work the Channel Islands to complete the set. After much calling we secured the Bailiwick of Guernsey thanks to Malcolm GU0UVH on Alderney but sadly we were unable to collect the remaining Bailiwick of Jersey callsign. Just as we were shutting down Robin was convinced that he’d heard a “GJ” station calling in the pile-up but despite pausing and calling specifically for this station nothing came back. 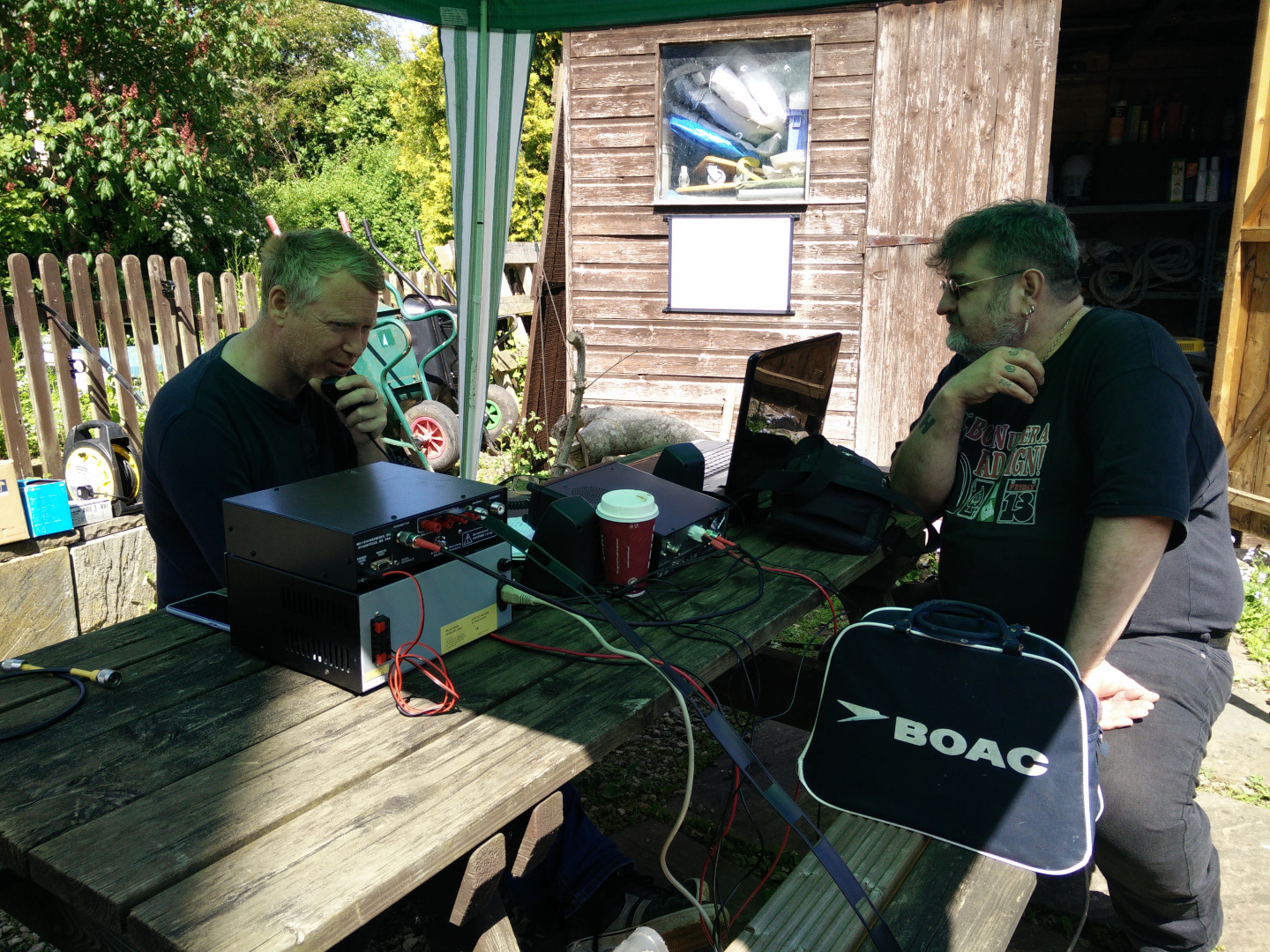 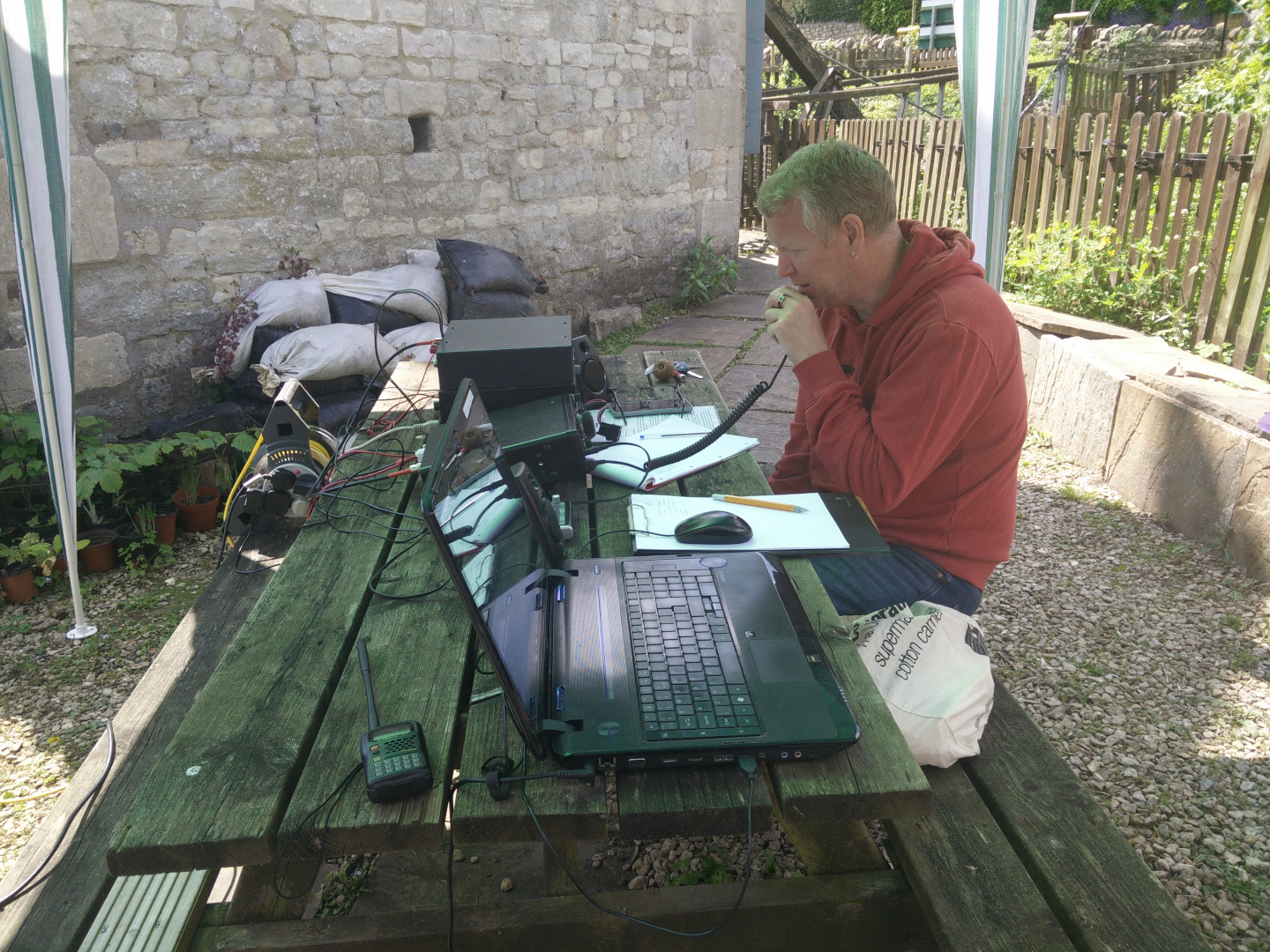 Despite this we did manage to work a further 78 stations including another 5 participating mills operations. This brought our total for the weekend to 132 stations including 16 registered mills stations. As we typically manage around 100 stations over a typical Special Event weekend this was a good number of stations to work and we were the target of a pile-up of varying intensity more or less throughout the day.

Overall we consider this a good opening Special Event and look forward to both Lighthouses on the Air in August and Railways on the Air in September.

Stations Worked During the Operation of GB0SBM from Saltford Brass mill