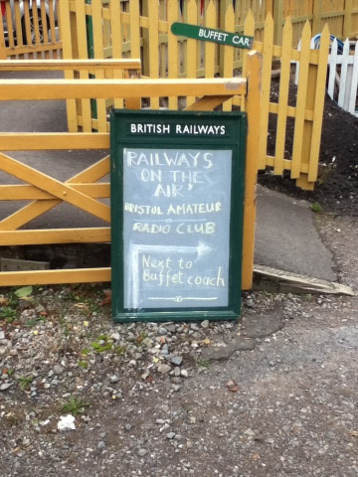 This year the Railways on the Air commemorative weekend took place over the 21st and 22nd of September. As in previous years South Bristol Amateur Radio Club was invited to operate from the Somerset and Dorset Railway Heritage Trust at the Midsomer Norton South Station.

The Trust open the Midsomer Norton South Station every Sunday providing a station shop, 2 museums, buffet coach meals and conducted tours; so if you haven't already paid them a visit or haven't been for a while please consider spending some time in their company.

This is our third year of continuous operation from the Somerset and Dorset Railway Heritage Trust and we have learnt something each year. The big thing we realised from last year was something we were all subliminally aware of which is that in the event of poor weather the platform operation wasn't ideal. In our first year of operation both days had been really nice despite the late September date. Last year although Saturday was good, Sunday was wet and cold.

On the Sunday last year we had looked longingly at the rolling stock that wasn't part of the train rides and concluded that access to a brake van would give us a much better operating location. This offered a number of advantages: there was an open sided area where we could operate or talk to interested people in good weather, there was the covered guards area where we could set up if the weather became unpleasant, and finally the guards van had a stove that could potentially be lit for added warmth (assuming it was still operational).

We asked the Trust if this was a possibility this year. They, however, went one better and located us in the railway carriage next door to the buffet car which forms the café. This was a really good location. Not only did it offer warmth and shelter but it had comfortable seats and tables to form the operating position. It was also one of the areas of the site to receive the heaviest footfall as people visited the café giving us the opportunity to showcase Amateur Radio

We are indebted to the Trust for allowing us to operate from this location. The carriage itself is scheduled for full refurbishment to provide additional facilities for the Trust and staff including a staff rest room and a meeting room. We wish the Trust well with this operation and look forward to operating from the refurbished carriage next year. 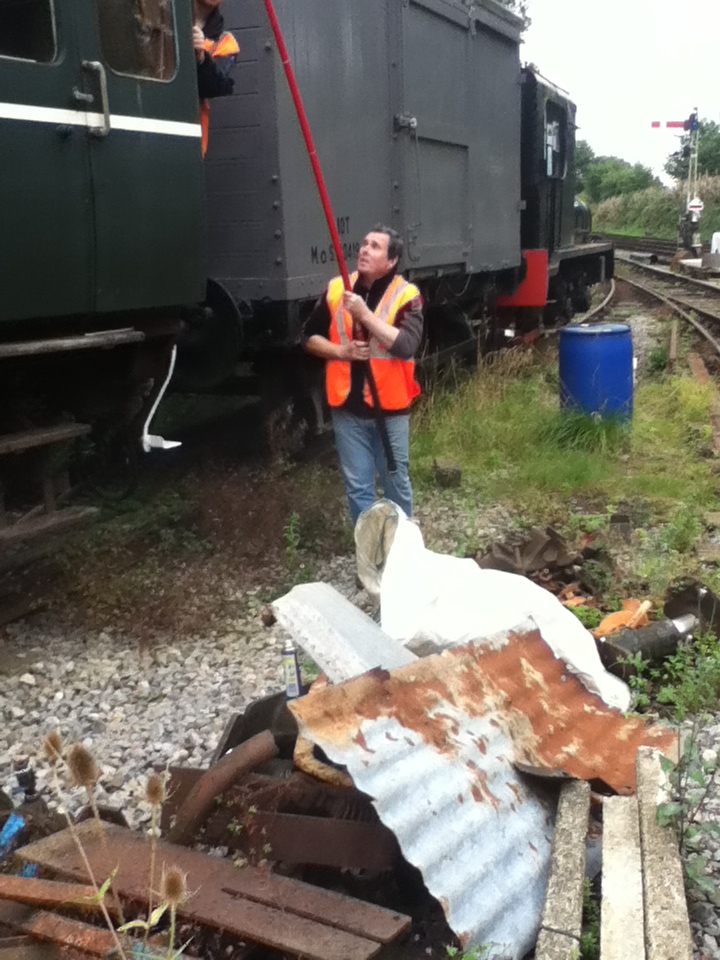 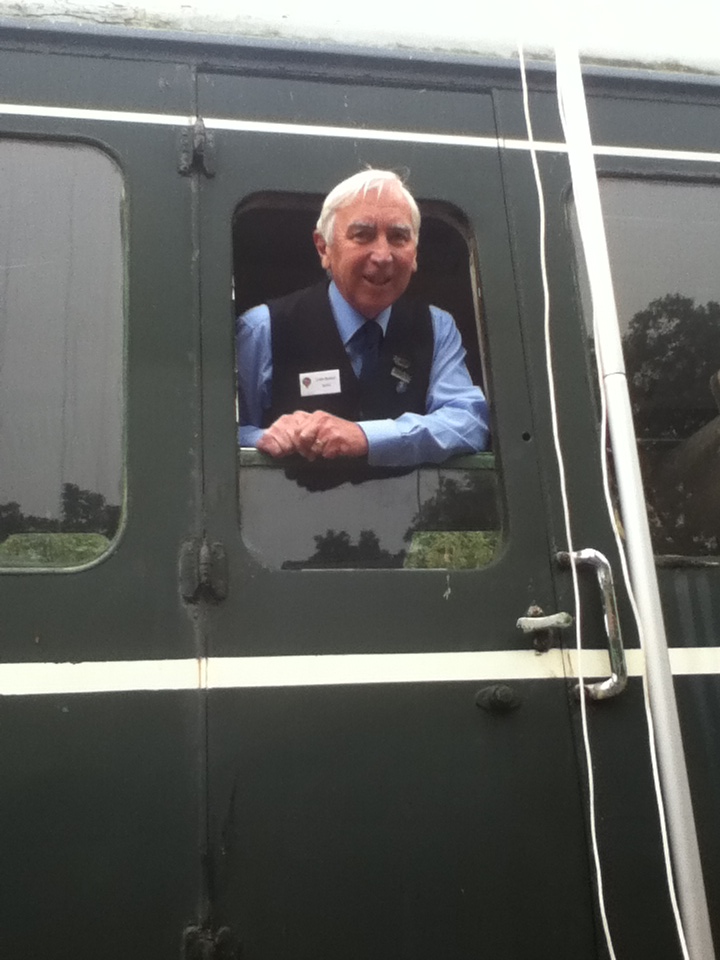 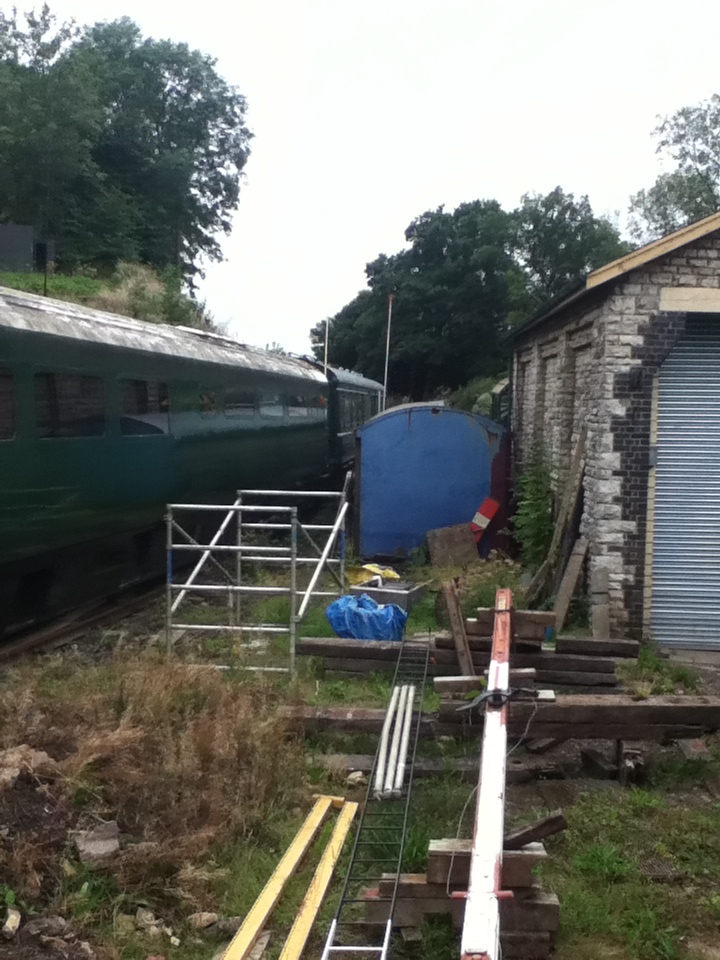 The change of location, from the platform to the carriage, caused some consternation with Saturdays team. They had come prepared for operation from the platform, and despite being trained communicators Andy G7KNA had failed to adequately explain the change to Dave G7BYN. As a result hasty changes of plan replaced the expected horizontal dipole, doublet or long wire antenna planned to be attached to the platform fence to a vertical antenna.

This antenna was not, however, a particularly good choice. Possibly as a result of the angel of radiation or perhaps because it wasn't well grounded the initial performance was not what we expected to see.

During the Saturday, therefore, the antenna went through a bit of a rethink, resulting in a half size G5RV being erected from a couple of roach poles tied to either end of our railway carriage. In this case the roach poles were actually BT measuring poles but they served their modified purpose well and Julian M6JCE is commended for having the foresight to bring these with him and loan them for the operation.

As a result of the antenna issues, Saturday got off to a slow start with only 14 stations in the log, although 7 of these (50%) were Special Event stations associated with Railways on the Air and a further 3 were club stations.

Members of the club came and went throughout the day, in fact some went more than others. In lieu of the usual train rides the Trust were organising escorted walks of the track. Most of our operators decided to take one of these walks on the Saturday afternoon, leaving Henryk M0HTB at the operating post for a couple of hours without any relief as the walk seemed to extend itself into ever more interesting areas. Perhaps this goes some way to accounting for the limited number of contacts on the Saturday in addition to the antenna woes.

We did work our friends and neighbours the North Bristol Radio Club who had set up at the Bitton Steam Railway, and the newly reformed Mid-Somerset ARC who were operating from the East Somerset Railway. 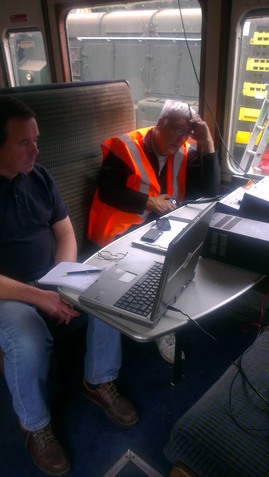 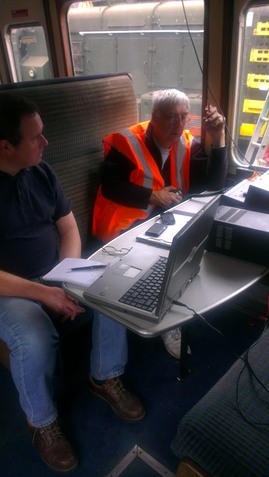 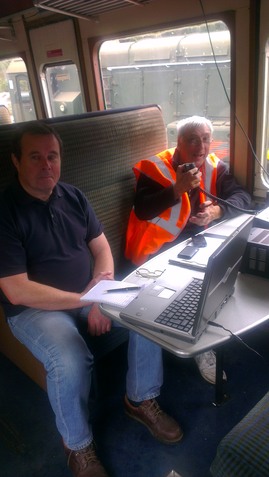 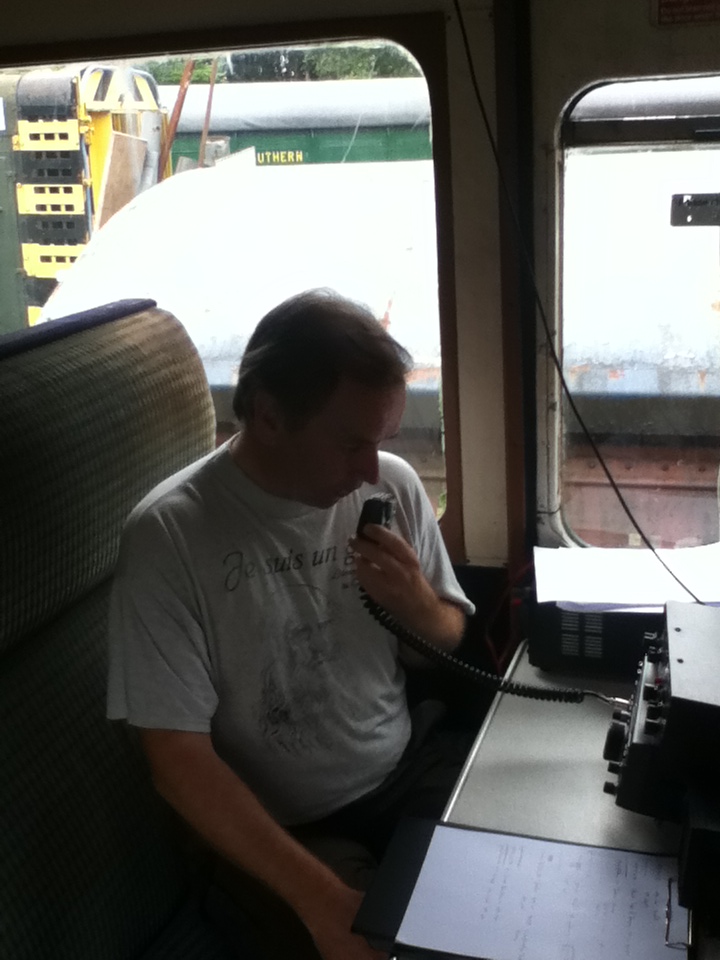 The Lundy DXpedition team had returned to the mainland yesterday so there were additional operators available for the Sunday shift.

This, combined with the now resolved antenna choices and the fact that everyone had been on the escorted walks, meant that we were fully geared up for our normal operation. Starting about 10:00 we began searching for other RotA operations.

Nene Valley was quite important to us as it is now supported by David M0DFW who remains a life member of the Somerset and Dorset Railway Heritage Trust and was the person responsible for our introduction to the Trust. He now lives in Cambridgeshire and is active with the Nene Valley Railway. We worked David direct towards the end of the day.

After spending the morning hunting and pouncing up and down the 40m band we selected a clear spot towards the top of the band around 14:00 and started calling CQ, allowing those individuals looking for RotA operations to find and work us.

This part of our operation was also a success and typically we were flat out towards the end of the day with mini pile-ups occurring at various times in the afternoon.

Overall we managed to work a total of 94 radio stations, although there were a small number of duplicates in this list. There were 18 confirmed RotA operations and several other Special Event and Club Callsigns bagged.