The weekend of 26/27 September, aside from being the weekend of the National Hamfest, is the weekend set aside for Railways on the Air. This is our fifth year of operation from the Somerset and Dorset Railway Heritage Trust at Midsomer Norton and to coincide with the planned re-introduction of train operations we are hoping to be able to put on a larger display of Amateur Radio activities.

So, at precisely a little after 09:00 on Saturday 26 September 2015 we began to assemble at the restored Midsomer Norton South Station and began to set up the HF SSB station. The aim was to be on air sometime around 10:00 and we believed that with our experience from previous years and sufficient hands this would be straightforward.

Whilst the setting up of the equipment in the railway carriage that was to be our home for the next couple of days went reasonably smoothly antenna erection was a little more complicated than originally envisaged.

Before we go into the antenna there was one amusing little incident inside the railway carriage. Andy G7KNA was connecting the rig, power supply, ATU, laptop etc. He switched on the laptop which hadn't been used since the Lighthouses weekend in August and prepared to load the logging program. The laptop dutifully started up and whilst waiting for Windows XP (yes really our laptop is that old!) he switched on the PSU. Or rather he didn't, because no amount of switch clicking would bring a spark of life from the trusty Manson 925 unit. Everyone automatically went into diagnostic mode: must have power because the laptop is working, check cables, is plug fully inserted in extension lead, check fuses etc. Before too much was dismantled David G7BYN pointed out that the socket where the extension lead was plugged in wasn't turned on and the laptop despite being in store for 5 weeks or so was actually booting off its internal battery!

And so to our antenna. This part of the tale is probably cautionary, in that by deviating from our usual proven arrangements we accidentally introduced a raft of new problems.

Time to be an anorak, but bear with us, not only is this interesting it's also informative!

The key point, in case you hadn't realised, is that a half size G5RV at 15.63m (51.3ft) long is just 4m (13.2ft) shorter than a Mark 2 carriage which makes it very easy to suspend from a couple of roach poles temporarily fixed to the ends of the operating carriage and a freestanding 20ft flagpole to support the centre section held in place by some suitable scrap track lengths.

The situation described above had been successfully used for the past 2 years. But we failed to heed the adage "if it ain't broke don't fix it" and decided that what we needed this year was a full size G5RV 31.26m (102.6ft) long erected over two carriages.

The theory was fine, the centre feed point was hoisted using a 6.1m (20ft) flag pole, but as railway carriages are around 3.79m (12ft 5in) rail to roof the feedpoint was only around 2.3m (7.5ft) above the roof of the carriage. The ends of the antenna were tied off to convenient fixing points comprising a container at one end and the coupling of a goods wagon at the other end. The ends were, however, considerably closer to the roof of the carriages than the feedpoint and it is considered that this was the root cause of the problems we subsequently faced.

We believe that the carriages were in some way coupling with the antenna as it proved next to impossible to match the antenna on 40m using either a manual or automatic tuner. Although the auto tuner would find some sort of match it wasn't stable, often re-tuning on each over. 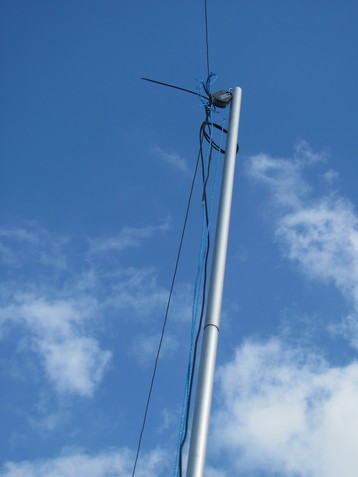 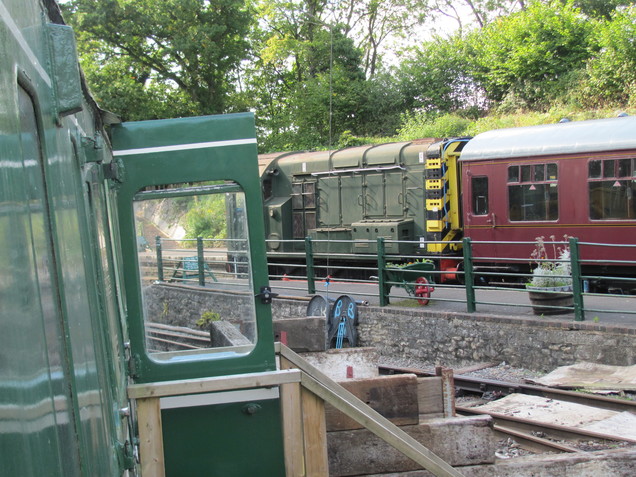 The full size G5RV was abandoned in favour of a simple half wave dipole on 40m. This was better but the antenna had been hastily erected and was low to the ground and shielded by the carriages and buildings and was fed with coax without the benefit of a balun. The result was an antenna that did get a signal out but the noise floor made anything but the strongest of stations inaudible. 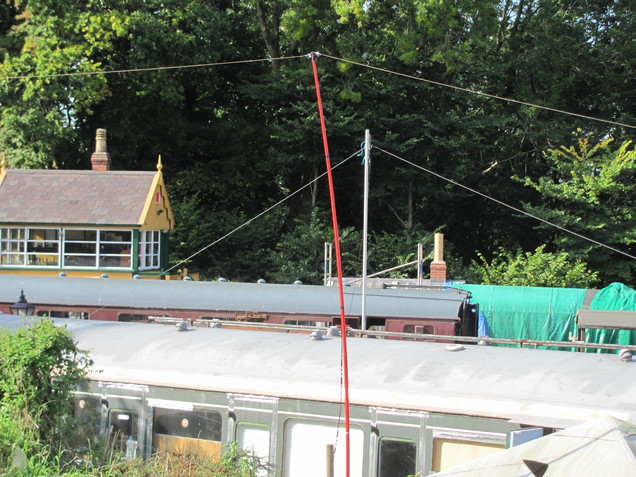 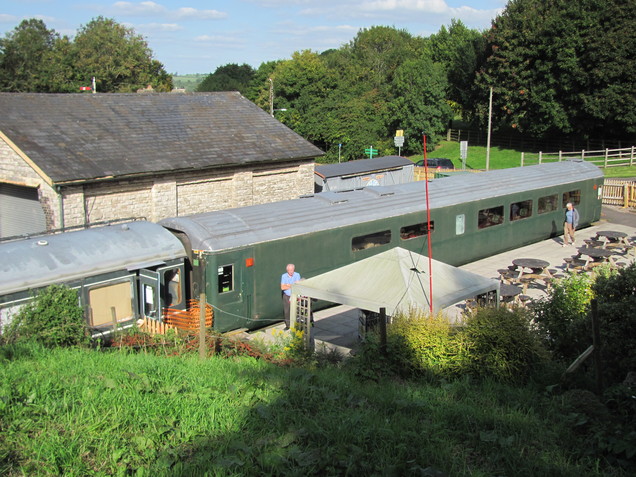 We persevered with this arrangement for a short while whilst trying to come up with an alternative or indeed a reason why the original arrangement hadn't worked. Cyril G3XED and Eddie M0LJT decided to re-erect the full size G5RV away from the carriages some 3m (10ft) or so at the other side of the outdoor seating area. This proved to be a good choice. Once put up and connected the noise floor dropped to a manageable level and our signal improved. 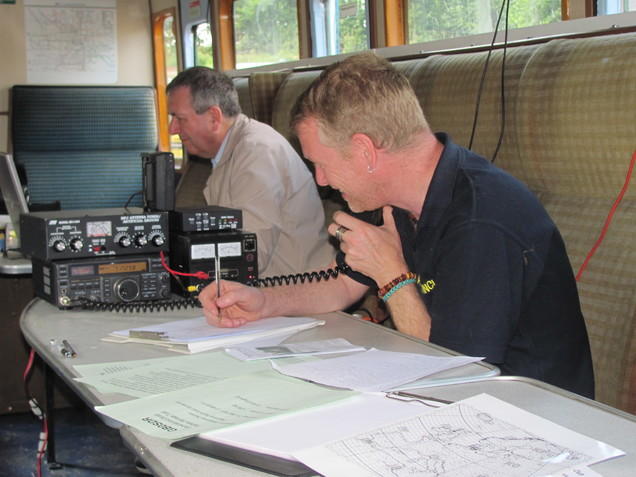 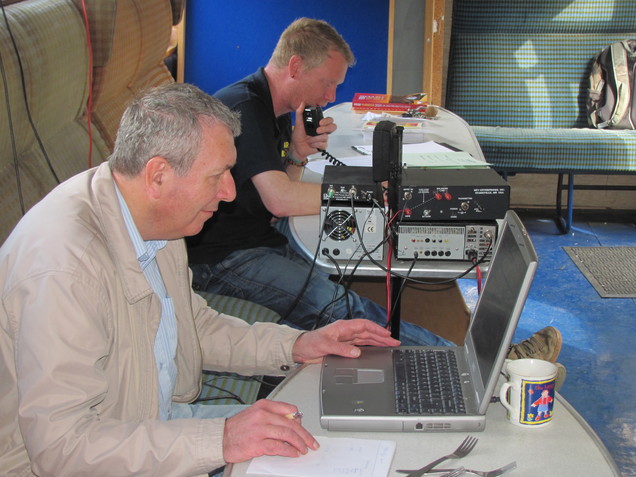 On Sunday, having resolved the antenna issues for the main SSB station on Saturday it was possible to: 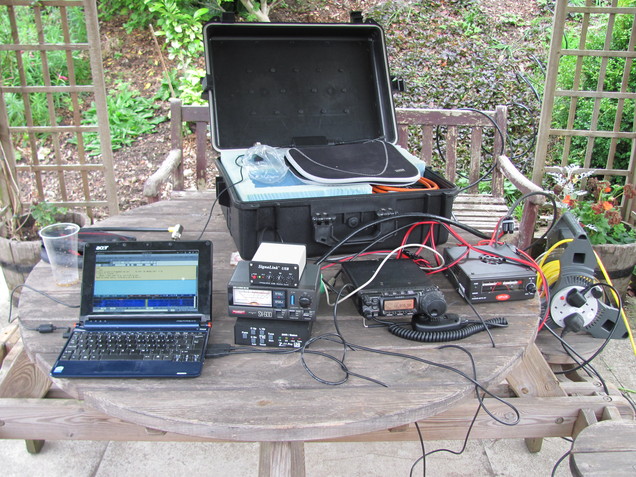 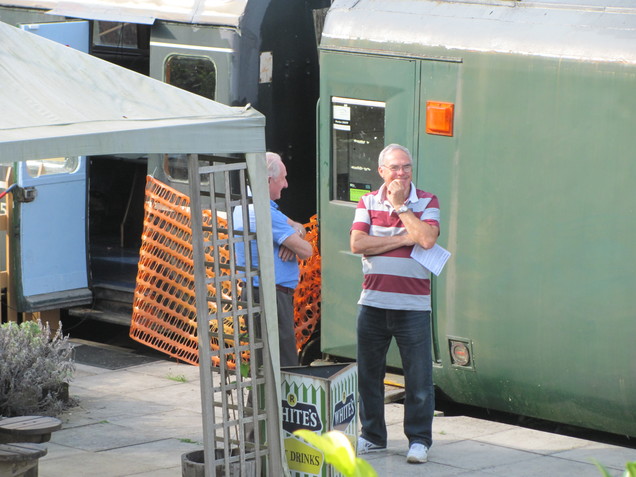 One of the downsides of the final position of the full size G5RV is that it precluded the use of the Delta Loop antenna for the data station as in last years experiments this had been set up more or less where the G5RV was now sited. 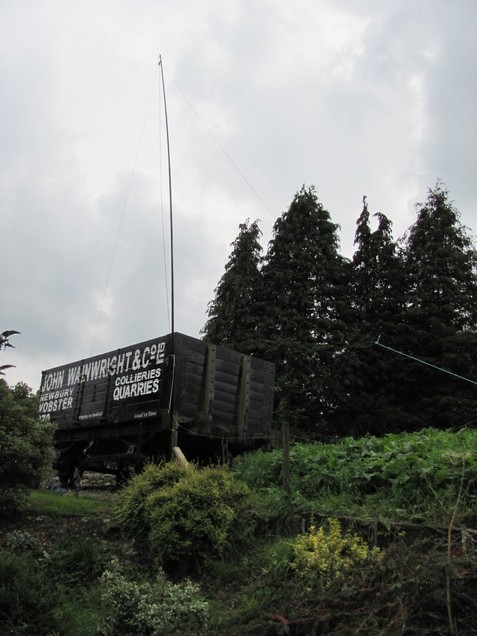 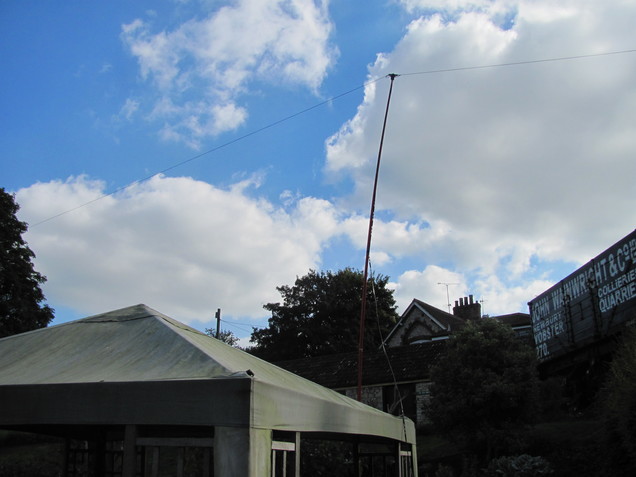 The planned Delta Loop antenna was replaced with a 20m whip affixed by mag mount to Dave G7BYNs van in the upper car park. This was a compromise and exhibited a higher than desirable SWR but at least allowed the data station to get on air and make some contacts. After the event it was decided that if we have to follow this layout next year it will be more efficient to situate the data station in the lower car park and operate out of the boot of an estate car or van allowing a better antenna to be erected even if it is a little lower since it is felt that a better antenna will more than offset the loss in elevation.