The RSGB have published the ‘1st Annual Report of the RSGB Examination Standards Committee, April 2016’.

The full report can be found here.

Headlines for the report are as follows:

Numbers sitting all three exams are marginally down on 2014

It is not possible, from the basic statistics provided in the report, to ascertain or estimate the proportion of Foundation students progressing to the Intermediate Exam or indeed the number of Intermediate students progressing to the Advanced exam as the data does nor indicate how many of each exam were re-sits and of course the progression could have taken more than a year. Thus it is entirely possible that people who passed their Foundation exam before 2015 did not take their Intermediate exam until 2015.

Of the total 2861 candidates 51 (1.78%) required special access arrangements including readers, large print and no images.

15 irregularities were reported out of the 1090 exam sessions held. The report acknowledges that the RSGB has not yet achieved its target of auditing 10% of the exams taking place, something that is likely to be harder to achieve over time if the trend in reducing exam sizes continues. Significantly the report does not indicate what proportion of the exams were inspected, but if it was say 5% of the 1090 exams held then the irregularities, assuming they were all unique, amount to over a quarter of all exams inspected having some form of irregularity or deviation from the accepted methods and practice. Some of the identified irregularities were minor, for instance:

Although in fairness to the Exam Standards Committee these minor infringements were not specifically itemised in the total of 15 incidents detailed in the report.

From the itemised irregularities forming the total of 15 mentioned were:

About Andy (G7KNA) 119 Articles
BEng CEng MICE. Chartered Civil Engineer and Licensed Radio Ham (G7KNA). Member of South Bristol Amateur Radio Club since 2005 and Secretary since 2010. I am a registered RSGB Assessor for Foundation, Intermediate and Advanced Exams. Away from the club and work I play with computers and related gadgets exploring Open Source software and when necessary bodge the odd DIY project. 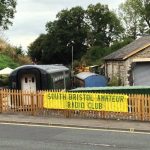 Railways on the Air